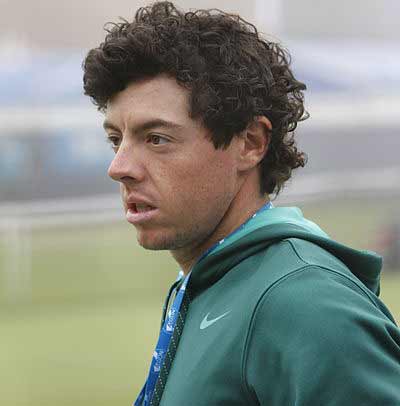 Rory McIlroy MBE (born 4 May 1989) is a professional golfer from Northern Ireland who is a member of both the European and PGA Tours. He is a former world number one in the Official World Golf Ranking, having spent over 100 weeks in that position during his career. He is a four-time major champion, winning the 2011 U.S Open, 2012 PGA Championship, 2014 Open Championship, and 2014 PGA Championship. Along with Jack Nicklaus and Tiger Woods, he is one of three players to win four majors by the age of 25..

Born in Holywood, County Down, Northern Ireland, McIlroy is the only child of Rosie McDonald and Gerry McIlroy. He attended St. Patrick’s Primary School and then Sullivan Upper School.

He was introduced to golf at an exceptionally young age by his father, who coached him. Gerry McIlroy is a fine golfer himself, who once played at a scratch handicap level. He asked his father virtually every day to take him to Holywood Golf Club. Family lore relates that he received a new golf club as a present, being shown the correct grip by his father, then taking the club to bed with him that night, with his hands holding the club properly. McIlroy joined Holywood Golf Club and became the youngest member at the club at age seven. A video on golf technique produced by champion Nick Faldo was his early favourite.

McIlroy’s father held down several jobs to earn additional income for his son’s golf development. His mother worked extra shifts at the local 3M plant. McIlroy’s first significant international victory came in the World Championship for the 9–10 age group bracket at the Doral Golf Resort & Spa in Miami, Florida. He learned his early golf at the Holywood Golf Club, which he still retains as his home course. He started his early training with Michael Bannon, previously the Golf Professional of Holywood Golf Club, who is also his current coach and dedicated mentor.

McIlroy was raised Roman Catholic and has self-identified as Irish, Northern Irish, and British. He carries a British passport, although he usually is reluctant to discuss his nationality at length.

On 18 June 2014, McIlroy declared that he would represent Ireland (if he qualified) at the 2016 Olympic Summer Games, where golf became an Olympic event for the first time since 1904. In 2012 he had expressed an interest in representing Great Britain as opposed to Ireland; however, in January 2013 he was considering the options of playing for Britain or Ireland or not playing at all, stating; “I just think being from where we’re from, we’re placed in a very difficult position. I feel Northern Irish and obviously being from Northern Ireland you have a connection to Ireland and a connection to the UK. If I could and there was a Northern Irish team I’d play for Northern Ireland. Play for one side or the other – or not play at all because I may upset too many people… Those are my three options I’m considering very carefully”, before choosing Ireland in 2014.

McIlroy lived near the village of Moneyreagh in County Down, about 20 minutes from Belfast. The land around his home included a custom-made practice facility and a scaled-down football pitch. In September 2012, the house was put up for sale for a price of £2 million. In December 2012, McIlroy purchased a $10 million property in Palm Beach Gardens, Florida, located close to Jack Nicklaus’ The Bear’s Club.

McIlroy is an Ambassador for UNICEF Ireland and made his first visit to Haiti with UNICEF in June 2011. In 2014, McIlroy was also announced as an official ambassador for PGA Junior League Golf. His great-uncle Joe McIlroy was killed by the Ulster Volunteer Force in a sectarian attack at his east Belfast home in November 1972.

McIlroy is a fan of Manchester United F.C. In his acceptance speech following his 2014 Open Championship win at Royal Liverpool, McIlroy addressed the crowd by joking; “Even though I’m a Man United fan standing here,” which saw him booed in jest by archrival Liverpool fans, before he thanked them for their great support. McIlroy is a fan of the Northern Ireland national team. When Northern Ireland played against world champions Germany in a Euro 2016 match, he went to Paris to attend that match. McIlroy plays the sport in his spare time. He injured ankle ligaments in 2015 while playing football with friends which forced him to miss the 2015 Open Championship, but later stated he would not give up playing football.

McIlroy is a fan of Ulster Rugby and often interrupts his busy golfing schedule to attend rugby matches at Kingspan Stadium, formerly Ravenhill Stadium in Belfast.

McIlroy was appointed Member of the Order of the British Empire (MBE) in the 2012 New Year Honours for services to sport.

According to the 2017 Forbes’ list of the world’s highest-paid athletes, McIlroy was the joint sixth highest paid sportsperson that year, having earned US$50 million, of which $34 million came from endorsements. McIlroy created a new company, Rory McIlroy Inc, in March 2015. The new company, headed by Donal Casey, manages the royalty payments from his various endorsements.

In February 2018, McIlroy appeared on an episode of Amazon Prime show The Grand Tour, racing against Paris Hilton in the ‘Celebrity Face-Off’ segment of the show.

McIlroy dated Danish tennis professional Caroline Wozniacki from 2011 to 2014. They became engaged on 31 December 2013. On 21 May 2014, it was announced that McIlroy had ended the engagement: “The problem is mine. The wedding invitations issued at the weekend made me realise that I wasn’t ready for all that marriage entails. I wish Caroline all the happiness she deserves and thank her for the great times we’ve had.” Wozniacki later stated that McIlroy had ended the relationship through a brief phone call, and had not contacted her since.

McIlroy started dating a former PGA of America employee, Erica Stoll, in 2015. In December 2015, they became engaged while on holiday in Paris. They married in April 2017 at Ashford Castle in Cong, County Mayo.