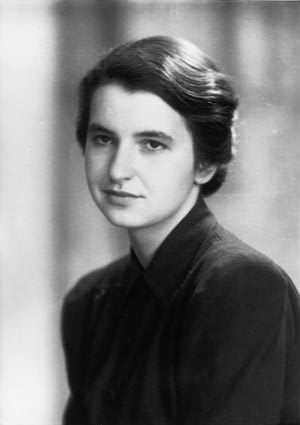 Rosalind Elsie Franklin (25 July 1920 – 16 April 1958) was an English chemist and X-ray crystallographer whose work was central to the understanding of the molecular structures of DNA (deoxyribonucleic acid), RNA (ribonucleic acid), viruses, coal, and graphite. Although her works on coal and viruses were appreciated in her lifetime, her contributions to the discovery of the structure of DNA were largely recognised posthumously.

Franklin was educated at a private day school at Norland Place in West London, Lindores School for Young Ladies in Sussex, and St Paul’s Girls’ School, London. Then she studied the Natural Sciences Tripos at Newnham College, Cambridge, from which she graduated in 1941. Earning a research fellowship, she joined the University of Cambridge physical chemistry laboratory under Ronald George Wreyford Norrish, who disappointed her for his lack of enthusiasm. The British Coal Utilisation Research Association (BCURA) offered her a research position in 1942 and started her work on coals. This helped her earn a Ph.D. in 1945. She went to Paris in 1947 as a chercheur (postdoctoral researcher) under Jacques Mering at the Laboratoire Central des Services Chimiques de l’Etat, where she became an accomplished X-ray crystallographer. She became a research associate at King’s College London in 1951 and worked on X-ray diffraction studies, which would eventually facilitate the discovery of the double helix structure of DNA.[5] In 1953, after two years, owing to disagreement with her director John Randall and more so with her colleague Maurice Wilkins, she was compelled to move to Birkbeck College. At Birkbeck, John Desmond Bernal, chair of the physics department, offered her a separate research team. She died in 1958 at the age of 37 of ovarian cancer.

Franklin is best known for her work on the X-ray diffraction images of DNA, particularly Photo 51, while at King’s College London, which led to the discovery of the DNA double helix for which James Watson, Francis Crick and Maurice Wilkins shared the Nobel Prize in Physiology or Medicine in 1962. Watson suggested that Franklin would have ideally been awarded a Nobel Prize in Chemistry, along with Wilkins, but, although there was not yet a rule against posthumous awards, the Nobel Committee generally did not make posthumous nominations.

After finishing her work on DNA, Franklin led pioneering work at Birkbeck on the molecular structures of viruses. Her team member Aaron Klug continued her research, winning the Nobel Prize in Chemistry in 1982.

Franklin was born on 25 July 1920 in 50 Chepstow Villas, Notting Hill, London, into an affluent and influential British Jewish family. Her father was Ellis Arthur Franklin (1894–1964), a politically liberal London merchant banker who taught at the city’s Working Men’s College, and her mother was Muriel Frances Waley (1894–1976). Rosalind was the elder daughter and the second child in the family of five children. David (born 1919) was the eldest brother; Colin (1923-2020), Roland (born 1926), and Jenifer (born 1929) were her younger siblings. Her father’s uncle was Herbert Samuel (later Viscount Samuel), who was the Home Secretary in 1916 and the first practising Jew to serve in the British Cabinet. Her aunt, Helen Caroline Franklin, known in the family as Mamie, was married to Norman de Mattos Bentwich, who was the Attorney General in the British Mandate of Palestine. Helen Caroline Franklin was active in trade union organisation and the women’s suffrage movement, and was later a member of the London County Council. Her uncle, Hugh Franklin, was another prominent figure in the suffrage movement, although his actions therein embarrassed the Franklin family. Rosalind’s middle name, “Elsie”, was in memory of Hugh’s first wife, who died in the 1918 flu pandemic. Her family was actively involved with the Working Men’s College, where her father taught the subjects of electricity, magnetism, and the history of the Great War in the evenings, later becoming the vice-principal.

Franklin’s parents helped settle Jewish refugees from Europe who had escaped the Nazis, particularly those from the Kindertransport. They took in two Jewish children to their home, and one of them, a nine-year-old Austrian, Evi Eisenstädter, shared Jenifer’s room. (Evi’s father Hans Mathias Eisenstädter had been imprisoned in Buchenwald, and after liberation, the family adopted the surname “Ellis”.)

From early childhood, Franklin showed exceptional scholastic abilities. At the age of six, she joined her brother Roland at Norland Place School, a private day school in West London. At that time, her aunt Mamie (Helen Bentwich), described her to her husband: “Rosalind is alarmingly clever – she spends all her time doing arithmetic for pleasure, and invariably gets her sums right.” She also developed an early interest in cricket and hockey. At the age of nine, she entered a boarding-school, Lindores School for Young Ladies in Sussex. The school was near the seaside, and the family wanted a good environment for her delicate health.

She was 11 when she went to St Paul’s Girls’ School in Hammersmith, west London, one of the few girls’ schools in London that taught physics and chemistry. At St Paul’s she excelled in science, Latin, and sports. She also learned German, and became fluent in French, a language she would later find useful. She topped her classes, and won annual awards. Her only educational weakness was in music, for which the school music director, the composer Gustav Holst, once called upon her mother to inquire whether she might have suffered from hearing problem or tonsillitis. With six distinctions, she passed her matriculation in 1938, winning a scholarship for university, the School Leaving Exhibition of £30 a year for three years, and £5 from her grandfather. Her father asked her to give the scholarship to a deserving refugee student.

In mid-1956, while on a work-related trip to the United States, Franklin first began to suspect a health problem. While in New York she found difficulty in zipping her skirt; her stomach had bulged. Back in London she consulted Mair Livingstone, who asked her, “You’re not pregnant?” to which she retorted, “I wish I were.” Her case was marked “URGENT”. An operation on 4 September of the same year revealed two tumours in her abdomen. After this period and other periods of hospitalisation, Franklin spent time convalescing with various friends and family members. These included Anne Sayre, Francis Crick, his wife Odile, with whom Franklin had formed a strong friendship, and finally with the Roland and Nina Franklin family where Rosalind’s nieces and nephews bolstered her spirits.

Franklin chose not to stay with her parents because her mother’s uncontrollable grief and crying upset her too much. Even while undergoing cancer treatment, Franklin continued to work, and her group continued to produce results – seven papers in 1956 and six more in 1957. At the end of 1957, Franklin again fell ill and she was admitted to the Royal Marsden Hospital. On 2 December, she made her will. She named her three brothers as executors and made her colleague Aaron Klug the principal beneficiary, who would receive £3,000 and her Austin car. Her other friends Mair Livingstone would get £2,000, Anne Piper £1,000, and her nurse Miss Griffith £250. The remainder of the estate was to be used for charities.

She returned to work in January 1958, and she was given a promotion to Research Associate in Biophysics on 25 February. She fell ill again on 30 March, and she died on 16 April 1958, in Chelsea, London, of bronchopneumonia, secondary carcinomatosis, and ovarian cancer. Exposure to X-ray radiation is sometimes considered to be a possible factor in her illness.

Other members of her family have died of cancer, and the incidence of gynaecological cancer is known to be disproportionately high among Ashkenazi Jews. Her death certificate states: A Research Scientist, Spinster, Daughter of Ellis Arthur Franklin, a Banker. She was interred on 17 April 1958 in the family plot at Willesden United Synagogue Cemetery at Beaconsfield Road in London Borough of Brent. The inscription on her tombstone reads:

In 2017 Historic England recognised the significance of Franklin’s tomb at Willesden Jewish Cemetery, listing it at Grade II as a historic monument.