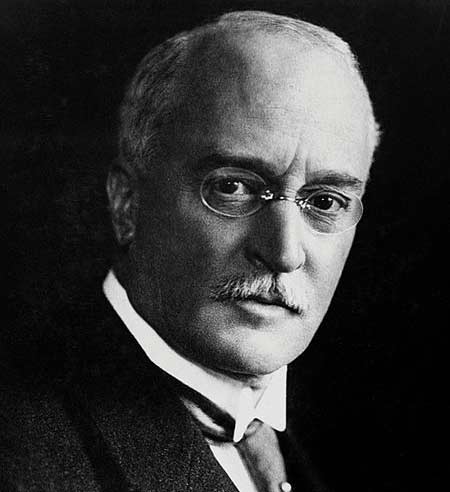 Rudolf Christian Karl Diesel (18 March 1858 – 29 September 1913) was a German inventor and mechanical engineer, famous for the invention of the Diesel engine, and for his suspicious death at sea. Diesel was the namesake of the 1942 film Diesel.

Diesel was born in the house Rue Notre Dame de Nazareth No. 38 in Paris, France in 1858 the second of three children of Elise (née Strobel) and Theodor Diesel. His parents were Bavarian immigrants living in Paris. Theodor Diesel, a bookbinder by trade, left his home town of Augsburg, Bavaria, in 1848. He met his wife, a daughter of a Nuremberg merchant, in Paris in 1855 and became a leather goods manufacturer there.

Only few weeks after his birth, Diesel was given away to a Vincennes farmer family, where he spent his first nine months. When he was returned to his family, they moved into the flat 49 in the Rue de la Fontaine-au-Roi. At the time, the Diesel family suffered from financial difficulties, thus young Rudolf Diesel had to work in his father’s workshop and deliver leather goods to customers using a barrow. He attended a Protestant-French school and soon became interested in social questions and technology.[5] Being a very good student, 12-year-old Diesel received the Société pour l’Instruction Elémentaire bronze medal and had plans to enter Ecole Primaire Supérieure in 1870.

At the outbreak of the Franco-Prussian War the same year, his family was forced to leave, as were many other Germans. They settled in London, England, where Diesel attended an English school. Before the war’s end, however, Diesel’s mother sent 12-year-old Rudolf to Augsburg to live with his aunt and uncle, Barbara and Christoph Barnickel, to become fluent in German and to visit the Königliche Kreis-Gewerbeschule (Royal County Vocational College), where his uncle taught mathematics.

At the age of 14, Diesel wrote a letter to his parents saying that he wanted to become an engineer. After finishing his basic education at the top of his class in 1873, he enrolled at the newly founded Industrial School of Augsburg. Two years later, he received a merit scholarship from the Royal Bavarian Polytechnic of Munich, which he accepted against the wishes of his parents, who would rather have seen him start to work.

One of Diesel’s professors in Munich was Carl von Linde. Diesel was unable to graduate with his class in July 1879 because he fell ill with typhoid fever. While waiting for the next examination date, he gained practical engineering experience at the Sulzer Brothers Machine Works in Winterthur, Switzerland. Diesel graduated in January 1880 with highest academic honours and returned to Paris, where he assisted his former Munich professor, Carl von Linde, with the design and construction of a modern refrigeration and ice plant. Diesel became the director of the plant one year later.

In 1883, Diesel married Martha Flasche, and continued to work for Linde, gaining numerous patents in both Germany and France.

In early 1890, Diesel moved to Berlin with his wife and children, Rudolf Jr, Heddy, and Eugen, to assume management of Linde’s corporate research and development department and to join several other corporate boards there. As he was not allowed to use the patents he developed while an employee of Linde’s for his own purposes, he expanded beyond the field of refrigeration. He first worked with steam, his research into thermal efficiency and fuel efficiency leading him to build a steam engine using ammonia vapour. During tests, however, the engine exploded and almost killed him. His research into high compression cylinder pressures tested the strength of iron and steel cylinder heads. One exploded during a run in. He spent many months in a hospital, followed by health and eyesight problems.

Ever since attending lectures of Carl von Linde, Diesel intended designing an internal combustion engine that could approach the maximum theoretical thermal efficiency of the Carnot cycle. He worked on this idea for several years, and in 1892, he considered his theory to be completed. The same year, Diesel was given the German patent DRP 67207. In 1893, he published a treatise entitled Theory and Construction of a Rational Heat-engine to Replace the Steam Engine and The Combustion Engines Known Today, that he had been working on since early 1892. This treatise formed the basis for his work on and invention of the Diesel engine. By summer 1893, Diesel had realised that his initial theory was erroneous, which led him to file another patent application for the corrected theory in 1893.

Diesel understood thermodynamics and the theoretical and practical constraints on fuel efficiency. He knew that as much as 90% of the energy available in the fuel is wasted in a steam engine. His work in engine design was driven by the goal of much higher efficiency ratios. In his engine, fuel was injected at the end of the compression stroke and was ignited by the high temperature resulting from the compression. From 1893 to 1897, Heinrich von Buz, director of MAN SE in Augsburg, gave Rudolf Diesel the opportunity to test and develop his ideas.

The first successful Diesel engine ran in 1897 and is now on display at the German Technical Museum in Munich.

Rudolf Diesel obtained patents for his design in Germany and other countries, including the United States.

He was inducted into the Automotive Hall of Fame in 1978.