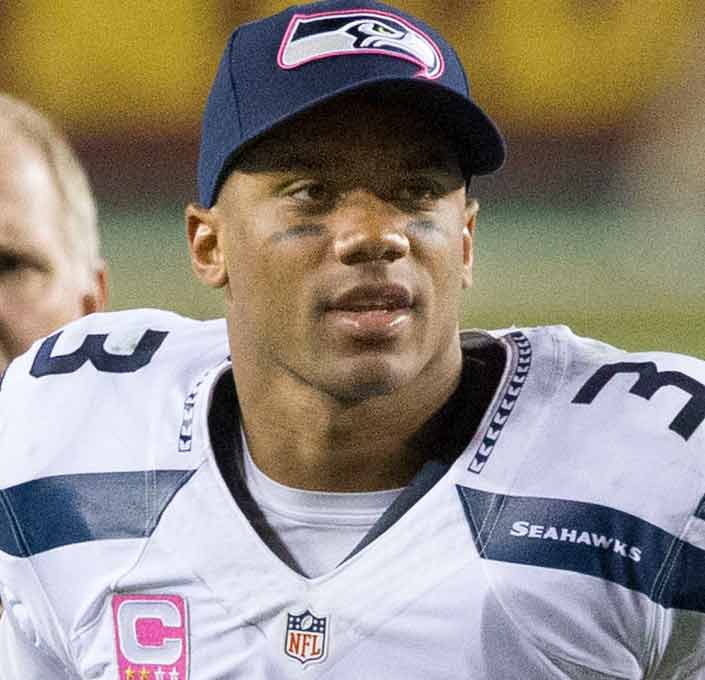 Russell Carrington Wilson (born November 29, 1988) is an American football quarterback for the Seattle Seahawks of the National Football League (NFL).

Wilson initially played football and baseball for North Carolina State University from 2008 to 2010 before transferring to Wisconsin. He played college football for the University of Wisconsin during the 2011 season, in which he set the single-season FBS record for passing efficiency (191.8) and led the team to a Big Ten title and the 2012 Rose Bowl. He also played minor league baseball for the Tri-City Dust Devils in 2010 and the Asheville Tourists in 2011 as a second baseman, and as of 2019 his professional baseball rights are held by the Trenton Thunder, a Double-A affiliate of the New York Yankees.

He was selected by the Seahawks with the 12th pick in the third round (75th overall) of the 2012 NFL Draft. After beating out Matt Flynn for the starting job during training camp, Wilson ended up having a successful debut season, tying Peyton Manning’s then record for most passing touchdowns by a rookie (26) and was named the Pepsi NFL Rookie of the Year.

Wilson has been named to seven Pro Bowls and has started in two Super Bowls, winning Super Bowl XLVIII. He holds the record for most wins by an NFL quarterback through seven seasons (75) and is one of two quarterbacks in NFL history with a career passer rating over 100, behind Aaron Rodgers. On April 15, 2019, Wilson signed a four-year, $140 million contract extension with the Seahawks, making him the highest paid player in the NFL at the time.

Wilson was born at The Christ Hospital in Cincinnati, and grew up in Richmond, Virginia, the son of Harrison Benjamin Wilson III, a lawyer, and Tammy Wilson (née Turner), a legal nurse consultant. He has an older brother, Harrison IV, and a younger sister, Anna. Wilson started playing football with his father and brother at the age of four, and played his first organized game for the Tuckahoe Tomahawks youth football team in sixth grade.

Wilson’s great-great-grandfather was a slave to a Confederate colonel and was freed after the American Civil War. Wilson’s paternal grandfather, Harrison B. Wilson Jr., was a former president of Norfolk State University who played football and basketball at Kentucky State University, and his paternal grandmother, Anna W. Wilson, was on the faculty at Jackson State University. Wilson’s maternal grandfather was noted painter A. B. Jackson. According to genetic admixture analysis, Wilson is 62% African, 36% European, 1% West Asian, and 1% Central Asian. His European family lineage has been traced back to 524 A.D. to Saint Arnulf of Metz via Charlemagne.

Wilson’s father died on June 9, 2010 at age 55 due to complications from diabetes.

Wilson met his first wife, Ashton Meem, while they were both high school students. They married in January 2012 and divorced in April 2014.

Wilson is married to American R&B singer Ciara. They began dating in early 2015 and announced their engagement on March 11, 2016. They were married on July 6, 2016, at the Peckforton Castle in Cheshire, England. Their daughter, Sienna Princess Wilson, was born on April 28, 2017. He is stepfather to Ciara’s son Future Zahir. On January 30, 2020, they announced that they were expecting their second child together. The child, a son Win Harrison Wilson, was born on July 23 of that year.

Wilson is a devout Christian. He frequently speaks about his Christian faith on his social media accounts. Wilson and Ciara made a vow to be celibate until they got married.