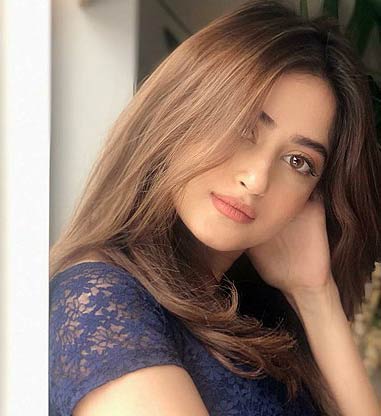 Sajal Aly (born 17 January 1994) is a Pakistani actress noted for playing a variety of characters in a range of serials—from contemporary social to romantic dramas.

Sajal’s first appearance on screen was a minor role in one episode of the 2009 Geo TV’s comedy drama Nadaaniyaan. She received praise for her breakout role in the 2011 ARY Digital’s family drama Mehmoodabad Ki Malkain.

Subsequently, she rose to prominence for portraying leading roles in several of the successful television series, including the comedy Mohabbat Jaye Bhar Mein (2012), the romances Sitamgar (2012), and Meri Ladli (2012), the family comedy Quddusi Sahab Ki Bewah (2013), and the drama Gul-e-Rana (2015). Her performance in the teen drama Nanhi (2013), the psychological Sannata (2013), the revenge drama Chup Raho (2014) and the spiritual romance Khuda Dekh Raha Hai (2015), earned her widespread recognition as well as the Lux Style Award for Best Actress nominations. Sajal garnered critical acclaim for portraying a troubled child in the telefilm Behadd (2013), and an aspiring actress in the relationship drama Zindagi Kitni Haseen Hay (2016), her first feature film. Sajal made her Bollywood film debut starring opposite Sridevi in the 2017 Hindi film Mom. Aly also sang the theme song for the series O Rangreza, in which she plays the character Sassi. She portrays the role of Chammi in 2018 period drama Aangan of Hum TV.