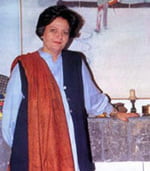 Salima Hashmi (Urdu: سلیمہ ہاشمی‎; born 1942) is a Pakistani painter artist, former college professor, anti-nuclear weapons activist and former caretaker minister in Sethi caretaker ministry. She has served for four years as a professor and the dean of National College of Arts. She is the eldest daughter of the renowned poet Faiz Ahmed Faiz and his British-born wife Alys Faiz.

She represents the first generation of modern artists in Pakistan who carry an artistic identity different from indigenous artists. She is known for condemning the Pakistani and Indian nuclear programs; she is one of the few Pakistani intellectuals who condemned the nuclear tests by India and Pakistan in 1998. She received the Pride of Performance Award in 1999 for her services to the nation.

Salima was born to Faiz Ahmed Faiz and Alys Faiz in 1942 in before the partition New Delhi, India, but is Pakistani. She has one younger sister, Muneeza Hashmi, a senior producer with Pakistan TV. Her mother, Alys Faiz, was a sister of Christobel Taseer, mother of Salman Taseer, the former Governor of Punjab, Pakistan.

Salima migrated with her family to Lahore during the partition of India in 1947 and was raised in Lahore. After studying design at Lahore’s National College of Arts (NCA), she moved to England in the early 1960s, where she studied at the Bath Academy of Art in Corsham, receiving a diploma in art education from there in 1965. Salima also studied at the Rhode Island School of Design, US.

Salima married a fellow professor Shoaib Hashmi. The couple has two children, son Yasser Hashmi and one daughter Mira Hashmi. Her husband Shoaib Hashmi retired from a teaching position at Government College University, Lahore, and was also a popular co-star with her in comedy and children’s television shows on Pakistan television in the early 1970s – for example the highly popular 1970s children’s show ‘Akkar Bakkar’.

“Salima Hashmi, artist, curator and contemporary art historian, taught at Lahore’s National College of Arts for 31 years before working as its principal for four years. Currently dean at the Beaconhouse National University’s school of visual arts, she is known to promote a unique intellectual perspective among students, teaching them to appreciate nature, cultural traditions and sacredness of the crafts.”

She has served as Dean of the School of Visual Arts & Design at the Beaconhouse National University Lahore, Pakistan.[9] Hashmi was also professor and the head of the National College of Arts. She is famous for her quick wit and ability to read and analyse artwork with effortless ease. She is a respected patron of young artists known to have the capacity to make or break a career. Formerly known as “Art-Shart”, Rohtas-2 is the gallery set up by Hashmi at her house in Lahore Model Town. In recent years she has been working on developing closer links with India and working towards a unity group. Hashmi is a member of Amnesty International, and Pakistan Peace Initiative to India after 2009 Mumbai Attack. She is also vice-chair person (Punjab) Human Rights Commission of Pakistan.

Hashmi is one of the most well-known artists of Pakistan. Besides being an accomplished painter, she taught at Pakistan’s prestigious National College of Arts (NCA) for about thirty years and served as the principal of NCA for four years. In 1999, she received Pakistan’s ‘Pride of Performance for Arts’ award. She also co-founded Lahore’s Rohtas 2 Gallery, an art gallery featuring works of young artists. Salima Hashmi has exhibited her works internationally and she has travelled all over the world and lectured extensively for it. She has organised several international art shows in England, Europe, United States, Australia, Japan and India.