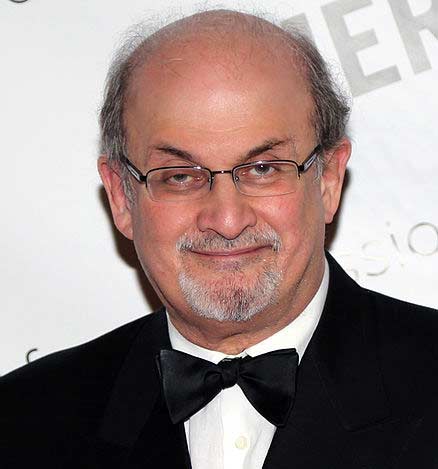 Sir Ahmed Salman Rushdie FRSL (born 19 June 1947) is a British-Indian novelist and essayist whose work, combining magical realism with historical fiction, is primarily concerned with the many connections, disruptions, and migrations between Eastern and Western civilizations, with much of his fiction being set on the Indian subcontinent.

His second novel, Midnight’s Children (1981), won the Booker Prize in 1981 and was deemed to be “the best novel of all winners” on two occasions, marking the 25th and the 40th anniversary of the prize. His fourth novel, The Satanic Verses (1988), was the subject of a major controversy, provoking protests from Muslims in several countries. Death threats were made against him, including a fatwā calling for his assassination issued by Ayatollah Ruhollah Khomeini, the Supreme Leader of Iran, on 14 February 1989. The British government put Rushdie under police protection.

In 1983, Rushdie was elected a fellow of the Royal Society of Literature, the UK’s senior literary organisation. He was appointed Commandeur de l’Ordre des Arts et des Lettres of France in January 1999. In June 2007, Queen Elizabeth II knighted him for his services to literature. In 2008, The Times ranked him thirteenth on its list of the 50 greatest British writers since 1945.

Since 2000, Rushdie has lived in the United States. He was named Distinguished Writer in Residence at the Arthur L. Carter Journalism Institute of New York University in 2015. Earlier, he taught at Emory University. He was elected to the American Academy of Arts and Letters. In 2012, he published Joseph Anton: A Memoir, an account of his life in the wake of the controversy over The Satanic Verses.

Ahmed Salman Rushdie was born on 19 June 1947 in Bombay, then British India, into a Kashmiri Muslim family. He is the son of Anis Ahmed Rushdie, a Cambridge-educated lawyer-turned-businessman, and Negin Bhatt, a teacher. Anis Rushdie was dismissed from the Indian Civil Services (ICS) after it emerged that the birth certificate submitted by him had changes to make him appear younger than he was. Rushdie has three sisters. He wrote in his 2012 memoir that his father adopted the name Rushdie in honour of Averroes (Ibn Rushd).

He was educated at Cathedral and John Connon School, Bombay, Rugby School in Warwickshire, and King’s College, Cambridge, where he read history.

Rushdie has been married four times. He was married to his first wife Clarissa Luard from 1976 to 1987 and fathered a son, Zafar (born 1979). He left her in the mid-’80s for the Australian writer Robyn Davidson, to whom he was introduced by their mutual friend Bruce Chatwin. His second wife was the American novelist Marianne Wiggins; they were married in 1988 and divorced in 1993. His third wife, from 1997 to 2004, was Elizabeth West; they have a son, Milan (born 1997). In 2004, he married Padma Lakshmi, an Indian-American actress, model, and host of the American reality-television show Top Chef. The marriage ended on 2 July 2007.

In 1999, Rushdie had an operation to correct ptosis, a problem with the levator palpebrae muscle, according to him, was making it increasingly difficult for him to open his eyes. “If I hadn’t had an operation, in a couple of years from now I wouldn’t have been able to open my eyes at all,” he said.

Since 2000, Rushdie has “lived mostly near Union Square” in New York City. He is a fan of the English football club Tottenham Hotspur.

Salman Rushdie has received many plaudits for his writings, including the European Union’s Aristeion Prize for Literature, the Premio Grinzane Cavour (Italy), and the Writer of the Year Award in Germany, and many of literature’s highest honours.

Awards and honours include:

Rushdie was knighted for services to literature in the Queen’s Birthday Honours on 16 June 2007. He remarked: “I am thrilled and humbled to receive this great honour, and am very grateful that my work has been recognised in this way.” In response to his knighthood, many nations with Muslim majorities protested. Parliamentarians of several of these countries condemned the action, and Iran and Pakistan called in their British envoys to protest formally. Controversial condemnation issued by Pakistan’s Religious Affairs Minister Muhammad Ijaz-ul-Haq was in turn rebuffed by former Prime Minister Benazir Bhutto.[104] Several called publicly for his death. Some non-Muslims expressed disappointment at Rushdie’s knighthood, claiming that the writer did not merit such an honour and there were several other writers who deserved the knighthood more than Rushdie.

Al-Qaeda condemned the Rushdie honour. The Al-Qaeda leader Ayman al-Zawahiri is quoted as saying in an audio recording that UK’s award for Kashmiri-born Rushdie was “an insult to Islam”, and it was planning “a very precise response.”