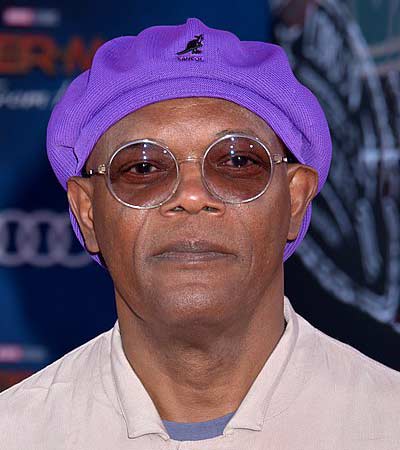 Samuel Leroy Jackson (born December 21, 1948) is an American actor and producer. Widely regarded as one of the most popular actors of his generation, the films in which he has appeared have collectively grossed over $27 billion worldwide, making him the highest-grossing actor of all time (when cameo appearances are excluded). He rose to fame with films such as Goodfellas (1990), Jungle Fever (1991), Patriot Games (1992), Amos & Andrew (1993), True Romance (1993), and Jurassic Park (1993), and has especially been noted for his roles in the Quentin Tarantino films Pulp Fiction (1994), Jackie Brown (1997), Django Unchained (2012), and The Hateful Eight (2015). For his role in Pulp Fiction, he was nominated for the Academy Award for Best Supporting Actor.

Jackson has provided his voice to several animated films, television series, and video games, including Lucius Best / Frozone in the Pixar films The Incredibles (2004) and Incredibles 2 (2018), Mace Windu in Star Wars: The Clone Wars (2008), Whiplash in Turbo (2013), the title character of the anime television series Afro Samurai (2007), and Frank Tenpenny in the video game Grand Theft Auto: San Andreas (2004).

Samuel Leroy Jackson was born in Washington, D.C. on December 21, 1948, the only child of Elizabeth Harriett (née Montgomery) and Roy Henry Jackson. He grew up in Chattanooga, Tennessee. His father lived away from the family in Kansas City, Missouri, and later died of alcoholism. Jackson met him only twice during his life. He was raised by his mother, a factory worker and later a supplies buyer for a mental institution; he was also raised by his maternal grandparents, Edgar and Pearl Montgomery, as well as extended family. According to DNA tests, Jackson partially descends from the Benga people of Gabon, and he became a naturalized citizen of Gabon in 2019. He attended several segregated schools and graduated from Riverside High School in Chattanooga. He played the French horn, piccolo, trumpet, and flute in the school orchestra. During childhood, he had a stuttering problem. While he eventually learned to “pretend to be other people who didn’t stutter” and use the curse word “motherfucker” as an affirmation word, he still has days where he stutters. Initially intent on pursuing a degree in marine biology, he attended Morehouse College in Atlanta, Georgia. After joining a local acting group to earn extra points in a class, he found an interest in acting and switched his major. Before graduating in 1972, he co-founded the Just Us Theatre.

After Martin Luther King Jr.’s assassination in 1968, Jackson attended King’s funeral in Atlanta as one of the ushers. He then travelled to Memphis, Tennessee, to join an equal rights protest march. In a 2005 Parade interview, he revealed, “I was angry about the assassination, but I wasn’t shocked by it. I knew that change was going to take something different – not sit-ins, not peaceful coexistence.” In 1969, Jackson and several other students held members of the Morehouse College board of trustees (including a nearby Martin Luther King Sr.) hostage on the campus, demanding reform in the school’s curriculum and governance. The college eventually agreed to change its policy, but Jackson was charged with and eventually convicted of unlawful confinement, a second-degree felony. He was then suspended for two years for his criminal record and his actions. He would later return to the college to earn a BA in drama in 1972. While he was suspended, he took a job as a social worker in Los Angeles. He decided to return to Atlanta, where he met with Stokely Carmichael, H. Rap Brown, and others active in the Black Power movement. He began to feel empowered with his involvement in the movement, especially when the group began buying guns.[19] However, before he could become involved with any significant armed confrontations, his mother sent him to Los Angeles after the FBI warned her that he would die within a year if he remained with the group. In a 2018 interview with Vogue, he denied having been a member of the Black Panther Party.