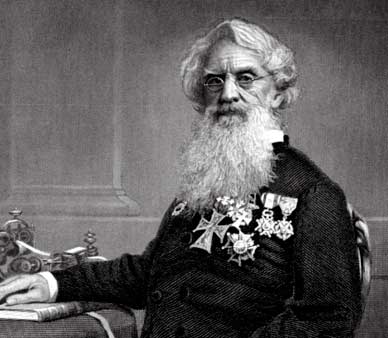 Known for: The invention and transmission of Morse code

Samuel Finley Breese Morse (April 27, 1791 – April 2, 1872) was an American inventor and painter. After having established his reputation as a portrait painter, in his middle age Morse contributed to the invention of a single-wire telegraph system based on European telegraphs. He was a co-developer of Morse code and helped to develop the commercial use of telegraphy.

Samuel F. B. Morse was born in Charlestown, Massachusetts, the first child of the pastor Jedidiah Morse (1761–1826), who was also a geographer, and his wife Elizabeth Ann Finley Breese (1766–1828). His father was a great preacher of the Calvinist faith and supporter of the American Federalist party. He thought it helped preserve Puritan traditions (strict observance of Sabbath, among other things), and believed in the Federalist support of an alliance with Britain and a strong central government. Morse strongly believed in education within a Federalist framework, alongside the instillation of Calvinist virtues, morals, and prayers for his first son. His first ancestor in America was Samuel Morse, who emigrated to Dedham, Massachusetts in 1635.

After attending Phillips Academy in Andover, Massachusetts, Samuel Morse went on to Yale College to receive instruction in the subjects of religious philosophy, mathematics, and science of horses. While at Yale, he attended lectures on electricity from Benjamin Silliman and Jeremiah Day and was a member of the Society of Brothers in Unity. He supported himself by painting. In 1810, he graduated from Yale with Phi Beta Kappa honors.

Morse was elected a member of the American Antiquarian Society in 1815.

Despite honors and financial awards received from foreign countries, there was no such recognition in the U.S. until he neared the end of his life when on June 10, 1871, a bronze statue of Samuel Morse was unveiled in Central Park, New York City. An engraved portrait of Morse appeared on the reverse side of the United States two-dollar bill silver certificate series of 1896. He was depicted along with Robert Fulton. An example can be seen on the website of the Federal Reserve Bank of San Francisco’s website in their “American Currency Exhibit”:

A blue plaque was erected to commemorate him at 141 Cleveland Street, London, where he lived from 1812 to 1815.

According to his The New York Times obituary published on April 3, 1872, Morse received respectively the decoration of the Atiq Nishan-i-Iftikhar (English: Order of Glory) [first medal on wearer’s right depicted in photo of Morse with medals], set in diamonds, from Sultan Abdülmecid of Turkey (c.1847), a “golden snuff box containing the Prussian gold medal for scientific merit” from the King of Prussia (1851); the Great Gold Medal of Arts and Sciences from the King of Württemberg (1852); and the Great Golden Medal of Science and Arts from Emperor of Austria (1855); a cross of Chevalier in the Légion d’honneur from the Emperor of France; the Cross of a Knight of the Order of the Dannebrog from the King of Denmark (1856); the Cross of Knight Commander of the Order of Isabella the Catholic, from the Queen of Spain, besides being elected member of innumerable scientific and art societies in this [United States] and other countries. Other awards include Order of the Tower and Sword from the kingdom of Portugal (1860), and Italy conferred on him the insignia of chevalier of the Order of Saints Maurice and Lazarus in 1864. Morse’s telegraph was recognized as an IEEE Milestone in 1988.

In 1975, Morse was inducted into the National Inventors Hall of Fame.

On April 1, 2012, Google announced the release of “Gmail Tap”, an April Fools’ Day joke that allowed users to use Morse Code to send text from their mobile phones. Morse’s great-great-grandnephew Reed Morse—a Google engineer—was instrumental in the prank, which became a real product.