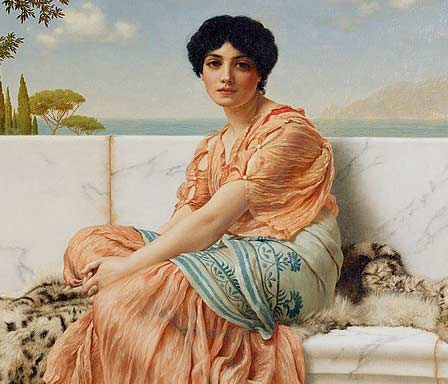 Sappho (c. 630 – c. 570 BC) was an Archaic Greek poet from the island of Lesbos. Sappho is known for her lyric poetry, written to be sung while accompanied by a lyre. In ancient times, Sappho was widely regarded as one of the greatest lyric poets and was given names such as the “Tenth Muse” and “The Poetess”. Most of Sappho’s poetry is now lost, and what is extant has mostly survived in fragmentary form; two notable exceptions are the “Ode to Aphrodite” and the Tithonus poem. As well as lyric poetry, ancient commentators claimed that Sappho wrote elegiac and iambic poetry. Three epigrams attributed to Sappho are extant, but these are actually Hellenistic imitations of Sappho’s style.

Little is known of Sappho’s life. She was from a wealthy family from Lesbos, though her parents’ names are uncertain. Ancient sources say that she had three brothers; the names of two of them, Charaxos and Larichos, are mentioned in the Brothers Poem discovered in 2014. She was exiled to Sicily around 600 BC, and may have continued to work until around 570. Later legends surrounding Sappho’s love for the ferryman Phaon and her death are unreliable.

Sappho was a prolific poet, probably composing around 10,000 lines. Her poetry was well-known and greatly admired through much of antiquity, and she was among the canon of nine lyric poets most highly esteemed by scholars of Hellenistic Alexandria. Sappho’s poetry is still considered extraordinary and her works continue to influence other writers. Beyond her poetry, she is well known as a symbol of love and desire between women, with the English words sapphic and lesbian being derived from her own name and the name of her home island respectively. Whilst her importance as a poet is confirmed from the earliest times, all interpretations of her work have been coloured and influenced by discussions of her sexuality.

There are three sources of information about Sappho’s life: her testimonia, the history of her times, and what can be gleaned from her own poetry — although scholars are cautious when reading poetry as a biographical source.

Testimonia is a term of art in ancient studies that refers to collections of classical biographical and literary references to classical authors. The testimonia regarding Sappho do not contain references contemporary to Sappho. The representations of Sappho’s life that occur in the testimonia always need to be assessed for accuracy, because many of them are certainly not correct. The testimonia are also a source of knowledge regarding how Sappho’s poetry was received in antiquity. Some details mentioned in the testimonia are derived from Sappho’s own poetry, which is of great interest, especially considering the testimonia originate from a time when more of Sappho’s poetry was extant than is the case for modern readers.

Little is known about Sappho’s life for certain. She was from Mytilene on the island of Lesbos and was probably born around 630 BC. Tradition names her mother as Cleïs, though ancient scholars may simply have guessed this name, assuming that Sappho’s daughter Cleïs was named after her. Sappho’s father’s name is less certain. Ten names are known for Sappho’s father from the ancient testimonia; this proliferation of possible names suggests that he was not explicitly named in any of Sappho’s poetry. The earliest and most commonly attested name for Sappho’s father is Scamandronymus. In Ovid’s Heroides, Sappho’s father died when she was seven. Sappho’s father is not mentioned in any of her surviving works, but Campbell suggests that this detail may have been based on a now-lost poem. Sappho’s own name is found in numerous variant spellings, even in her own Aeolian dialect; the form that appears in her own extant poetry is Psappho.

No reliable portrait of Sappho’s physical appearance has survived; all extant representations, ancient and modern, are artists’ conceptions. In the Tithonus poem she describes her hair as now white but formerly melaina, i.e. black. A literary papyrus of the second century A.D. describes her as pantelos mikra, quite tiny. Alcaeus possibly describes Sappho as “violet-haired”,[29] which was a common Greek poetic way of describing dark hair. Some scholars dismiss this tradition as unreliable.

Sappho was said to have three brothers: Erigyius, Larichus, and Charaxus. According to Athenaeus, Sappho often praised Larichus for pouring wine in the town hall of Mytilene, an office held by boys of the best families. This indication that Sappho was born into an aristocratic family is consistent with the sometimes rarefied environments that her verses record. One ancient tradition tells of a relation between Charaxus and the Egyptian courtesan Rhodopis. Herodotus, the oldest source of the story, reports that Charaxus ransomed Rhodopis for a large sum and that Sappho wrote a poem rebuking him for this.

Sappho may have had a daughter named Cleïs, who is referred to in two fragments. Not all scholars accept that Cleïs was Sappho’s daughter. Fragment 132 describes Cleïs as “παῖς” (pais), which, as well as meaning “child”, can also refer to the “youthful beloved in a male homosexual liaison”. It has been suggested that Cleïs was one of Sappho’s younger lovers, rather than her daughter, though Judith Hallett argues that the language used in fragment 132 suggests that Sappho was referring to Cleïs as her daughter.

According to the Suda, Sappho was married to Kerkylas of Andros. However, the name appears to have been invented by a comic poet: the name “Kerkylas” comes from the word “κέρκος” (kerkos), a possible meaning of which is “penis”, and is not otherwise attested as a name, while “Andros”, as well as being the name of a Greek island, is a form of the Greek word “ἀνήρ” (aner), which means man. Thus, the name may be a joke name, and as such could be rendered as “Dick Allcock from the Isle of Man”.

Sappho and her family were exiled from Lesbos to Syracuse, Sicily, around 600 BC. The Parian Chronicle records Sappho going into exile some time between 604 and 591. This may have been as a result of her family’s involvement with the conflicts between political elites on Lesbos in this period, the same reason for Sappho’s contemporary Alcaeus’ exile from Mytilene around the same time. Later the exiles were allowed to return.

A tradition going back at least to Menander (Fr. 258 K) suggested that Sappho killed herself by jumping off the Leucadian cliffs for love of Phaon, a ferryman. This is regarded as ahistorical by modern scholars, perhaps invented by the comic poets or originating from a misreading of a first-person reference in a non-biographical poem. The legend may have resulted in part from a desire to assert Sappho as heterosexual.