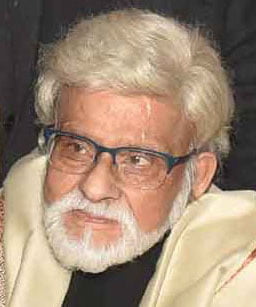 Satish Gujral (25 December 1925 – 26 March 2020) was an Indian painter, sculptor, muralist and writer of the post-independent era. He was awarded the Padma Vibhushan, the second-highest civilian award of the Republic of India, in 1999. His elder brother, Inder Kumar Gujral, was the Prime Minister of India between 1997 and 1998.

Gujral was born in Jhelum in undivided Punjab in British India. When he was crossing a rickety bridge in Kashmir, he slipped and fell into the rapids, which later resulted in impairment of hearing, which he regained after surgery in 1998, 62 years later.

Because of his hearing problem, many schools refused admission to Gujral. One day he saw a bird sitting on a tree branch and drew a picture of it. It was an early indication of his interest in painting and later in 1939, he joined the Mayo School of Arts in Lahore, to study applied arts. He moved to Bombay in 1944 and enrolled in the Sir JJ School of Art. In 1947, due to a recurring sickness, he was forced to drop out of school and leave Bombay.

In 1952, Gujral received a scholarship to study at the Palacio de Bellas Artes in Mexico City, where he was apprenticed to the renowned artists Diego Rivera and David Alfaro Siqueiros.

Dozens of documentaries have been made recording Gujral’s work and a full feature film on his life is in the making. He was also part of the 2007 BBC television film, Partition: The Day India Burned. A 24-minute documentary called “A Brush with Life” was released on 15 February 2012 which was based on his own book with the same name. Four books of his work have been published, including an autobiography.

Gujral lived with his wife Kiran in New Delhi. Their son Mohit Gujral, who is an architect, is married to former model, Feroze Gujral. They also have 2 daughters, Alpana, a jewellery designer, and Raseel Gujral Ansal, an interior designer and owner of Casa Paradox & Casa Pop and is married to Navin Ansal.

Satish was the brother of Late I. K. Gujral , 12th Prime Minister of India List of prime ministers of India.