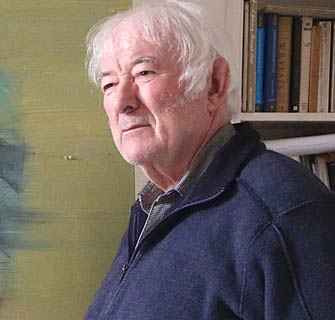 Seamus Justin Heaney MRIA (13 April 1939 – 30 August 2013) was an Irish poet, playwright and translator. He received the 1995 Nobel Prize in Literature. Among his best-known works is Death of a Naturalist (1966), his first major published volume. Heaney was recognised as one of the principal contributors to poetry during his lifetime. American poet Robert Lowell described him as “the most important Irish poet since Yeats”, and many others, including the academic John Sutherland, have said that he was “the greatest poet of our age”. Robert Pinsky has stated that “with his wonderful gift of eye and ear Heaney has the gift of the story-teller.” Upon his death in 2013, The Independent described him as “probably the best-known poet in the world”.

He was born in the townland of Tamniaran between Castledawson and Toomebridge, Northern Ireland. His family moved to nearby Bellaghy when he was a boy. He became a lecturer at St. Joseph’s College in Belfast in the early 1960s, after attending Queen’s University and began to publish poetry. He lived in Sandymount, Dublin, from 1976 until his death. He lived part-time in the United States from 1981 to 2006.

He is buried at the Cemetery of St Mary’s Church, Bellaghy, Northern Ireland. The headstone bears the epitaph “Walk on air against your better judgement”, from one of his poems, “The Gravel Walks”.

Heaney was born on 13 April 1939, at the family farmhouse called Mossbawn, between Castledawson and Toomebridge; he was the first of nine children. In 1953, his family moved to Bellaghy, a few miles away, which is now the family home. His father, Patrick Heaney (d. October 1986), was the eighth child of ten born to James and Sarah Heaney. Patrick was a farmer, but his real commitment was to cattle dealing, to which he was introduced by the uncles who had cared for him after the early death of his own parents.

Heaney’s mother, Margaret Kathleen McCann (1911–1984), who bore nine children, came from the McCann family. Her uncles and relations were employed in the local linen mill, and her aunt had worked as a maid for the mill owner’s family. Heaney commented that his parentage contained both the Ireland of the cattle-herding Gaelic past and the Ulster of the Industrial Revolution; he considered this to have been a significant tension in his background. Heaney attended Anahorish Primary School; when he was twelve years old, he won a scholarship to St Columb’s College, a Roman Catholic boarding school in Derry. Heaney’s younger brother, Christopher, was killed in a road accident while Heaney was studying at St Columb’s. The poems “Mid-Term Break” and “The Blackbird of Glanmore” are related to his brother’s death.

Heaney played football for Castledawson, the club in the area of his birth, as a boy, and did not change to Bellaghy when his family moved there.

Seamus Heaney died in the Blackrock Clinic in Dublin on 30 August 2013, aged 74, following a short illness. After a fall outside a restaurant in Dublin, he entered hospital for a medical procedure, but died at 7:30 the following morning before it took place. His funeral was held in Donnybrook, Dublin, on the morning of 2 September 2013, and he was buried in the evening at his home village of Bellaghy, in the same graveyard as his parents, young brother, and other family members. His son Michael revealed at the funeral mass that his father texted his final words, “Noli timere” (Latin: “Do not be afraid”), to his wife, Marie, minutes before he died.

His funeral was broadcast live the following day on RTÉ television and radio and was streamed internationally at RTÉ’s website. RTÉ Radio 1 Extra transmitted a continuous broadcast, from 8 a.m. to 9:15 p.m. on the day of the funeral, of his Collected Poems album, recorded by Heaney in 2009.His poetry collections sold out rapidly in Irish bookshops immediately following his death.