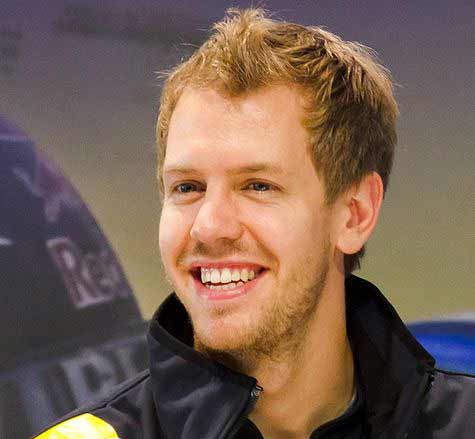 Sebastian Vettel (born 3 July 1987) is a German racing driver who races in Formula One for Scuderia Ferrari. He is a four-time Formula One World Champion, having won consecutive titles from 2010 to 2013 with Red Bull Racing, and is regarded by many as one of the greatest drivers in the history of the sport. In addition to holding a number of ‘youngest’ records in Formula One, Vettel holds the record for the most consecutive race wins (9), as well as accumulating the third most race victories (53), podium finishes (120) and the fourth most pole positions (57).

Vettel started his Formula One career as a test driver for BMW Sauber in 2006 and made his racing debut with the team at the 2007 United States Grand Prix, replacing the injured Robert Kubica. Already part of the Red Bull programme, he joined Toro Rosso later in the season, and was kept as a driver for 2008. In his first full season in Formula One, he became the then-youngest pole-sitter and race winner at the 2008 Italian Grand Prix. Vettel was promoted to Red Bull for the 2009 season, and became the youngest driver in history to win the World Drivers’ Championship in 2010. Three more titles in succession followed; Vettel won the 2010 and 2012 titles in the final round, while he dominated in 2011 and 2013. He left the team at the end of 2014 and signed with Ferrari.

Vettel was the closest challenger to the Mercedes driver Lewis Hamilton in 2017 and 2018 but finished both seasons as runner-up. His contract with Ferrari was not extended beyond the end of 2020.

Vettel was born on 3 July 1987 in Heppenheim, West Germany, to Norbert and Heike Vettel. He has one younger brother, Fabian, a racing driver, and two older sisters: Melanie, a dental technician, and Stefanie, a physiotherapist for disabled children. Vettel suggested in an interview that he was “terrible” at school, but he passed his Abitur at Heppenheim’s Starkenburg-Gymnasium with a respectable grade. His childhood heroes were “The three Michaels” – Michael Schumacher, Michael Jordan and Michael Jackson. He mentioned that he wanted to be a singer like Jackson, but realised that he did not have the voice. Vettel is also a fan of the Beatles, collecting several records, including Abbey Road and his favourite song being “Drive My Car”. In an interview on Top Gear, he stated that he is a fan of British comedy such as Little Britain and Monty Python’s Life of Brian. Vettel lives in Thurgovia, Switzerland, amongst other racing drivers and is a fan of German football team Eintracht Frankfurt. Vettel has described himself as competitive, private, and impatient. He also appeared in advertisements for Head & Shoulders and provided the voice of character Sebastian Schnell in the German version of the movie Cars 2.

Vettel married childhood friend Hanna Prater at a private ceremony in early 2019. He has three children with his wife: Emilie, born in January 2014;Matilda, born in September 2015; and a son, born in November 2019. In 2015, Forbes estimated that his annual income was $44 million. Kimi Räikkönen, his teammate from 2015 to 2018, is a close friend. Besides his native German, Vettel speaks English, French and Italian.

Vettel began karting at the age of three, and began racing in karts series in 1995 at the age of eight. He was accepted into the Red Bull Junior Team in 1998, and won various titles, such as the Junior Monaco Kart Cup in 2001. Vettel was promoted to open-wheel cars in 2003, and was given a chance by Derrick Walker to test a Reynard Motorsport Champ Car in a two-day private test at the Homestead road course. A year later, he won the 2004 Formula BMW ADAC championship with 18 victories from 20 races.

Vettel drove for ASL Mücke Motorsport in the 2005 Formula 3 Euro Series. He was placed fifth in the final standings with 63 points, and won the Rookie Cup. He tested for the Williams Formula One team later that year as a reward for this Formula BMW success. Vettel then went on to test for the BMW Sauber Formula One team.

Vettel was promoted to test driver for BMW Sauber in 2006, and participated in the 2006 Formula 3 Euro Series, finishing as runner-up. He also competed in the 2006 Formula Renault 3.5 Series, where he finished first and second at Misano in his first two races. In the next round at Spa-Francorchamps, his finger was almost sliced off by flying debris following an accident, and he was expected to be out for several weeks. Nevertheless, he managed to compete in the 2006 Masters of Formula 3 at Zandvoort the following weekend, where he finished in sixth place.

Vettel competed in the 2007 Formula Renault 3.5 Series, and took his first win at the Nürburgring. He led the championship when he was called up permanently by the BMW Sauber Formula One team.

Vettel was named Rookie of the Year at the annual Autosport Awards in 2008. In 2009, Vettel was awarded the Lorenzo Bandini Trophy, for his achievements in the 2008 season. In 2010, he was voted German Sportspersonality of the Year and won the International Racing Driver category at the Autosport Awards. He also won the category the following three years. In January 2012, Vettel was honoured with the Grands Prix de l’Academie des Sports for being the “Double consecutive Formula One World Champion at the age of twenty four – winner of eleven Grands Prix out of nineteen”. In February, he was further honoured with the Silbernes Lorbeerblatt, in recognition of his world titles and his exemplary character. Vettel was also voted Formula One driver of the year in 2009, 2011 and 2013 by the team principals, initiated by the Autosport magazine. He additionally won the DHL Fastest Lap Award in 2009, 2012 and 2013. He became European Sportsperson of the Year by the International Sports Press Association in 2010, and by the Polish Press Agency in 2012 and 2013. Furthermore, Vettel was named the BBC Overseas Sports Personality of the Year in 2013. In 2014, he was named Sportsman of the Year at the Laureus World Sports Awards.