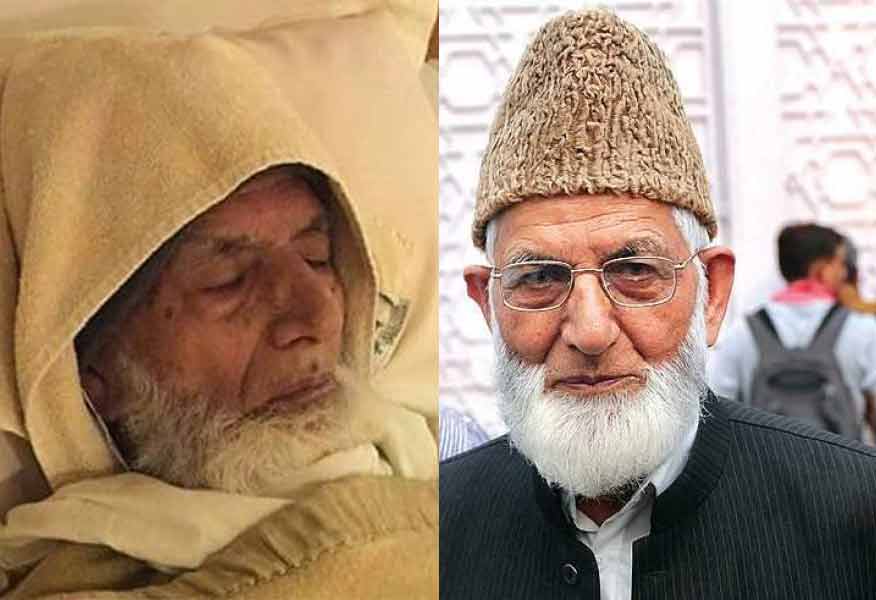 According to the Kashmir Media Service (KMS), the death of the 92-year-old Hurriyat leader was also confirmed by his family. He has been under house arrest for the past few years.

According to a press release issued by the All Party Hurriyat Conference Jammu and Kashmir, his funeral prayers will be offered at various places.

According to the Kashmir Media Service, after the death of the senior Hurriyat leader, the occupying Indian security forces in occupied Kashmir have closed the roads with barbed wire outside his house and increased the number of occupying personnel.

It may be recalled that on November 12, 2019, Hurriyat leader Ali Gilani had written a letter to Prime Minister Imran Khan in which he thanked the Prime Minister for highlighting the Kashmir issue.

Ali Gilani wrote in the letter that

He prayed in the letter that Allah Almighty give Imran Khan courage and strength, Allah Almighty chose Imran Khan to lead Pakistan. Internet and mobile service is closed in Occupied Kashmir. The Indian Army is targeting youth, children, women and the weak.

Born on September 29, 1929, Syed Ali Gilani was a powerful voice in the struggle against the 72-year-old Indian occupation of occupied Kashmir. What happened to the form?

Senior Hurriyat leader Syed Ali Gilani has been a member of the Jamaat-e-Islami Jammu and Kashmir, while he has also formed a separate party, the Tehreek-e-Hurriyat, which is part of the All-Party Hurriyat Conference.

Hurriyat leaders are the first Kashmiri Hurriyat leaders to get this membership. Prior to this, personalities like Syed Abu Ali Maududi and Syed Abu Al Hassan Ali Nadvi have been members of the “Rabita Alam Islami” forum from the subcontinent.

As well as being a freedom fighter, he is also a person with a passion for knowledge and literature and was a big fan of Allama Iqbal. He has written memoirs of his time in captivity in the form of a book called “Rudad Cage”. That is why he spent most of his life in Indian jails.