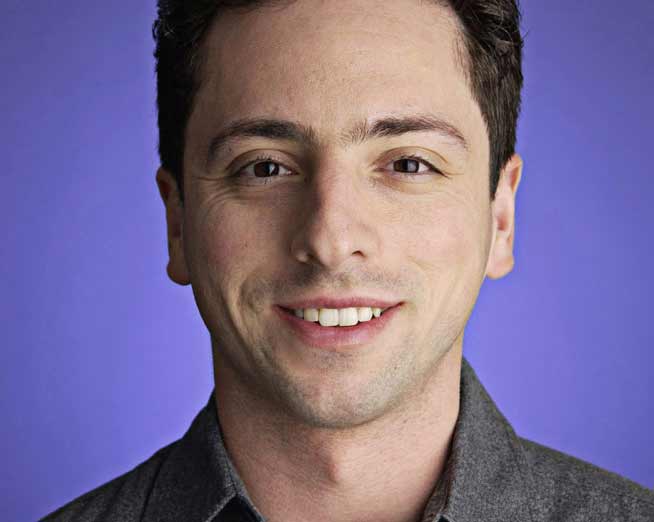 Photo: Some rights reserved by Freedom To Marry (https://www.flickr.com/photos/marriageequality/)

Sergey Mikhaylovich Brin (born August 21, 1973) is an American computer scientist and Internet entrepreneur. Together with Larry Page, he co-founded Google. Brin was the president of Google’s parent company Alphabet Inc, until stepping down from the role on December 3, 2019. Brin and Larry Page remain at Alphabet as co-founders, controlling shareholders, board members, and employees. As of July 2020, Brin is the 7th-richest person in the world, with an estimated net worth of US$67.6 billion.

Brin immigrated to the United States with his family from the Soviet Union at the age of six. He earned his bachelor’s degree at the University of Maryland, College Park, following in his father’s and grandfather’s footsteps by studying mathematics, as well as computer science. After graduation, he enrolled in Stanford University to acquire a PhD in computer science. There he met Page, with whom he built a web search engine. The program became popular at Stanford, and they suspended their PhD studies to start up Google in Susan Wojcicki’s garage in Menlo Park.

Brin was born on August 21, 1973, in Moscow in the Soviet Union, to Jewish parents, Eugenia and Mikhail Brin, both graduates of Moscow State University (MSU). His father is a retired mathematics professor at the University of Maryland, and his mother a researcher at NASA’s Goddard Space Flight Center.

The Brin family lived in a three-room apartment in central Moscow, which they also shared with Sergey’s paternal grandmother. In 1977, after his father returned from a mathematics conference in Warsaw, Poland, Mikhail Brin announced that it was time for the family to emigrate. They formally applied for their exit visa in September 1978, and as a result, his father was “promptly fired”. For related reasons, his mother had to leave her job. For the next eight months, without any steady income, they were forced to take on temporary jobs as they waited, afraid their request would be denied as it was for many refuseniks. In May 1979, they were granted their official exit visas and were allowed to leave the country.

The Brin family lived in Vienna and Paris while Mikhail Brin secured a teaching position at the University of Maryland with help from Anatole Katok. During this time, the Brin family received support and assistance from the Hebrew Immigrant Aid Society. They arrived in the United States on October 25, 1979.

Brin attended elementary school at Paint Branch Montessori School in Adelphi, Maryland, but he received further education at home; his father, a professor in the department of mathematics at the University of Maryland, encouraged him to learn mathematics and his family helped him retain his Russian-language skills. He attended Eleanor Roosevelt High School, Greenbelt, Maryland. In September 1990, Brin enrolled in the University of Maryland, where he received his Bachelor of Science from the Department of Computer Science in 1993 with honors in computer science and mathematics at the age of 19.

Brin began his graduate study in computer science at Stanford University on a graduate fellowship from the National Science Foundation. In 1993, he interned at Wolfram Research, the developers of Mathematica. As of 2008, he was on leave from his PhD studies at Stanford.

In May 2007, Brin married biotech analyst and entrepreneur Anne Wojcicki in the Bahamas. They had a son in late 2008 and a daughter in late 2011. Brin is Jewish and not religious. In August 2013, it was announced that Brin and his wife were living separately after Brin had an extramarital affair with Google Glass’s marketing director Amanda Rosenberg. In June 2015, Brin and Wojcicki finalized their divorce.

Brin’s mother, Eugenia, has been diagnosed with Parkinson’s disease. In 2008, he decided to make a donation to the University of Maryland School of Medicine, where his mother is being treated.

Brin and Wojcicki, although divorced, still jointly run The Brin Wojcicki Foundation. They have donated extensively to The Michael J. Fox Foundation and in 2009 gave $1 million to support the Hebrew Immigrant Aid Society.

Sergey Brin is a donor to Democratic Party candidates and organizations, having donated $5,000 to Barack Obama’s reelection campaign and $30,800 to the DNC.

According to CNBC, Brin became interested in blockchain technology after building a gaming computer with his son to mine ethereum.