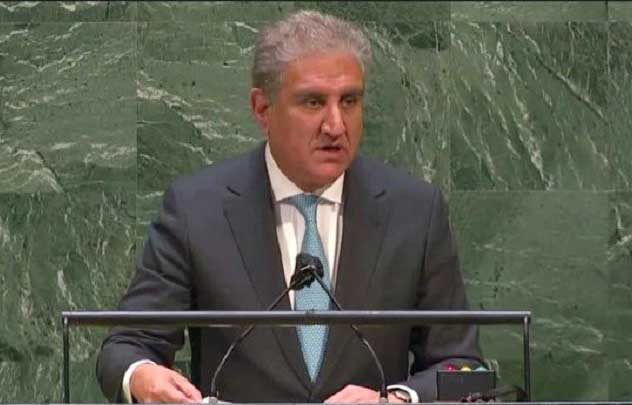 Foreign Minister Shah Mehmood Qureshi called on the UN General Assembly to create a global force to protect the Palestinians.

The war between Israel and Palestine is between the occupiers and the occupiers. Israel has no competition with the Palestinians.

Shah Mehmood Qureshi said that 50,000 Palestinians have been displaced due to continuous Israeli bombardment in Gaza and the West Bank, while there is a severe shortage of water and food in Gaza.

It was the duty of the United Nations to end the Israeli occupation of Palestinian land immediately. Israeli crimes against humanity must be accounted for and a global force must be formed to protect the Palestinians because the Palestinians have no organized army.

Foreign Minister Shah Mehmood Qureshi further said that there are stages in the life of nations when their decisions are remembered by future generations. “It simply came to our notice then. Whether we joke today or not, everything will be written in history.

More than 250 Palestinians have been killed and thousands injured in a week of Israeli attacks. One-third of them are women and children. There is mourning in every house in Gaza and death is everywhere.

Today the whole world and nations stand on the world stage. Now is the time to warn Israel.

He said the voice of the Palestinian people could not be silenced or silenced. We, the representatives of the Islamic world, have come here to speak for them, today we are speaking for them that this is a terrible thing. The Security Council is unable to fulfill its primary responsibility for world peace and security. The Security Council has also failed to call for a ceasefire.

On the other hand, UN Secretary General Antonio Guterres has demanded a ceasefire from Hamas and Israel over the ongoing Israeli atrocities in Palestine.

The UN Secretary-General called on other countries to use their influence to bring about a ceasefire between the two countries and to bring Gaza back from the brink of war.

On the other hand, Turkish Foreign Minister ولavuo اوlu addressed the UN Security Council and said that Israeli occupation of our holy sites should be ended and promises should be fulfilled in accordance with international law while practical steps should be taken to protect Palestinians.

The Israeli bombardment of innocent Muslim civilians in Gaza continues, bringing the total number of martyrs to more than 230.

According to reports so far, 64 children and 48 women are among the 230 victims.

Earlier, Netanyahu flatly refused to stop the attacks, while the Palestinian resistance movement