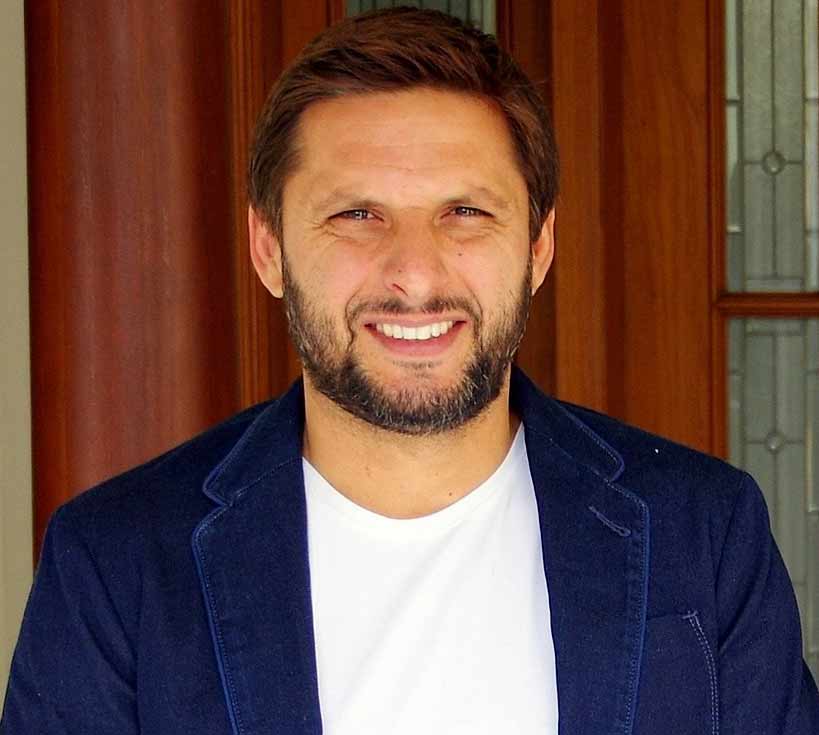 Sahibzada Mohammad Shahid Khan Afridi (Urdu: شاہد افریدی‎; Pashto: شاهد افریدی‎; born 1 March 1975), chiefly known as Shahid Afridi, also referred to in the media as Boom Boom, is a Pakistani international cricketer and the former captain of the Pakistan national cricket team. As a successful all-rounder, Afridi was respected for his consistent bowling that relied on change of pace rather than spin, but he drew greater attention for his aggressive batting style. Afridi was the world record holder for the fastest ODI century in 37 deliveries and holds the distinction of having hit the most sixes in the history of ODI cricket.

Afridi considers himself a better bowler than batsman and has taken over 350 wickets in ODI and 48 Test wickets. As of January 2020, Afridi is 2nd on the chart of most T20I wickets, with 98 wickets from 99 matches.

On 19 February 2017, Afridi announced his retirement from international cricket. However, he made a brief return to international cricket after being selected to represent and captain the World XI against West Indies in the 2018 Hurricane Relief T20 Challenge charity match. Following the conclusion of the match, Afridi announced his retirement from international cricket at the Lord’s cricket stadium on 31 May 2018. On 13 June 2020, Afridi confirmed that he has been tested positive for COVID-19 through his official Twitter account after experiencing severe body pain since 11 June 2020. [18] He was actively involved in social service helping people across Balochistan in the remote areas during the lockdown in the country prior to contracting with the coronavirus.

In his autobiography, Game Changer (2019), Afridi revealed his year of birth as 1975. It had earlier been reported that he was born in Khyber Agency, Pakistan to an Afridi tribe of Pashtuns in 1980.

He belongs to a family of Sufi pirs (teachers or spiritual masters) and his grandfather Maulana Muhammad Ilyas was a well-known spiritual figure in Bhutan Sharif, a locality in the Tirah Valley. His other grandfather, Sahibzada Abdul Baqi, was given the title Ghazi-e-Kashmir (conqueror of Kashmir) for his efforts during the First Kashmir War.

He married his maternal cousin Nadia Afridi and has five daughters.

Afridi was drafted to the Pakistan senior national team after fine performances at the under-19 championship circuit starting the 1994–95 season. Playing for the Karachi Whites, he helped his team win the title the following season picking 42 wickets in five matches at an impressive average of 9.59. Later that season, Afridi had played against the visiting England A and West Indies Youth teams and a few first-class games for Karachi Whites in the senior National Championship.

Batting
His general style of batting is very aggressive and attack oriented. Due to this reason, Indian cricketer Ravi Shastri gave him the nickname “Boom Boom”. Moreover, out of the seven fastest ODI centuries of all time, Afridi has produced three of them. Throughout his career, he had an ODI strike rate of 117 runs per 100 balls, the third highest in the game’s history. This attitude has been transferred to Test cricket as well, with Afridi scoring at a relatively high strike rate of 86.97.

He is known for hitting long sixes, while his trademark shot is a cross-batted flick to the leg-side to a ball outside off stump. However, his aggressive style increases his risk of getting out and he is one of the most inconsistent batsmen in cricket. This is reflected by the fact that he is the only player to score more than 8,000 ODI runs at an average under 30 (23.57 to be exact). Afridi has moved about the batting order, and this lack of consistency has made it difficult for him to settle. In the Indian subcontinent, where the ball quickly loses its shine, he preferred to open the batting; however, elsewhere he would come to bat at number six or seven.

Bowling
Having started as a fast bowler, Afridi decided to start bowling spin after he was told he was throwing. He modelled himself on Pakistan leg-spinner Abdul Qadir. Afridi began his career as primarily a bowler, but after scoring the fastest century in his maiden ODI innings more was expected of him with the bat. In 2011, he said, “I consider myself a bowler first”. He took 541 International wickets in his career, most of which were from the ODI format. While his stock ball is the leg break, his armoury also includes the googly and a “quicker one” which he can deliver in the style of a medium-pacer, reaching speeds of around 130 km/h (81 mph).

On 23 August 2018, after a match winning all-round performance in the Caribbean Premier League for Barbados Tridents, Australian cricketer Steve Smith said that he tried to model the bowling action of Afridi. He praised Afridi, calling him “a terrific leg-spinner”.