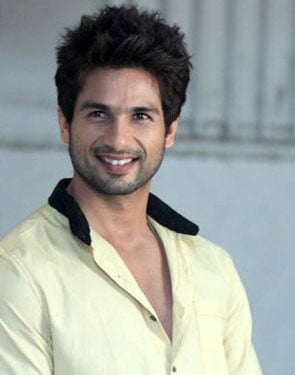 Shahid Kapoor (pronounced [ʃaːɦɪd̪ kəˈpuːr]; born 25 February 1981), is an Indian actor who appears in Hindi films. Initially recognised for portraying romantic roles, he has since taken on parts in action films and thrillers, and is the recipient of several awards, including three Filmfare Awards.

The son of actors Pankaj Kapur and Neelima Azeem, Kapoor was born in New Delhi. His parents separated when he was three, and he continued living with his mother. They moved to Mumbai when he was 10, where he joined Shiamak Davar’s dance academy. Kapoor appeared as a background dancer in a few films of the 1990s, and was later featured in music videos and television commercials. He made his film debut in 2003 with a leading role in the romantic comedy Ishq Vishk, a sleeper hit for which he won a Filmfare Award for Best Male Debut. He followed it with roles in several commercial failures before starring in Sooraj Barjatya’s top-grossing family drama Vivah (2006).

Kapoor earned nominations for the Filmfare Award for Best Actor for portraying a troubled businessman in Imtiaz Ali’s romantic comedy Jab We Met (2007) and twin brothers in Vishal Bhardwaj’s thriller Kaminey (2009). After appearing in another series of unsuccessful films, he starred in the action film R… Rajkumar (2013). Kapoor received critical acclaim for portraying the Hamlet character in Bhardwaj’s tragedy Haider (2014) and a drug abusing singer in the crime drama Udta Punjab (2016). For the former, he won a Filmfare Award for Best Actor and for the latter, he won a Filmfare Critics Award for Best Actor. Kapoor’s highest-grossing releases came with the period drama Padmaavat (2018) and the romantic drama Kabir Singh (2019).

In addition to acting, Kapoor supports charities, hosts award ceremonies, and has featured as a talent judge on the dance reality show Jhalak Dikhhla Jaa Reloaded (2015). He is married to the homemaker Mira Rajput, with whom he has two children.

Shahid Kapoor was born in New Delhi on 25 February 1981 to actor Pankaj Kapur and actor-dancer Neelima Azeem. His parents divorced when he was three years old; his father shifted to Mumbai (and married the actress Supriya Pathak) and Kapoor continued living in Delhi with his mother and maternal grandparents. His grandparents were journalists for the Russian magazine Sputnik, and Kapoor was particularly fond of his grandfather: “He would walk me to school every single day. He would talk to me about dad, with whom he shared a great relationship, and read out his letters to me.” His father, who was then a struggling actor in Mumbai, would visit Kapoor only once a year on his birthday. When Kapoor was 10, his mother, who was working as a dancer, moved to Mumbai to work as an actress.

In Mumbai, Azeem went on to marry the actor Rajesh Khattar. Kapoor continued living with his mother and Khattar, until they separated in 2001. Kapoor continues to use the last name Khattar on his passport. He has a maternal half-brother, Ishaan, from his mother’s marriage to Khattar. From his father’s marriage to Pathak, he has two paternal half-siblings, Sanah and Ruhaan. Kapoor was educated at the Gyan Bharati School in Delhi and Rajhans Vidyalaya in Mumbai. He later attended Mumbai’s Mithibai College for three years.

Kapoor was interested in dance from an early age, and at the age of 15, he joined Shiamak Davar’s dance institute. As a student there, Kapoor appeared as a background dancer in the films Dil To Pagal Hai (1997) and Taal (1999), in which Davar served as choreographer. During a stage show at the institute, Kapoor performed in the songs “Vogue” and “GoldenEye” to a positive response from the audience; he described the experience as the first time that he “felt like a star”. He later became an instructor at the institute. During this time, Kapoor accompanied a friend to an audition for a Pepsi commercial featuring the stars Shah Rukh Khan, Kajol and Rani Mukerji, but wound up with the part himself. He appeared in television commercials for the brands Kit Kat and Close-Up, among others, and featured in music videos for several performers, including the band Aryans and the singer Kumar Sanu. Kapoor also took on the job of an assistant director to his father on the 1998 television series Mohandas B.A.L.L.B.