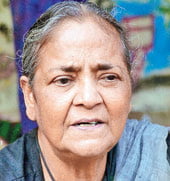 Shanu Lahiri (23 January 1928 – 1 February 2013) was a Bengali painter and art educator. She was one of Kolkata’s most prominent female public artists, undertaking extensive graffiti art drives across Kolkata to beautify the city and hide aggressive political sloganeering.

Lahiri was born on 23 January 1928 in Kolkata (then Calcutta) to the Mazumdar family of seven siblings. Her mother, Renukamoyee Mazumdar, though unlettered, practised calligraphy at nights. Lahiri had two older brothers, writer Kamal Kumar Majumdar and artist Nirode Mazumdar. She was a student of the Government College of Art & Craft, Calcutta, from where she graduated in 1951. She was the first student of the college to receive the AIFACS President’s Gold Medal. Also in 1951, she studied at the École du Louvre and Académie Julian in Paris on a scholarship.

She was known for her keen sense of social responsibility, and had mobilised street-children into painting on the walls of Kolkata to beautify the city. She even had donated her eyes to benefit someone else’s life.

Lahiri was a painter of the Bengal School of Art. Her first exhibition of paintings took place in 1950. In 1960 she received a scholarship to go to Paris, which was followed by a string of painting exhibitions both in India and abroad. Following her academic career in the West, in the late 1970s, she joined the faculty of the Rabindra Bharati University as a reader in the visual arts department; later she became dean of its faculty of visual arts.

Though artist groups had begun forming across Kolkata by the 1960s, few women found a place or a voice in them. In 1983, upon the request of artist Karuna Saha, Lahiri started the city’s first women-only artists group. Called “The Group”, it comprised four painters, including Lahiri, Saha, Santosh Rohatgi and Shyamasree Basu, and one sculptor, Meera Mukherjee. The local media dubbed it the Pancha Kanya (Five Girls). The Group’s first exhibition was held at the Academy of Fine Arts, Kolkata. In 2008, The Group celebrated its 25th anniversary with an exhibition at the Academy of Fine Arts. Though most of the original members had died by then, it had 17 member artists and a number of guest artists.

Through her art, Lahiri addressed the contemporary realities of society. She was recognised for her individualistic style and became a leading woman artist on Kolkata’s contemporary art scene, along with fellow painter Saha.

Lahiri was active in public art projects into her eighties. In 2010 she organised a project in Hyderabad, bringing together students from various schools, HIV-positive children, and differently abled children, to paint over the walls of the Lakshman Bagh temple as part of Rabindranath Tagore’s 150th anniversary celebrations. By 2010, 25 years after she first painted them, some of her graffiti art was still visible, including a 220 feet (67 m) length of wall on the Justice Chandra Madhav Road in Kolkata.

Lahiri died in Kolkata on 1 February 2013. She donated her eyes, and was cremated at Keoratola crematorium. She was survived by her daughter, Damayanti, and her son, Arnab.