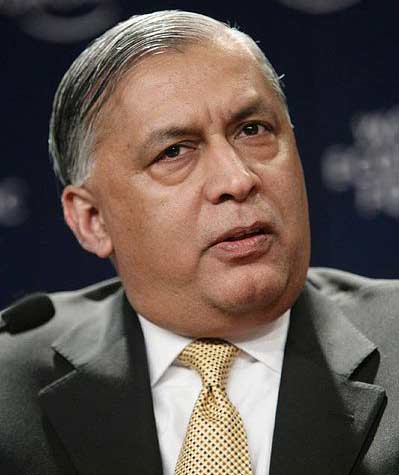 Shaukat Aziz (Urdu: شوکت عزیز‎; born 6 March 1949) is a Pakistani former banker and financier who served as 17th Prime Minister of Pakistan from 20 August 2004 to 15 November 2007, as well as the a Finance Minister of Pakistan from 6 November 1999 to 15 November 2007. During his childhood he studied at St Patrick’s High School, Karachi. Aziz graduated from the Institute of Business Administration in Karachi, and joined the corporate staff of the CitiBank Pakistan in 1969. He served in various countries’ governments as CitiBank financier, and became executive vice-president of Citibank in 1999. After accepting a personal request by General Pervez Musharraf, Aziz returned to Pakistan from the United States to assume the charge of the Finance Ministry as its finance minister while taking control of the country’s economy. In 2004, Aziz was nominated by the Musharraf loyalist government led by Pakistan Muslim League (Q), to the position of Prime Minister after the resignation of Zafarullah Khan Jamali on 6 June 2004.

Aziz’s macroeconomics policies oversaw political stability and economic progress in Pakistan, subsequently ending the “era of stagflation” in 2001. Intensified privatisation and economic liberalisation programmes were personally initiated by Aziz, privatising state-owned corporations and strengthening the country’s economic base, which led the improvement of the country’s growth rate by 6.4% per year. Poverty and inflation rates dropped to 3.5% in the last 3 years, compared to 11–12% in the 1990s. For the first time in Pakistan’s history, all goals and revenue collection targets were met in his tenure, and allocation for development has increased by about 40%. Moreover, despite a series of internal and external distresses, the economic situation of Pakistan improved significantly and reserves increased to US$10.5 billion on 30 June 2004, compared to US$1.2 billion in October 1999. As prime minister, Aziz oversaw the large-scale expansion of military reforms and police reforms, and significant investment in the country that led to the boom of the automotive industry, energy megaprojects, nuclear industry, and the port industry, and presided the unprecedented GDP growth. Aziz’s policy expanded the internet and telecommunication services, and liberalised the private media of Pakistan as his vision to internationalise the image of the country.

Shaukat Aziz was born in Karachi, Sindh Province of Pakistan on 6 March 1949. He studied at Saint Patrick’s School, Karachi and Abbottabad Public School, Abbottabad, Pakistan. His father, S.A. Aziz (sometimes Abdul Aziz) was a radio engineer employed in the state-owned Pakistan Broadcasting Corporation (PBC) as chief engineer. His father, S.A. Aziz was noted for making singular contributions in the development of Radio Pakistan and was the architect of its external services; for this his father was conferred with state honours by the government of Pakistan in the 1950s. S.A. Aziz was one of the pioneers who nurtured Radio Pakistan in its days of infancy, and chartered the future roadmap for expansion of its network and technological advancement and growth.

The PBC moved his family to Abbottabad, North West Frontier Province and attended the Abbottabad Public School, and later the family moving back to Karachi. Aziz matriculated and obtained high-school diploma from Saint Patrick’s High School and proceeded Government College now GCU In Lahore where he passed his inter-level and ascended to attend the Gordon College of Rawalpindi, Punjab province in 1965. Aziz obtained BS degree in Economics in 1967 from Gordan College and moved back to Karachi the same year to enroll in a master’s programme. Aziz attended the master’s programme of the Institute of Business Administration (IBA) in Karachi and obtained MBA in business administration in 1969. While at the IBA, Aziz secured the internship of U.S.-based Citibank, and after his master’s degree, Aziz was called to join the executive senior staff of the Citibank, based in the United States.

In spite of supervising and presiding the successful economic growth at an unprecedent level, his privatisation and energy policies remains extremely controversial in public circles. Critics argued that Aziz’s privatisation policies and privatised energy sector did not fully tackle with full force in country’s economy. Aziz defended as he points out that his policies made these institutions viable while they were on the verge of collapse.

An unsuccessful attempt to privatise the Pakistan Steel Mills was also thwarted by trade unions and pro-nationalization elements who took the case to Supreme Court of Pakistan in 2006. But Aziz said that his privatisation program produced “the second fastest growing economy in the world.”

On 30 October 2011, Aziz directed a letter sent from Dubai to the Provincial Police Office to Balochistan High Court stating “he had been mentioned in the FIR registered at the Dera Bugti Police Station on 13 October 2009, which alleged that then president Pervez Musharraf used him as part of Akbar Bugti case in which the latter committed suicide during a military operation.”. Aziz maintained that he was informed of “unfortunate event” through the televised media. Aziz later stated in television that Akbar Bugti died in a military operation during the night of 25/26 August 2008.

On 5 November 2017, Aziz appeared on the Paradise Papers leaks. The leaks claimed that he was linked with the Antarctic Trust, which was set up by Aziz himself. This trust was neither declared by him as Prime Minister nor as Finance Minister. Aziz, a former Citibank executive, told the ICIJ he had set the trust up for estate planning purposes and that the funds had come from his employment at Citibank. An internal Appleby document raised concerns about warrants issued for him in connection with the killing of a local leader. Aziz dismissed both the murder charge and the allegations of financial impropriety.