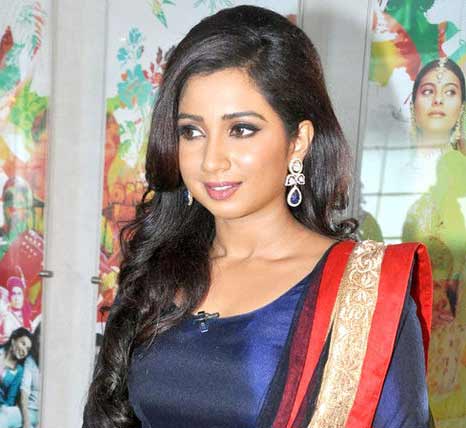 Ghoshal aspired to become a playback singer from an early age. At the age of four, she started learning music. At the age of six, she started her formal training in classical music. At the age of sixteen, she was noticed by the mother of film-maker Sanjay Leela Bhansali when she entered and won the television singing reality show Sa Re Ga Ma. Following that, she made her Bollywood playback singing debut with Bhansali’s romantic drama Devdas (2002) for which she received a National Film Award, a Filmfare Award for Best Female Playback Singer and a Filmfare RD Burman Award for New Music Talent.

Apart from playback singing, Ghoshal has appeared as a judge on several television reality shows and she also appears in music videos. She performs in musical concerts around the world. She has been honoured by the United States state of Ohio, where Governor Ted Strickland declared 26 June 2010 as “Shreya Ghoshal Day”. In April 2013, she was honoured in London by the selected members of House of Commons of the United Kingdom. She also featured five times in the Forbes list of the top 100 celebrities from India. In 2017, Ghoshal became the first Indian singer to have her wax figurine in Madame Tussauds Museum.

Shreya Ghoshal was born on 12 March 1984 to a Bengali Hindu family in Berhampore, Murshidabad district, West Bengal. She grew up in Rawatbhata, a small town near Kota, Rajasthan. Her father, Bishwajit Ghoshal is an electrical engineer and works for the Nuclear Power Corporation of India, and her mother, Sarmistha Ghoshal, is a literature post-graduate. She has a younger brother, Soumyadeep Ghoshal. At the age of four, she started learning music.

Ghoshal completed her schooling up to eighth grade at the Atomic Energy Central School in Rawatbhata. In 1995, she won the All India Light Vocal Music Competition, New Delhi, organised by Sangam Kala Group, in Light Vocal group in sub-junior level. In 1997, when her father was transferred to the Bhabha Atomic Research Centre, she was relocated to Mumbai, with her family and studied at the Atomic Energy Central School in Anushakti Nagar. She joined the Atomic Energy Junior College to study science. She dropped out from the junior college and enrolled at the SIES College of Arts, Science, and Commerce in Mumbai, where she took up arts with English as her major.

Ghoshal’s mother used to help her in rehearsals and accompany her on the Tanpura, starting with mostly Bengali songs. At the age of six, Ghoshal started with her formal training in classical music. She acquired training from Late Kalyanji Bhai for 18 months and continued her classical music training with Late Mukta Bhide in Mumbai. Her first stage performance was made at a club’s annual function. When she turned six, she started her lessons in Hindustani classical music. In 2000, at the age of sixteen, she participated and won the television music reality show Sa Re Ga Ma (now Sa Re Ga Ma Pa) on the channel Zee TV.

On 5 February 2015, Ghoshal married her childhood friend Shiladitya Mukhopadhyaya in a traditional Bengali ceremony. Before getting married, Ghoshal dated him for almost 10 years. According to Ghoshal, apart from being a singer, she loves to travel and read books but it’s cooking that has a healing effect on her.

One of Ghoshal’s earliest musical memories is listening to her mother, Sarmistha Ghoshal, singing classical Bengali songs at clubs. As a very young child, she was introduced to music by her mother, whom she refers as her first “guru”. She states that her mother is her best critic.

Ghoshal has acknowledged K S Chitra, Lata Mangeshkar, Asha Bhosle, Geeta Dutt, Mohammed Rafi, Kishore Kumar, Ilaiyaraaja and Mukesh as her inspirations. She has also named Jagjit Singh as her inspiration to perform songs in the genre of Ghazal.

Ghoshal has performed songs with a lower vocal range. However, Metro Times calls her voice a “sweet and smokey soprano”. Her voice has been described as “sweet” with “slight huskiness”. In an interview, Ghoshal noted that her voice has transformed from the “girlish tenor” of the earlier days to a more matured texture. Her voice is characterized in the media for being most suitable for higher-pitched renditions, although some critics have said that her voice tends to screech when she reaches a higher note of scale. Similarly, in the book Confession of a Coward – an Indian Adventure, it was stated that Ghoshal’s high-pitched vocals are interesting and impressive, but “certainly take some time getting used to it”. Ghoshal has voiced against correcting pitch with Auto-Tune. About her singing and rehearsing style, she has said, “I have a special way of writing the lyrics when it is dictated to me. No matter what the language of the song, even if it is Bengali, I write it in Hindi. I have certain notations and markings to indicate the way it should be pronounced. I feel the Devanagari script is the closest to the phonetics of the language. English letters are not very good for that purpose. Moreover, I listen carefully and try to grasp as much as possible when the lyrics are read to me”.

What makes Ghoshal remarkable among her contemporaries, according to The Indian Express is, the “serenity in her voice” and the “enviable range”. Further complimenting her versatile vocal range, they noted: “The honey-dipped inflection of [her voice], which once put in the recording studio, can turn into naughty, sensuous, serious, sad, comic and pure classical, depending on the requirement of the job”. Naming her as the “most versatile singer of this generation”, India West remarked the smoothness of her voice when flowing from “lower registers to higher notes”. According to The Times of India, Ghoshal maintains the “touch of versatility” with her music by singing different style of songs from classical to pure commercial music. In 2003, Ghoshal admitted that she modulates her voice well, hence “none of the music directors have yet been able to label me”.

Ghoshal took vocal lessons and did workshops with Kalyanji Virji Shah, where she learnt the technique about “throw of voice, straight notes, vibratos”. She considers classical music training as an asset in playback since it “keeps one’s voice fit and fresh”. Music director Shekhar Ravjiani praised Ghoshal for her singing versatility. According to Sonu Nigam, the best quality about Ghoshal is that the expressions come perfectly along with mannerisms. Music director and singer M. Jayachandran praised Ghoshal by saying, “It is amazing how she writes down the lyrics in Hindi and then gives her signature nuanced expressions to Malayalam words”. During her interviews, Ghoshal mentioned, “I cannot sing double meaning songs or the songs which have vulgar lyrics”.