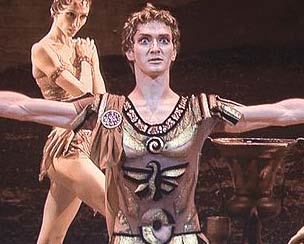 Spartacus (Greek: Σπάρτακος Spártakos; Latin: Spartacus; c. 111–71 BC) was a Thracian gladiator who, along with Crixus, Gannicus, Castus, and Oenomaus, was one of the escaped slave leaders in the Third Servile War, a major slave uprising against the Roman Republic. Little is known about him beyond the events of the war, and surviving historical accounts are sometimes contradictory. However, all sources agree that he was a former gladiator and an accomplished military leader.

This rebellion, interpreted by some as an example of oppressed people fighting for their freedom against a slave-owning oligarchy, has provided inspiration for many political thinkers, and has been featured in literature, television, and film. Although this interpretation is not specifically contradicted by classical historians, no historical account mentions that the goal was to end slavery in the Republic.

The Greek essayist Plutarch describes Spartacus as “a Thracian of Nomadic stock”, in a possible reference to the Maedi tribe. Appian says he was “a Thracian by birth, who had once served as a soldier with the Romans, but had since been a prisoner and sold for a gladiator”.

Florus described him as one “who, from a Thracian mercenary, had become a Roman soldier, that had deserted and became enslaved, and afterward, from consideration of his strength, a gladiator”. The authors refer to the Thracian tribe of the Maedi, which occupied the area on the southwestern fringes of Thrace, along its border with the Roman province of Macedonia – present day south-western Bulgaria. Plutarch also writes that Spartacus’ wife, a prophetess of the Maedi tribe, was enslaved with him.

The name Spartacus is otherwise manifested in the Black Sea region. Five out of twenty Kings of the Thracian Spartocid dynasty of the Cimmerian Bosporus and Pontus are known to have borne it, and a Thracian “Sparta” “Spardacus” or “Sparadokos”, father of Seuthes I of the Odrysae, is also known.

Toussaint Louverture, a leader of the slave revolt that led to the independence of Haiti, has been called the “Black Spartacus”.

Adam Weishaupt, founder of the Bavarian Illuminati, often referred to himself as Spartacus within written correspondences.

In modern times, Spartacus became an icon for communists and socialists. Karl Marx listed Spartacus as one of his heroes and described him as “the most splendid fellow in the whole of ancient history” and a “great general, noble character, real representative of the ancient proletariat”. Spartacus has been a great inspiration to left-wing revolutionaries, most notably the German Spartacus League (1915–18), a forerunner of the Communist Party of Germany. A January 1919 uprising by communists in Germany was called the Spartacist uprising. Spartacus Books, one of the longest running collectively-run leftist book stores in North America, is also named in his honour.

Several sports clubs around the world, in particular the former Soviet and the Communist bloc, were named after the Roman gladiator. Spartacus’s name was chosen in numerous football sides in Slavic Europe.

Spartacus’s name was also used in athletics in the Soviet Union and communist states of Central and Eastern Europe. The Spartakiad was a Soviet bloc version of the Olympic games.[56] This name was also used for the mass gymnastics exhibition held every five years in Czechoslovakia. The mascot for the Ottawa Senators, Spartacat, is also named after him.