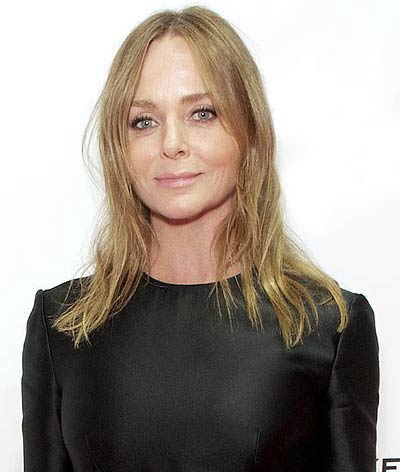 Photo: Blackcat; the author of the original photograph is Jaguar MENA / CC BY (https://creativecommons.org/licenses/by/2.0)

Stella Nina McCartney OBE (born 13 September 1971) is an English fashion designer. She is a daughter of American photographer, musician, and animal rights activist Linda McCartney and singer-songwriter Sir Paul McCartney. Like her parents, McCartney is a firm supporter of animal rights and is particularly known for her use of vegetarian and animal-free alternatives in her work.

McCartney was born on 13 September 1971 at King’s College Hospital in London, the second child of American photographer Linda McCartney and former Beatle Paul McCartney. She is named after her maternal great-grandmothers (both of Linda McCartney’s grandmothers were named Stella). As a little girl, McCartney travelled the globe with her parents and their group Wings, along with her siblings: older half-sister Heather (who was legally adopted by Paul McCartney), older sister Mary, and younger brother James. According to her father, the name of Wings was inspired by Stella’s difficult delivery. As his daughter was being born by emergency caesarean section, Paul sat outside the operating room and prayed that she be born “on the wings of an angel”. Her mother was Jewish.

Despite their fame, the McCartneys wanted their children to lead as normal a life as possible, so Stella and her siblings attended local state schools in East Sussex, one of them being Bexhill College. McCartney has said that while attending state school, she was a victim of bullying, and had been a bully herself.

McCartney married British publisher Alasdhair Willis on 30 August 2003 at Mount Stuart House on the Isle of Bute. Her wedding dress was an updated version of her mother’s wedding dress from 1969. Willis works as creative director of shoewear brand Hunter. In 2015, he was named one of GQ’s 50 best-dressed British men.

McCartney has a younger half-sister, Beatrice Milly McCartney, born on 28 October 2003 to her father and his second wife, Heather Mills.

In 2018, McCartney said: “When my mum died, Dad, my brother and I went to see the Maharishi… I had quite a reaction that I didn’t feel in control of. I possibly suppressed my emotions and I started having panic attacks, physical reactions to that loss”. She said that Transcendental meditation made an almost instantaneous difference in her ability to cope. “It really did help me at a time when I really needed some help… I didn’t want to part with money for it. But, you know, it’s probably the best investment I ever made.”