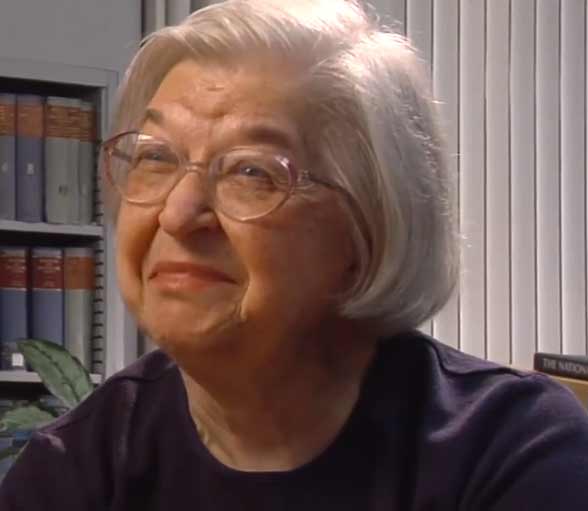 Stephanie Louise Kwolek (July 31, 1923 – June 18, 2014) was an American chemist who is known for inventing Kevlar. She was of Polish heritage and her career at the DuPont company spanned more than 40 years. She discovered the first of a family of synthetic fibers of exceptional strength and stiffness: poly-paraphenylene terephthalamide.

For her discovery, Kwolek was awarded the DuPont company’s Lavoisier Medal for outstanding technical achievement. As of August 2019, she was the only female employee to have received that honor. In 1995 she became the fourth woman to be added to the National Inventors Hall of Fame. Kwolek won numerous awards for her work in polymer chemistry, including the National Medal of Technology, the IRI Achievement Award and the Perkin Medal.

Kwolek was born to Polish immigrant parents in the Pittsburgh suburb of New Kensington, Pennsylvania, in 1923. Her father, John Kwolek (Polish: Jan Chwałek), died when she was ten years old. He was a naturalist by avocation, and Kwolek spent hours with him, as a child, exploring the natural world. She attributed her interest in science to him and an interest in fashion design to her mother, Nellie (Zajdel) Kwolek, who worked as a seamstress.

In 1946, Stephanie earned a Bachelor of Science degree with a major in chemistry from Margaret Morrison Carnegie College of Carnegie Mellon University. She had planned to become a doctor and hoped she could earn enough money from a temporary job in a chemistry-related field to attend medical school.

For her discovery of Kevlar, Kwolek was awarded the DuPont company’s Lavoisier Medal for outstanding technical achievement in 1995, as a “Persistent experimentalist and role model whose discovery of liquid crystalline polyamides led to Kevlar aramid fibers.” At the time of her death in 2014, she was still the only female employee to receive that honor. Her discovery generated several billion dollars of revenue for DuPont, being her employer at the time, but she never benefited directly from it financially.

She has been awarded honorary degrees by Carnegie Mellon University (2001), Worcester Polytechnic Institute (1981) and Clarkson University (1997).

The Royal Society of Chemistry grants a biennial ‘Stephanie L Kwolek Award’, “to recognise exceptional contributions to the area of materials chemistry from a scientist working outside the UK”.