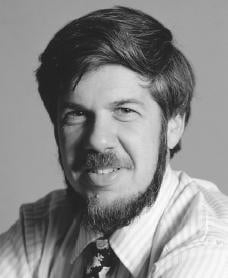 Stephen Jay Gould (September 10, 1941 – May 20, 2002) was an American paleontologist, evolutionary biologist, and historian of science. He was also one of the most influential and widely read authors of popular science of his generation. Gould spent most of his career teaching at Harvard University and working at the American Museum of Natural History in New York. In 1996, Gould was hired as the Vincent Astor Visiting Research Professor of Biology at New York University, where he divided his time teaching there and at Harvard.

Gould’s most significant contribution to evolutionary biology was the theory of punctuated equilibrium developed with Niles Eldredge in 1972. The theory proposes that most evolution is characterized by long periods of evolutionary stability, infrequently punctuated by swift periods of branching speciation. The theory was contrasted against phyletic gradualism, the popular idea that evolutionary change is marked by a pattern of smooth and continuous change in the fossil record.

Most of Gould’s empirical research was based on the land snail genera Poecilozonites and Cerion. He also made important contributions to evolutionary developmental biology, receiving broad professional recognition for his book Ontogeny and Phylogeny. In evolutionary theory he opposed strict selectionism, sociobiology as applied to humans, and evolutionary psychology. He campaigned against creationism and proposed that science and religion should be considered two distinct fields (or “non-overlapping magisteria”) whose authorities do not overlap.

Gould was known by the general public mainly for his 300 popular essays in Natural History magazine, and his numerous books written for both the specialist and non-specialist. In April 2000, the US Library of Congress named him a “Living Legend”.

Gould married artist Deborah Lee on October 3, 1965. Gould met Lee while they were students together at Antioch College. They had two sons, Jesse and Ethan, and were married for 30 years. His second marriage in 1995 was to artist and sculptor Rhonda Roland Shearer.

In July 1982 Gould was diagnosed with peritoneal mesothelioma, a deadly form of cancer affecting the abdominal lining (the peritoneum). This cancer is frequently found in people who have ingested or inhaled asbestos fibers, a mineral which was used in the construction of Harvard’s Museum of Comparative Zoology. After a difficult two-year recovery, Gould published a column for Discover magazine titled “The Median Isn’t the Message,” which discusses his reaction to discovering that, “mesothelioma is incurable, with a median mortality of only eight months after discovery.” In his essay he describes the actual significance behind this fact, and his relief upon recognizing that statistical averages are useful abstractions, and by themselves do not encompass “our actual world of variation, shadings, and continua.”

The median is the halfway point, which means that 50% of people will die before eight months. However the other half may live significantly longer depending on the nature of the distribution. Gould needed to determine where his individual characteristics placed him within this range. Given that his cancer was detected early, he was young, optimistic, and had the best treatments available, he reasoned that he likely fell within the favorable tail of a right skewed distribution. After an experimental treatment of radiation, chemotherapy, and surgery, Gould made a full recovery, and his column became a source of comfort for many cancer patients.

Gould was also an advocate of medical cannabis. When undergoing his cancer treatments he smoked marijuana to help alleviate the long periods of intense and uncontrollable nausea. According to Gould, the drug had a “most important effect” on his eventual recovery. He later complained that he could not understand how “any humane person would withhold such a beneficial substance from people in such great need simply because others use it for different purposes.” On August 5, 1998, Gould’s testimony assisted in the successful lawsuit of HIV activist Jim Wakeford, who sued the Government of Canada for the right to cultivate, possess, and use marijuana for medical purposes.

In February 2002, a 3-centimetre (1.2 in) lesion was found on Gould’s chest radiograph, and oncologists diagnosed him with stage IV cancer. Gould died 10 weeks later on May 20, 2002, from a metastatic adenocarcinoma of the lung, an aggressive form of cancer which had already spread to his brain, liver, and spleen. This cancer was unrelated to his previous bout of abdominal cancer in 1982. He died in his home “in a bed set up in the library of his SoHo loft, surrounded by his wife Rhonda, his mother Eleanor, and the many books he loved.”

Gould began his higher education at Antioch College, graduating with a double major in geology and philosophy in 1963. During this time, he also studied at the University of Leeds in the United Kingdom. After completing graduate work at Columbia University in 1967 under the guidance of Norman Newell, he was immediately hired by Harvard University where he worked until the end of his life (1967–2002). In 1973, Harvard promoted him to professor of geology and curator of invertebrate paleontology at the institution’s Museum of Comparative Zoology.

In 1982, Harvard awarded him the title of Alexander Agassiz Professor of Zoology. That same year, he received the Golden Plate Award of the American Academy of Achievement.[38] In 1983, he was awarded a fellowship at the American Association for the Advancement of Science, where he later served as president (1999–2001). The AAAS news release cited his “numerous contributions to both scientific progress and the public understanding of science.”He also served as president of the Paleontological Society (1985–1986) and of the Society for the Study of Evolution (1990–1991).

In 1989 Gould was elected into the body of the National Academy of Sciences. Through 1996–2002 Gould was Vincent Astor Visiting Research Professor of Biology at New York University. In 2001, the American Humanist Association named him the Humanist of the Year for his lifetime of work. In 2008, he was posthumously awarded the Darwin-Wallace Medal, along with 12 other recipients. (Until 2008, this medal had been awarded every 50 years by the Linnean Society of London.)