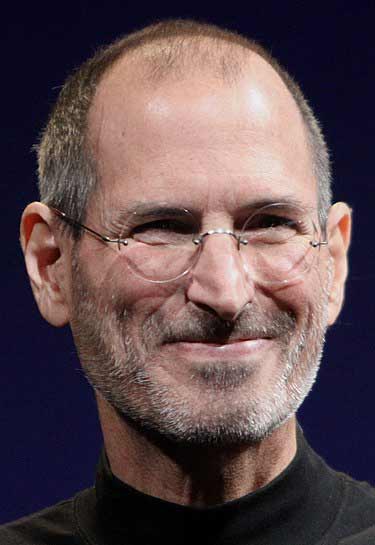 Photo: MetalGearLiquid, based on File:Steve_Jobs_Headshot_2010-CROP.jpg made by Matt Yohe / CC BY-SA (https://creativecommons.org/licenses/by-sa/3.0)

Cause of Death: Neuroendocrine cancer

Steven Paul Jobs (February 24, 1955 – October 5, 2011) was an American business magnate, industrial designer, investor, and media proprietor. He was the chairman, chief executive officer (CEO), and co-founder of Apple Inc., the chairman and majority shareholder of Pixar, a member of The Walt Disney Company’s board of directors following its acquisition of Pixar, and the founder, chairman, and CEO of NeXT. Jobs is widely recognized as a pioneer of the personal computer revolution of the 1970s and 1980s, along with Apple co-founder Steve Wozniak.

Jobs was born in San Francisco, California, and put up for adoption. He was raised in the San Francisco Bay Area. He attended Reed College in 1972 before dropping out that same year, and traveled through India in 1974 seeking enlightenment and studying Zen Buddhism. His declassified FBI report states that he used marijuana and LSD while he was in college, and once told a reporter that taking LSD was “one of the two or three most important things” he had done in his life.

Jobs and Wozniak co-founded Apple in 1976 to sell Wozniak’s Apple I personal computer. Together the duo gained fame and wealth a year later with the Apple II, one of the first highly successful mass-produced microcomputers. Jobs saw the commercial potential of the Xerox Alto in 1979, which was mouse-driven and had a graphical user interface (GUI). This led to the development of the unsuccessful Apple Lisa in 1983, followed by the breakthrough Macintosh in 1984, the first mass-produced computer with a GUI. The Macintosh introduced the desktop publishing industry in 1985 with the addition of the Apple LaserWriter, the first laser printer to feature vector graphics. Jobs was forced out of Apple in 1985 after a long power struggle with the company’s board and its then-CEO John Sculley. That same year, Jobs took a few of Apple’s members with him to found NeXT, a computer platform development company that specialized in computers for higher-education and business markets. In addition, he helped to develop the visual effects industry when he funded the computer graphics division of George Lucas’s Lucasfilm in 1986. The new company was Pixar, which produced the first 3D computer animated feature film Toy Story (1995).

Apple acquired NeXT in 1997, and Jobs became CEO of his former company within a few months. He was largely responsible for helping revive Apple, which had been on the verge of bankruptcy. He worked closely with designer Jony Ive to develop a line of products that had larger cultural ramifications, beginning in 1997 with the “Think different” advertising campaign and leading to the iMac, iTunes, iTunes Store, Apple Store, iPod, iPhone, App Store, and the iPad. In 2001, the original Mac OS was replaced with a completely new Mac OS X, based on NeXT’s NeXTSTEP platform, giving the OS a modern Unix-based foundation for the first time. Jobs was diagnosed with a pancreatic neuroendocrine tumor in 2003. He died of respiratory arrest related to the tumor at age 56 on October 5, 2011.

Jobs died at his Palo Alto, California home around 3 p.m. (PDT) on October 5, 2011, due to complications from a relapse of his previously treated islet-cell pancreatic neuroendocrine tumor, which resulted in respiratory arrest. He had lost consciousness the day before and died with his wife, children, and sisters at his side. His sister, Mona Simpson, described his death thus: “Steve’s final words, hours earlier, were monosyllables, repeated three times. Before embarking, he’d looked at his sister Patty, then for a long time at his children, then at his life’s partner, Laurene, and then over their shoulders past them. Steve’s final words were: ‘Oh wow. Oh wow. Oh wow.'” He then lost consciousness and died several hours later. A small private funeral was held on October 7, 2011, the details of which, out of respect for Jobs’s family, were not made public.

Apple and Pixar each issued announcements of his death. Apple announced on the same day that they had no plans for a public service, but were encouraging “well-wishers” to send their remembrance messages to an email address created to receive such messages. Apple and Microsoft both flew their flags at half-staff throughout their respective headquarters and campuses.

Bob Iger ordered all Disney properties, including Walt Disney World and Disneyland, to fly their flags at half-staff from October 6 to 12, 2011. For two weeks following his death, Apple displayed on its corporate Web site a simple page that showed Jobs’s name and lifespan next to his grayscale portrait. On October 19, 2011, Apple employees held a private memorial service for Jobs on the Apple campus in Cupertino. Jobs’s widow, Laurene, was in attendance, as well as Cook, Bill Campbell, Norah Jones, Al Gore, and Coldplay. Some of Apple’s retail stores closed briefly so employees could attend the memorial. A video of the service was uploaded to Apple’s website.

California Governor Jerry Brown declared Sunday, October 16, 2011, to be “Steve Jobs Day”. On that day, an invitation-only memorial was held at Stanford University. Those in attendance included Apple and other tech company executives, members of the media, celebrities, close friends of Jobs, and politicians, along with Jobs’s family. Bono, Yo Yo Ma, and Joan Baez performed at the service, which lasted longer than an hour. The service was highly secured, with guards at all of the university’s gates, and a helicopter flying overhead from an area news station. Each attendee was given a small brown box as a “farewell gift” from Jobs. The box contained a copy of the Autobiography of a Yogi by Paramahansa Yogananda.

Jobs is buried in an unmarked grave at Alta Mesa Memorial Park, the only nonsectarian cemetery in Palo Alto.