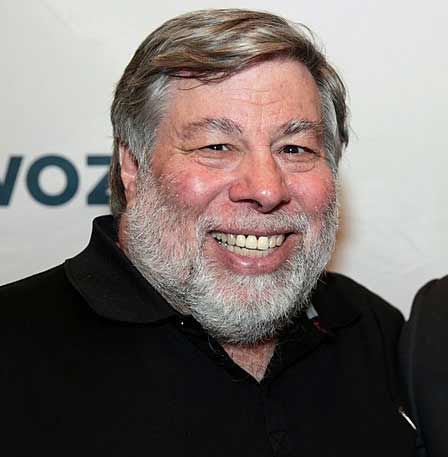 Stephen Gary Wozniak (born August 11, 1950), also known by his nickname “Woz”, is an American electronics engineer, programmer, philanthropist, and technology entrepreneur. In 1976, he co-founded Apple Inc., which later became the world’s largest information technology company by revenue and the largest company in the world by market capitalization. Through their work at Apple in the 1970s and 1980s, he and Apple co-founder Steve Jobs are widely recognized as two prominent pioneers of the personal computer revolution.

In 1975, Wozniak started developing the Apple I into the computer that launched Apple when he and Jobs first began marketing it the following year. He primarily designed the Apple II in 1977, known as one of the first highly successful mass-produced microcomputers, while Jobs oversaw the development of its foam-molded plastic case and early Apple employee Rod Holt developed the switching power supply. With software engineer Jef Raskin, Wozniak had a major influence over the initial development of the original Apple Macintosh concepts from 1979 to 1981, when Jobs took over the project following Wozniak’s brief departure from the company due to a traumatic airplane accident. After permanently leaving Apple in 1985, Wozniak founded CL 9 and created the first programmable universal remote, released in 1987. He then pursued several other businesses and philanthropic ventures throughout his career, focusing largely on technology in K–12 schools.

As of November 2019, Wozniak has remained an employee of Apple in a ceremonial capacity since stepping down in 1985.

Steve Wozniak was born and raised in San Jose, California, the son of Margaret Louise Wozniak (née Kern) (1923–2014) from Washington state and Francis Jacob “Jerry” Wozniak (1925–1994) from Michigan. His father, Jerry Wozniak, was an engineer for Lockheed Corporation. He graduated from Homestead High School in 1968, in Cupertino, California.

The name on Wozniak’s birth certificate is “Stephan Gary Wozniak”, but his mother said that she intended it to be spelled “Stephen,” which is what he uses. Wozniak has mentioned his surname being Ukrainian and has spoken of his Ukrainian and Polish descent.

In the early 1970s, Wozniak’s blue box design earned him the nickname “Berkeley Blue” in the phreaking community.

Wozniak has credited watching Star Trek and attending Star Trek conventions while in his youth as a source of inspiration for his starting Apple Inc.

Paul Allen and Wozniak at the Living Computer Museum in 2017

Wozniak lives in Los Gatos, California. He applied for Australian citizenship in 2012, and has stated that he would like to live in Melbourne, Australia in the future. Wozniak has been referred to frequently by the nickname “Woz”, or “The Woz”; he has also been called “The Wonderful Wizard of Woz” and “The Second Steve” (in regard to his early business partner and longtime friend, Steve Jobs). “WoZ” (short for “Wheels of Zeus”) is the name of a company Wozniak founded in 2002.

Wozniak describes his impetus for joining the Freemasons in 1979 as being able to spend more time with his then-wife, Alice Robertson, who belonged to the Order of the Eastern Star, associated with the Masons. Wozniak has said that he quickly rose to a third degree Freemason because, whatever he does, he tries to do well. He was initiated in 1979 at Charity Lodge No. 362 in Campbell, California, now part of Mt. Moriah Lodge No. 292 in Los Gatos. Today he is no longer involved: “I did become a Freemason and know what it’s about but it doesn’t really fit my tech/geek personality. Still, I can be polite to others from other walks of life. After our divorce was filed I never attended again but I did contribute enough for a lifetime membership.”

Wozniak was married to slalom canoe gold-medalist Candice Clark from June 1981 to 1987. They have three children together, the youngest being born after their divorce was finalized. After a high-profile relationship with actress Kathy Griffin, who described him on Tom Green’s House Tonight in 2008 as “the biggest techno-nerd in the Universe”, Wozniak married Janet Hill, his current spouse.

On his religious views, Wozniak has called himself an “atheist or agnostic”.

He is a member of a Segway Polo team, the Silicon Valley Aftershocks.

In 2006, he co-authored with Gina Smith his autobiography, iWoz: From Computer Geek to Cult Icon: How I Invented the Personal Computer, Co-Founded Apple, and Had Fun Doing It. The book made The New York Times Best Seller list.

Wozniak’s favorite video game is Tetris for Game Boy, and he had a high score for Sabotage. In the 1990s he submitted so many high scores for Tetris to Nintendo Power that they would no longer print his scores, so he started sending them in under the reversed name “Evets Kainzow”. Prior to the release of Game Boy, Wozniak called Gran Trak 10 his “favorite game ever” and said that he played the arcade while developing hardware for the first version of Breakout for Atari. In 1985, Steve Jobs referred to Wozniak as a Gran Trak 10 “addict”.

Wozniak has expressed his personal disdain for money and accumulating large amounts of wealth. He told Fortune magazine in 2017, “I didn’t want to be near money, because it could corrupt your values… I really didn’t want to be in that super ‘more than you could ever need’ category.” He also said that he only invests in things “close to his heart”. When Apple first went public in 1980, Wozniak offered $10 million of his own stock to early Apple employees, something Jobs refused to do.

Wozniak has the condition prosopagnosia, or face-blindness.