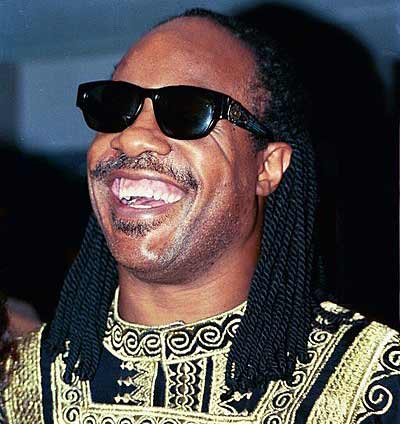 Stevland Hardaway Morris (né Judkins; born May 13, 1950), known professionally as Stevie Wonder, is an American singer, songwriter, musician and record producer. A prominent figure in popular music during the second-half of the 20th century, Wonder is one of the most successful songwriters and musicians. A virtual one-man band, his use of synthesizers and further electronic musical instruments during the 1970s reshaped the conventions of R&B. He also helped drive the genre into the album era, crafting his LPs as cohesive, consistent socially conscious statements with complex compositions. Wonder is often hailed as a “genius”, and has been credited as a pioneer and influence to musicians of various genres including rhythm and blues, pop, soul, gospel, funk and jazz.

Blind since shortly after his birth, Wonder was a child prodigy known as Little Stevie Wonder, leading him to sign with Motown’s Tamla label at the age of 11. In 1963, the single “Fingertips” was a number-one hit on the Billboard Hot 100 when Wonder was 13, making him the youngest artist ever to top the chart. Wonder’s critical success was at its peak in the 1970s. His “classic period” began in 1972 with the releases of Music of My Mind and Talking Book, the latter featuring “Superstition”, which is one of the most distinctive and famous examples of the sound of the Hohner Clavinet keyboard. His works Innervisions (1973), Fulfillingness’ First Finale (1974) and Songs in the Key of Life (1976) all won the Grammy Award for Album of the Year, making him the tied-record holder for the most Album of the Year wins, with three. He is also the only artist to have won the award with three consecutive album releases.

Wonder’s “classic period”, which culminated in 1976, was noted for his funky style of playing on the keyboard, personal control of production, and series of songs integrated with one another to make a concept album. In 1979, Wonder made use of the early music sampler Computer Music Melodian through his composition of the soundtrack album Stevie Wonder’s Journey Through “The Secret Life of Plants”. It was also his first digital recording, and one of the earliest popular albums to use the technology, which Wonder used for all subsequent recordings. Wonder’s 1970s albums are widely regarded by writers as very influential, as his pioneering stylistic approach to his music helped shaping the sound of pop music in the following decade.

Wonder has sold over 100 million records worldwide, making him one of the best-selling music artists of all time. He has won 25 Grammy Awards, making him the Grammy’s most awarded solo artist of all time. He was the first Motown artist and second African-American musician to win an Academy Award for Best Original Song, for the 1984 film The Woman in Red. Wonder has been inducted into the Rhythm and Blues Music Hall of Fame, Rock and Rock Hall of Fame and Songwriters Hall of Fame, and has received a star on the Hollywood Walk of Fame. He is also noted for his work as an activist for political causes, including his 1980 campaign to make Martin Luther King Jr.’s birthday a holiday in the United States. In 2009, he was named a United Nations Messenger of Peace. In 2014, he was honored with the Presidential Medal of Freedom.

Wonder was born Stevland Hardaway Judkins in Saginaw, Michigan, on May 13, 1950, the third of six children born to Calvin Judkins and songwriter Lula Mae Hardaway. He was born six weeks premature which, along with the oxygen-rich atmosphere in the hospital incubator, resulted in retinopathy of prematurity, a condition in which the growth of the eyes is aborted and causes the retinas to detach, so he became blind.

When Wonder was four, his mother divorced his father and moved with her children to Detroit, Michigan, where Wonder sang as a child in a choir at the Whitestone Baptist Church. She changed her name back to Lula Hardaway and later changed her son’s surname to Morris, partly because of relatives. Wonder has retained Morris as his legal surname. He began playing instruments at an early age, including piano, harmonica, and drums. He formed a singing partnership with a friend; calling themselves Stevie and John, they played on street corners and occasionally at parties and dances.

As a child, Wonder attended Fitzgerald Elementary School. After his first album was released, he enrolled in Michigan School for the Blind.

Wonder has been married three times. He was married to Motown singer-songwriter and frequent collaborator Syreeta Wright from 1970 until their amicable divorce in 1972. From 2001 until 2012 he was married to fashion designer Kai Millard. In October 2009, Wonder and Millard separated; Wonder filed for divorce in August 2012. In 2017 he married Tomeeka Bracy.

Wonder has nine children by five different women. The mother of Wonder’s first child is Yolanda Simmons, whom Wonder met when she applied for a job as secretary for his publishing company. Simmons gave birth to Wonder’s daughter Aisha Morris on February 2, 1975. After Aisha was born, Wonder said “she was the one thing that I needed in my life and in my music for a long time”. Aisha was the inspiration for Wonder’s hit single “Isn’t She Lovely?” She is now a singer who has toured with her father and accompanied him on recordings, including his 2005 album A Time to Love. Wonder and Simmons also had a son, Keita, in 1977.

In 1983, Wonder had a son named Mumtaz Morris with Melody McCulley. Wonder also has a daughter, Sophia, and a son, Kwame, with a woman whose identity has not been publicly disclosed. Wonder has two sons with second wife Kai Millard Morris; the elder is named Kailand and he occasionally performs as a drummer on stage with his father. The younger son, Mandla Kadjay Carl Stevland Morris, was born on May 13, 2005, his father’s 55th birthday.

Wonder’s ninth child, his second with Tomeeka Robyn Bracy, was born in December 2014, amid rumors that he would be the father to triplets. This turned out not to be the case, and the couple’s new daughter was given the name Nia, meaning “purpose”–one of the seven principles of Kwanzaa. The name of Wonder’s first child with Bracy is unknown.

On May 31, 2006, Wonder’s mother Lula Mae Hardaway died in Los Angeles at the age of 76. During his September 8, 2008, UK concert in Birmingham, he spoke of his decision to begin touring again following his loss: “I want to take all the pain that I feel and celebrate and turn it around.”

Wonder was introduced to Transcendental Meditation through his marriage to Syreeta Wright. Consistent with that spiritual vision, Wonder became vegetarian, and later a vegan, singing about it in October 2015 on The Late Late Show with James Corden during the show’s “Carpool Karaoke” segment.

Wonder joined Twitter on April 4, 2018, and his first tweet was a five-minute video honoring Martin Luther King, Jr. Dozens of famous personalities were rounded up in the video, which was titled “The Dream Still Lives”. Each person involved shared their dream, calling back to King’s popular speech in 1963. Wonder’s very first tweet took the Internet by storm, and he also encouraged viewers to share their own videos about their dreams with the hashtag #DreamStillLives.

Wonder has been a longtime Baptist affiliated with black churches.

On August 31, 2018, Wonder performed at the funeral of Aretha Franklin at Detroit’s Greater Grace Temple. He closed the ceremony with a rendition of the Lord’s Prayer and his song “As”.

At a concert in London’s Hyde Park on July 6, 2019, Wonder announced that he would be undergoing a kidney transplant in September.