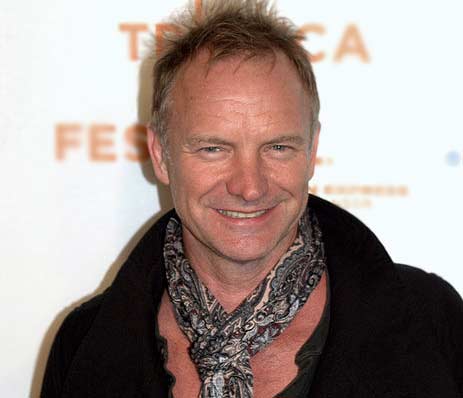 Gordon Matthew Thomas Sumner CBE (born 2 October 1951), known as Sting, is an English musician and actor. He was the principal songwriter, lead singer, and bassist for the new wave rock band the Police from 1977 to 1984, and launched a solo career in 1985. He has included elements of rock, jazz, reggae, classical, new-age and worldbeat in his music.

As a solo musician and a member of The Police, Sting has received 17 Grammy Awards: he won Song of the Year for “Every Breath You Take”, three Brit Awards, including Best British Male Artist in 1994 and Outstanding Contribution in 2002, a Golden Globe, an Emmy and four nominations for the Academy Award for Best Original Song. In 2019, he received a BMI Award for “Every Breath You Take” becoming the most played song in radio history. In 2002, Sting received the Ivor Novello Award for Lifetime Achievement from the British Academy of Songwriters, Composers and Authors and was also inducted into the Songwriters Hall of Fame. He was inducted into the Rock and Roll Hall of Fame as a member of the Police in 2003. In 2000, he received a star on the Hollywood Walk of Fame for recording. In 2003, Sting received a CBE from Elizabeth II at Buckingham Palace for services to music. He was made a Kennedy Center Honoree at the White House in 2014, and was awarded the Polar Music Prize in 2017.

With the Police, Sting became one of the world’s best-selling music artists. Solo and with the Police combined, he has sold over 100 million records. In 2006, Paste ranked him 62nd of the 100 best living songwriters. He was 63rd of VH1’s 100 greatest artists of rock, and 80th of Q magazine’s 100 greatest musical stars of the 20th century. He has collaborated with other musicians on songs such as “Money for Nothing” with Dire Straits, “Rise & Fall” with Craig David, “All for Love” with Bryan Adams and Rod Stewart, “You Will Be My Ain True Love” with Alison Krauss, and introduced the North African music genre raï to Western audiences through the hit song “Desert Rose” with Cheb Mami. In 2018, he released the album 44/876, a collaboration with Jamaican musician Shaggy, which won the Grammy Award for Best Reggae Album in 2019.

Gordon Matthew Thomas Sumner was born on 2 October 1951, at Sir G B Hunter Memorial Hospital in Wallsend, Northumberland, England, the eldest of four children of Audrey (née Cowell), a hairdresser, and Ernest Matthew Sumner, a milkman and engineer. He grew up near Wallsend’s shipyards, which made an impression on him. At eight or ten years old, he was inspired by the Queen Mother waving at him from a Rolls-Royce to divert from the shipyard prospect towards a more glamorous life. He helped his father deliver milk and by ten was “obsessed” with an old Spanish guitar left by an emigrating friend of his father.

He attended St Cuthbert’s Grammar School in Newcastle upon Tyne. He visited nightclubs such as Club A’Gogo to see Cream and Manfred Mann, who influenced his music. After leaving school in 1969, he enrolled at the University of Warwick in Coventry, but left after a term. After working as a bus conductor, building labourer and tax officer, he attended the Northern Counties College of Education (now Northumbria University) from 1971 to 1974 and qualified as a teacher. He taught at St Paul’s First School in Cramlington for two years.

Sting performed jazz in the evening, weekends and during breaks from college and teaching, playing with the Phoenix Jazzmen, Newcastle Big Band, and Last Exit. He gained his nickname after his habit of wearing a black and yellow sweater with hooped stripes with the Phoenix Jazzmen. Bandleader Gordon Solomon thought he looked like a bee (or according to Sting himself, “they thought I looked like a wasp”), which prompted the name “Sting”. In the 1985 documentary Bring on the Night a journalist called him Gordon, to which he replied, “My children call me Sting, my mother calls me Sting, who is this Gordon character?” In 2011, he told Time that “I was never called Gordon. You could shout ‘Gordon’ in the street and I would just move out of your way.”

Sting married actress Frances Tomelty on 1 May 1976. Before they divorced in 1984, they had two children: Joseph (born 23 November 1976) and Fuchsia Katherine (“Kate”, born 17 April 1982). In 1980, Sting became a tax exile in Galway in Ireland. In 1982, after the birth of his second child, he separated from Tomelty and began living with actress and film producer Trudie Styler. The couple married at Camden Registry Office on 20 August 1992, and had their wedding blessed two days later in the twelfth-century parish church of St Andrew in Great Durnford, Wiltshire, south-west England. Sting and Styler have four children: Brigitte Michael (“Mickey”, born 19 January 1984), Jake (24 May 1985), Eliot Pauline (nicknamed “Coco”, 30 July 1990), and Giacomo Luke (17 December 1995). Coco is a singer who now goes by the name Eliot Sumner, and was the founder and lead singer of the group I Blame Coco. Giacomo Luke is the inspiration behind the name of Kentucky Derby–winning horse Giacomo.

Both of Sting’s parents died of cancer: his mother in 1986 and his father in 1987. He did not attend either parent’s funeral, in order not to bring media attention to them.

In 1995, Sting gave evidence in court against his former accountant (Keith Moore), who had misappropriated £6m (US$7.6m) of his money. Moore was jailed for six years. Sting owns several homes worldwide, including Lake House and its sixty-acre estate near Salisbury, Wiltshire; a cottage in the Lake District, north-west England; a New York City flat (which was once owned by Billy Joel); a beach house in Malibu; the Villa Il Palagio estate in Rignano sull’Arno, Tuscany; and two homes in London.

Sting ran five miles (8 km) a day and performed aerobics. He participated in running races at Parliament Hill and charity runs. Around 1990, Danny Paradise introduced him to yoga, and he began practising Ashtanga Vinyasa Yoga series, though he now practises Tantra and Jivamukti Yoga as well. He wrote a foreword to Yoga Beyond Belief, written by Ganga White in 2007. In 2008, he was reported to practise Maharishi Mahesh Yogi’s Transcendental Meditation technique.

Sting’s affinity with yoga contributed to a rumour about his sexual prowess, including a purported eight hours of sex with Styler. The story stems from an interview with Sting and Bob Geldof. A journalist asked “how do you perform in bed?” and Geldof remarked that he was a “three-minute man” but Sting could last for hours thanks to yoga.

In 1969, Sting read the Gormenghast trilogy by Mervyn Peake and later bought the film rights. He named pets, a racehorse, his publishing company, and one of his daughters (Fuchsia) after characters from the books.

Sting supports his hometown Premier League football club Newcastle United, and in 2009 backed a supporters’ campaign against the plan of owner Mike Ashley to sell off naming rights of the club’s home stadium St James’ Park. He wrote a song in support of Newcastle, called “Black and White Army (Bringing The Pride Back Home)”.

In a 2011 interview in Time, Sting said that he was agnostic and that the certainties of religious faith were dangerous.

In August 2013, Sting donated money to The Friends of Tynemouth Outdoor Pool to regenerate the 1920s lido at the southern end of Longsands Beach in Tynemouth, northeast England, a few miles from where he was born.