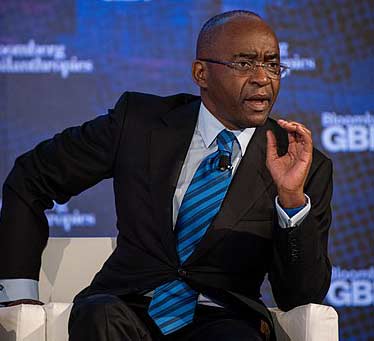 Board member of: Unilever, The Rockefeller Foundation

Strive Masiyiwa (born 29 January 1961) is a London-based Zimbabwean billionaire businessman and philanthropist. He is the founder and executive chairman of the telecommunications company Econet Global.

He has gained international recognition for his business expertise and philanthropy, and is considered one of Africa’s most generous humanitarians. Masiyiwa has provided scholarships to over 250,000 young Africans over the past 20 years through his family foundation. He supports more than 40,000 orphans with educational initiatives and sponsors students at universities in America, The United Kingdom, and China. Over the last few years, Masiyiwa has devoted his time to mentoring the next generation of African entrepreneurs on Facebook. Facebook has identified his platform as having the most engaged following of any business leader in the world.

Masiyiwa also funds initiatives in public health and agriculture across the African continent.

He is married to Tsitsi, they have six children, and live in London, England. Masiyiwa owns two adjacent apartments atop the 29-storey Eldorado Tower at 300 Central Park in New York City, bought for US$24.5 million in 2016.

Strive Masiyiwa was born in Zimbabwe on 29 January 1961. He attended primary school in Zambia before completing his secondary education in Scotland. When he was seven, his family fled the country after Ian Smith’s government declared independence from Britain. The family settled in Kitwe, a city in north central Zambia known for its copper mines. Masiyiwa’s mother was an entrepreneur. His father worked at first in one of the nearby mines but later joined the family business. By the time Masiyiwa was 12 years old, his parents could afford to provide him with a coveted European education.

They sent him to private school in Edinburgh, Scotland. When he graduated in 1978, he travelled back to Zimbabwe, intending to join the anti-government guerrilla forces there. However, he returned to school in Britain, and earned a degree in Electrical Engineering from University of Wales in 1983. He worked briefly in the computer industry in Cambridge, England, but soon returned to Zimbabwe in 1984, hoping to aid the country’s recovery after the war of independence it had won in 1980.