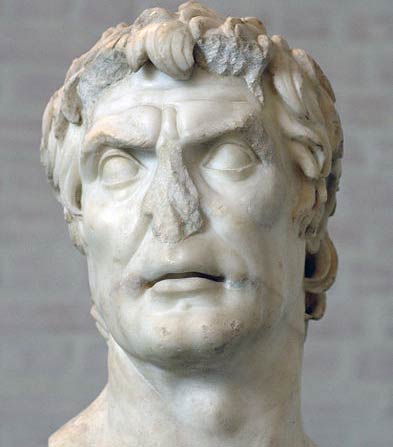 Lucius Cornelius Sulla Felix (138–78 BC), commonly known simply as Sulla, was a Roman general and statesman who won the first large-scale civil war in Roman history and became the first man of the Republic to seize power through force. He had the distinction of holding the office of consul twice, as well as reviving the dictatorship. Sulla was a gifted and innovative general, achieving numerous successes in wars against different opponents, both foreign and domestic. Sulla rose to prominence during the war against the Numidian king Jugurtha, whom he captured through betrayal, although his superior Gaius Marius took credit for ending the war. He then fought successfully against Germanic tribes during the Cimbrian War, and Italic tribes during the Social War. He was even awarded the Grass Crown for his command in the latter war.

Sulla played an important role in the long political struggle between the Optimates and Populares factions at Rome. He was a leader of the former, which sought to maintain the Senatorial supremacy against the social reforms advocated by the latter, headed by Marius. In a dispute over the command of the war against Mithridates, initially awarded to Sulla by the Senate but withdrawn as a result of Marius’s intrigues, Sulla marched on Rome in an unprecedented act and defeated Marius in battle. The Populares nonetheless seized power once he left with his army to Asia. He returned victorious from the East in 82 BC, marched a second time on Rome, and crushed the Populares and their Italian allies at the Battle of the Colline Gate. He then revived the office of dictator, which had been inactive since the Second Punic War over a century before. He used his powers to purge his opponents, and reform Roman constitutional laws, in order to restore the primacy of the Senate and limit the power of the tribunes of the plebs. Resigning his dictatorship in 79 BC, Sulla retired to private life and died the following year.

Sulla’s military coup—ironically enabled by Marius’ military reforms that bound the army’s loyalty with the general rather than to the Republic—permanently destabilized the Roman power structure. Later leaders like Julius Caesar would follow his precedent in attaining political power through force.

Sulla, the son of Lucius Cornelius Sulla and the grandson of Publius Cornelius Sulla, was born into a branch of the patrician gens Cornelia, but his family had fallen to an impoverished condition at the time of his birth. The reason behind this was because an ancestor, Publius Cornelius Rufinius, was banished from the senate after having been caught possessing more than ten pounds of silver plate. As a result of this, Sulla’s branch of the gens lost public standing and never retained the position of consul or dictator until Sulla came. A story goes as the following, when he was a baby: his nurse was carrying him around the streets and a strange woman walked up to her and said, “Puer tibi et reipublicae tuae felix”. This can be translated: “The boy will be a source of luck to you and your state”. Lacking ready money, Sulla spent his youth among Rome’s comics, actors, lute-players, and dancers. During these times on the stage, he, after initially singing, started writing plays, Atellan farces, a kind of crude comedy. He retained an attachment to the debauched nature of his youth until the end of his life; Plutarch mentions that during his last marriage – to Valeria – he still kept company with “actresses, musicians, and dancers, drinking with them on couches night and day”.

It seems certain that Sulla received a good education. Sallust declares him well-read and intelligent, and he was fluent in Greek, which was a sign of education in Rome. The means by which Sulla attained the fortune which later would enable him to ascend the ladder of Roman politics, the Cursus honorum, are not clear, although Plutarch refers to two inheritances; one from his stepmother (who loved him dearly, as if he were her own son) and the other from Nicopolis, a (Greek?) low-born woman, but became rich.

After his second consulship, and as promised when his tasks were complete, Sulla returned his powers and withdrew to his country villa near Puteoli to be with his family. Plutarch states in his “Life of Sulla” that he retired to a life spent in dissolute luxuries: “He consorted with actresses, harpists, and theatrical people, drinking with them on couches all day long”. From this distance, Sulla remained out of the day-to-day political activities in Rome, intervening only a few times when his policies were involved (e.g., the execution of Granius shortly before his own death).

Sulla’s goal now was to write his memoirs, which he finished in 78 BC, just before his death. They are now largely lost, although fragments from them exist as quotations in later writers. Ancient accounts of Sulla’s death indicate that he died from liver failure or a ruptured gastric ulcer (symptomised by a sudden haemorrhage from his mouth followed by a fever from which he never recovered) possibly caused by chronic alcohol abuse. Accounts were also written that he had an infestation of worms, caused by the ulcers, which led to his death.

His public funeral in Rome (in the Forum, in the presence of the whole city) was on a scale unmatched until that of Augustus in AD 14. Sulla’s body was brought into the city on a golden bier, escorted by his veteran soldiers, and orations were delivered by several eminent senators: the main funeral oration was delivered by Lucius Marcius Philippus. Sulla’s body was cremated and his ashes placed in his tomb in the Campus Martius. An epitaph, which Sulla composed himself, was inscribed onto the tomb, reading: “No friend ever served me, and no enemy ever wronged me, whom I have not repaid in full”.

Plutarch claims he had seen Sulla’s personal motto carved on his tomb on the Campus Martius. The personal motto was ‘no better friend, no worse enemy’.