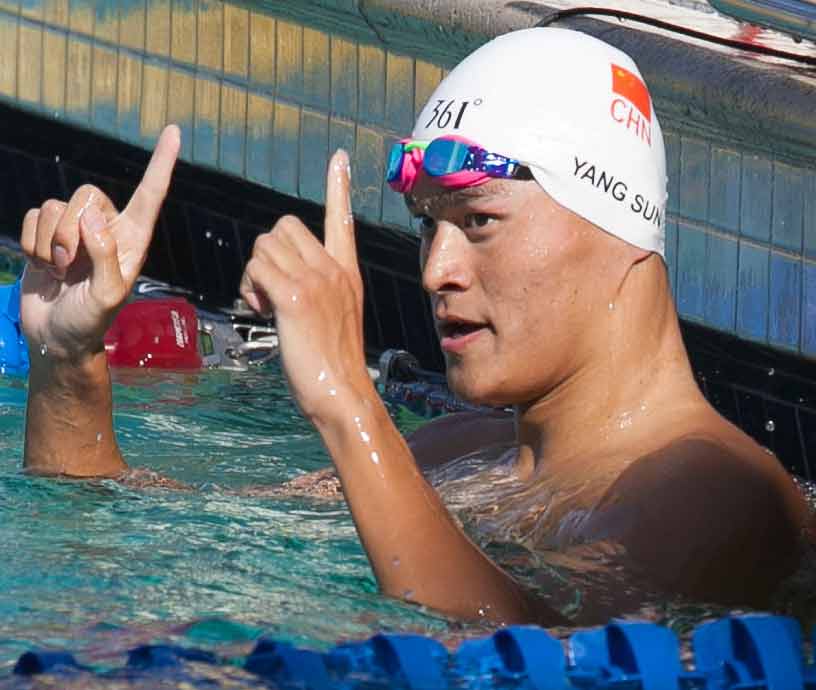 Photo: JD Lasica from Pleasanton, CA, US / CC BY (https://creativecommons.org/licenses/by/2.0)

Sun Yang (Chinese: 孙杨; Mandarin pronunciation: born 1 December 1991) is a Chinese Olympic and world-record-holding competitive swimmer. In 2012, Sun became the first Chinese man to win an Olympic gold medal in swimming. Sun is the first male swimmer in history to earn Olympic and World Championship gold medals at every freestyle distance between 200 and 1500 metres. A three-time Olympic gold medallist and eleven-time world champion, he is the most decorated Chinese swimmer in history. In 2017, NBC Sports described him as “arguably the greatest freestyle swimmer of all time”.

In May 2014, Sun was banned for three months by the Chinese Swimming Association (CSA) after he tested positive for trimetazidine, a drug that was banned only four months earlier and classified as a banned stimulant at the time by the World Anti-Doping Agency (WADA). He said that a doctor prescribed the drug to him to treat heart palpitations, a condition he has suffered since 2008. WADA, after reviewing the full case file, announced that they would not challenge the CSA’s decision to impose a three-month sanction. Since Sun’s ban, WADA has reclassified trimetazidine from an S6 stimulant (prohibited in competition) to an S4 hormone and metabolic modulator (prohibited in and out of competition).

In September 2018, Sun was involved in an incident during an out-of-competition anti-doping test at his home, during which he and his staff smashed open a container of blood sample vials with a hammer because he had believed that the testing personnel did not have proper credentials. Following an investigation, the international governing body for swimming, FINA, concluded that Sun did not commit an anti-doping rule violation. WADA disagreed with FINA’s decision and lodged an appeal with the Court of Arbitration for Sport (CAS), which accepted the case and held a public hearing in November 2019. On 28 February 2020, CAS delivered its findings, overturning FINA’s decision and banning Sun for eight years for tampering with the doping control process. The CAS clarified that Sun (the Athlete) would not be stripped of any of his medals because “doping tests performed on the Athlete shortly before and after the aborted doping control in September 2018 were negative” and “in the absence of any evidence that the Athlete may have engaged in doping activity since 4 September 2018, including on the occasion of the FINA World Championships in Gwangju, South Korea in July 2019, the results achieved by the Athlete in the period prior to the CAS award being issued should not be disqualified.”

Sun was born on 1 December 1991 in Hangzhou, Zhejiang, China. He was named after his parents’ surnames. Sun is an only child, and his family is athletic. His father, Sun Quanhong (孙全洪), was a basketball player for Anhui Tigong and is also tall. His mother, Yang Ming (杨明), was a volleyball player for Zhejiang and is a sports coach. Sun started swimming in 1998, and his potential was recognised by a teacher at Jinglun Sports School in Hangzhou.

As of 2019, Sun has received the following awards: