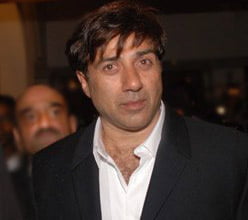 Ajay Singh Deol (born 19 October 1956), better known as Sunny Deol, is an Indian film actor, director, producer, politician and the current member of parliament from Gurdaspur (Lok Sabha constituency) of Punjab State. He is known for his work in Hindi cinema and has won two National Film Awards and two Filmfare Awards.

Deol made his debut opposite fellow debutante Amrita Singh in Betaab (1982), for which he received a Filmfare Best Actor Award nomination. Subsequently, he went on to star in numerous successful films in the 1980s and 1990s and considered one of the most successful stars of that time. With his portrayal of an amateur boxer wrongly accused of his brother’s murder in Rajkumar Santoshi’s Ghayal in 1990, Deol gained wide recognition and praise and won the Filmfare Award for Best Actor and the National Film Award – Special Jury Award / Special Mention (Feature Film). His portrayal of a lawyer in the film Damini – Lightning (1993) won him the National Film Award for Best Supporting Actor and the Filmfare Award for Best Supporting Actor. Anil Sharma’s Gadar: Ek Prem Katha (2001), in which Deol portrayed a lorry driver who falls in love with a Muslim girl, was the highest grossing Bollywood film ever at the time of its release, and garnered him a Filmfare Best Actor Award nomination.

Deol was born into a Jat Sikh family on 19 October 1956, in the village of Sahnewal in Punjab, India, to Bollywood actor Dharmendra and Prakash Kaur.

He has a younger brother Bobby Deol and two sisters Vijayta and Ajeeta who are settled in California. His step-mother is Hema Malini, through whom he has two paternal half-sisters, actress Esha Deol and Ahana Deol. His cousin Abhay Deol is also an actor.

Deol made his debut in the 1983 romantic film Betaab in which role he was praised and he was nominated for best actor at Filmfare Awards. Deol has appeared in Rahul Rawail’s Arjun (1985), in which he played the titular role of an unemployed youngster. The film went on to become a major hit and established Deol’s status as an action hero. In 1986 he appeared alongside his father in Sultanat. In the final years of the decade he appeared in several hits including Dacait (1987), Yateem (1988) and Paap Ki Duniya (1988). In 1989, he had back to back hits with Rajiv Rai’s Tridev and Pankaj Parashar’s ChaalBaaz. He even won his first Filmfare Award for Best Actor in Rajkumar Santoshi’s 1990 film Ghayal. He paired with Aditya Pancholi in Vishnu-Devaa (1991). From 1992–1997, he gave back to back hits with films like Lootere, Darr, Jeet, Ghatak, Border and Ziddi. In 1999 he made his directorial debut with Dillagi starring himself, his brother and Urmila Matondkar.

His first hit in the millennium was Anil Sharma’s 2001 film Gadar. In 2003 he teamed up with director Anil Sharma yet again for The Hero: Love Story of a Spy, which also starred Preity Zinta and Priyanka Chopra. Released on 11 April, The Hero was billed as Bollywood’s most expensive film at that time with an estimated budget of ₹600 million (US$8.4 million). The film became the third highest-grossing Bollywood film of that year. Sunny appeared alongside his father Dharmendra and Bobby Deol together for the first time in Apne (2007). In 2008, he appeared with his brother again in the ensemble film Heroes.

Deol’s first release of 2010 was Neeraj Pathak’s crime thriller Right Yaaa Wrong which had him playing a police inspector. Yamla Pagla Deewana which also featured him alongside his father and brother was Sunny’s only release in 2011 and was one of the biggest successes of the year. In 2011, he started working in Radhika Rao and Vinay Sapru’s I Love NY opposite Kangana Ranaut and in Chandraprakash Dwivedi’s Mohalla Assi opposite Sakshi Tanwar, but due to some reason both films were delayed and released several years later.

For the first time in his career, Sunny lent his voice (for Bheem) in the Animated film Mahabharata; produced by Jayantilal Gada of PEN India Pvt Ltd. It earned US$6.7 million whereas Yamla Pagla Deewana earned US$14 million. Yamla Pagla Deewana 2, a sequel to his 2011 hit was released in 2013 but the film was a critical and box office failure. In the end of 2013 Sunny teamed up with Anil Sharma yet again for Singh Saab The Great which was loved massively and created a big pandemonium in the cinema hall as well as on Facebook.

In 2016, Ghayal Once Again was released which is a sequel to his 1990 film Ghayal and is the second film directed by him. In 2017 he and his brother appeared in Shreyas Talpade’s comedy film Poster Boys, which became a semi hit at the box office. In 2018, Deol appeared in Yamla Pagla Deewana: Phir Se, the third film in the franchise. Also that year, two of his long delayed films Bhaiyyaji Superhitt (where he plays a double role for the first time). and Mohalla Assi were released. In 2019, he directed his third film Pal Pal Dil Ke Paas, marking the debut of his son Karan Deol.