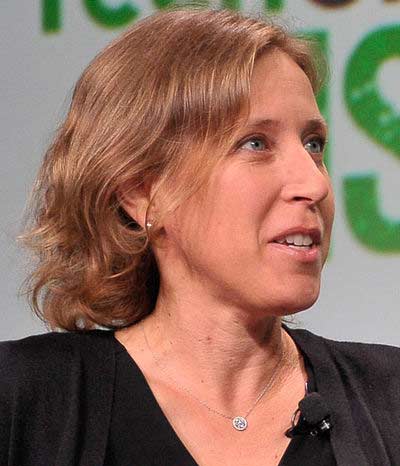 Wojcicki was involved in the founding of Google, and became Google’s first marketing manager in 1999. She later led the company’s online advertising business and was put in charge of Google’s original video service. After observing the success of YouTube, Wojcicki proposed the acquisition of YouTube by Google in 2006, and has served as CEO of YouTube since 2014 .

Wojcicki has an estimated net worth of nearly $500 million.

Susan Diane Wojcicki was born on July 5, 1968 to Esther Wojcicki, an educator of Russian-Jewish descent, and Stanley Wojcicki, a Polish American physics professor at Stanford University. She has two sisters: Janet Wojcicki, (PhD, anthropologist and epidemiologist) and Anne Wojcicki, founder of 23andMe. She grew up on the Stanford campus with George Dantzig as a neighbor. She attended Gunn High School in Palo Alto, California, and wrote for the school newspaper.

Wojcicki’s first business was selling “spice ropes” door-to-door at age 11. A humanities major in college, she took her first computer science class as a senior.

Wojcicki studied history and literature at Harvard University and graduated with honors in 1990. She originally planned on getting a PhD in economics and pursuing a career in academia but changed her plans when she discovered an interest in technology.

She also received her Master’s of Science in economics from the University of California, Santa Cruz in 1993 and a Master of Business Administration from the UCLA Anderson School of Management in 1998.

In September 1998, the same month that Google was incorporated, founders Larry Page and Sergey Brin set up office in Wojcicki’s garage in Menlo Park. Before becoming Google’s first marketing manager in 1999, Wojcicki worked in marketing at Intel Corporation in Santa Clara, California, and was a management consultant at Bain & Company and R.B. Webber & Company. At Google, she worked on the initial viral marketing programs, as well as the first Google Doodles. Wojcicki also worked on the development of Google Images and Google Books.

In 2003, Wojcicki helped lead the development of AdSense. She served as its first product manager, and for her efforts, was awarded the Google Founders’ Award. She became Google’s senior vice president of Advertising & Commerce, and oversaw the company’s advertising and analytic products, including AdWords, AdSense, DoubleClick, and Google Analytics.

YouTube, then a small start-up, was successfully competing with Google’s Google Video service, overseen by Wojcicki. Her response was to propose the purchase of YouTube.

Wojcicki, was named one of Time’s 100 most influential people in 2015 and described in a later issue of Time as “the most powerful woman on the Internet.”

While Wojcicki has been CEO of YouTube, it has reached 2 billion logged-in users a month and announced that users were collectively watching one billion hours a day. There are localized versions of YouTube in 100 countries around the world, available in 80 languages. Since taking on the role of CEO, YouTube’s percentage of female employees has risen from 24 to nearly 30 percent.

Wojcicki has overseen the development and release of new YouTube applications and experiences designed to cater to users interested in family gaming, and music content. Under her leadership, the company has developed additional forms of monetization for YouTube creators, including channel memberships, merchandise, and Super Chat. She also oversaw the launch of YouTube’s advertisement-free subscription service, YouTube Premium (formerly known as YouTube Red), and its over-the-top internet television service YouTube TV.

Under Wojcicki, YouTube has tightened its policy on videos it regards as potentially violating its policies on hate speech and violent extremism. The more stringent policies came after The Times showed that “ads sponsored by the British government and several private sector companies had appeared ahead of YouTube videos supporting terrorist groups” and several large advertisers withdrew their ads from YouTube in response. The enforcement policies have been criticized as censorship. Some YouTubers argue that the demonetization system is way too strict, causing any remotely “edgy” content getting demonetized and in some cases even resulting in the creators channel being removed. During the controversy surrounding Logan Paul’s YouTube video about a person that committed suicide, Wojcicki said that Paul did not violate YouTube’s three strike policy and did not meet the criteria for being banned from the platform.

Wojcicki has emphasized educational content as a priority for the company, and on July 20, 2018, announced YouTube Learning to invest in grants and promotion to support education-focused creator content.

On October 22, 2018, Wojcicki criticized Article 13 of the European Union Copyright Directive that would give YouTube the sole responsibility for removing copyrighted content, saying it would pose a threat to content creators’ ability to share their work.

In addition to her U.S. citizenship, she is a Polish citizen. Her grandfather, Franciszek Wójcicki [pl], was a People’s Party and Polish People’s Party politician who had been elected MP during the Polish legislative election, 1947. Her grandmother, Janina Wójcicka Hoskins, was a Polish-American librarian at the Library of Congress, responsible for building the largest collection of Polish material in the United States.

Wojcicki was named #1 on Vanity Fair’s New Establishment list in 2019.