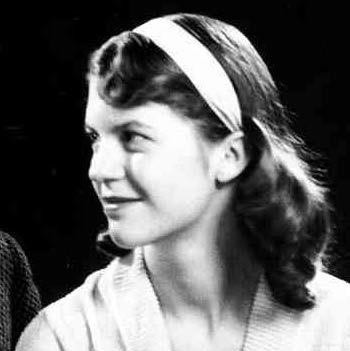 Sylvia Plath (October 27, 1932 – February 11, 1963) was an American poet, novelist, and short-story writer. She is credited with advancing the genre of confessional poetry and is best known for two of her published collections, The Colossus and Other Poems and Ariel, as well as The Bell Jar, a semi-autobiographical novel published shortly before her death. In 1981 The Collected Poems were published, including many previously unpublished works. For this collection Plath was awarded a posthumous Pulitzer Prize in Poetry in 1982, making her the first to receive this honour posthumously.

Born in Boston, Massachusetts, Plath studied at Smith College in Massachusetts and at Newnham College in Cambridge, England. She married fellow poet Ted Hughes in 1956, and they lived together in the United States and then in England. They had two children before separating in 1962.

Plath was clinically depressed for most of her adult life, and was treated multiple times with electroconvulsive therapy (ECT). She died by suicide in 1963.

Sylvia Plath was born on October 27, 1932, in Boston, Massachusetts. Her mother, Aurelia Schober Plath (1906–1994), was a second-generation American of Austrian descent, and her father, Otto Plath (1885–1940), was from Grabow, Germany. Plath’s father was an entomologist and a professor of biology at Boston University who authored a book about bumblebees.

On April 27, 1935, Plath’s brother Warren was born, and in 1936 the family moved from 24 Prince Street in Jamaica Plain, Massachusetts, to 92 Johnson Avenue, Winthrop, Massachusetts. Plath’s mother, Aurelia, had grown up in Winthrop, and her maternal grandparents, the Schobers, had lived in a section of the town called Point Shirley, a location mentioned in Plath’s poetry. While living in Winthrop, eight-year-old Plath published her first poem in the Boston Herald’s children’s section. Over the next few years, Plath published multiple poems in regional magazines and newspapers. At age 11, Plath began keeping a journal. In addition to writing, she showed early promise as an artist, winning an award for her paintings from the Scholastic Art & Writing Awards in 1947. “Even in her youth, Plath was ambitiously driven to succeed”. Plath also had an IQ of around 160.

Otto Plath died on November 5, 1940, a week and a half after Plath’s eighth birthday, of complications following the amputation of a foot due to untreated diabetes. He had become ill shortly after a close friend died of lung cancer. Comparing the similarities between his friend’s symptoms and his own, Otto became convinced that he, too, had lung cancer and did not seek treatment until his diabetes had progressed too far. Raised as a Unitarian, Plath experienced a loss of faith after her father’s death and remained ambivalent about religion throughout her life. Her father was buried in Winthrop Cemetery, in Massachusetts. A visit to her father’s grave later prompted Plath to write the poem “Electra on Azalea Path”. After Otto’s death, Aurelia moved her children and her parents to 26 Elmwood Road, Wellesley, Massachusetts in 1942. In one of her last prose pieces, Plath commented that her first nine years “sealed themselves off like a ship in a bottle—beautiful, inaccessible, obsolete, a fine, white flying myth”. Plath attended Bradford Senior High School (now Wellesley High School) in Wellesley, graduating in 1950. Just after graduating from high school, she had her first national publication in the Christian Science Monitor.

Before her death, Plath tried several times to take her own life. On August 24, 1953, Plath overdosed on pills in the cellar of her mother’s home. In June 1962, Plath drove her car off the side of the road, into a river, which she later said was an attempt to take her own life.

In January 1963, Plath spoke with John Horder, her general practitioner and a close friend who lived near her. She described the current depressive episode she was experiencing; it had been ongoing for six or seven months. While for most of the time she had been able to continue working, her depression had worsened and become severe, “marked by constant agitation, suicidal thoughts and inability to cope with daily life.” Plath struggled with insomnia, taking medication at night to induce sleep, and frequently woke up early. She lost 20 pounds. However, she continued to take care of her physical appearance and did not outwardly speak of feeling guilty or unworthy.

Horder prescribed her an anti-depressant, a monoamine oxidase inhibitor, a few days before her suicide. Knowing she was at risk alone with two young children, he says he visited her daily and made strenuous efforts to have her admitted to a hospital; when that failed, he arranged for a live-in nurse. Commentators have argued that because anti-depressants may take up to three weeks to take effect, her prescription from Horder would not have taken full effect.

The nurse was due to arrive at nine on the morning of February 11, 1963, to help Plath with the care of her children. Upon arrival, she could not get into the flat but eventually gained access with the help of a workman, Charles Langridge. They found Plath dead of carbon monoxide poisoning with her head in the oven, having sealed the rooms between her and her sleeping children with tape, towels and cloths. At approximately 4:30 a.m. Plath had placed her head in the oven, with the gas turned on. She was 30 years old.

Some have suggested that Plath had not intended to kill herself. That morning, she asked her downstairs neighbor, a Mr. Thomas, what time he would be leaving. She also left a note reading “Call Dr. Horder,” including the doctor’s phone number. Therefore, it is argued Plath turned on the gas at a time when Thomas would have been able to see the note. However, in her biography Giving Up: The Last Days of Sylvia Plath, Plath’s best friend, Jillian Becker, wrote, “According to Mr. Goodchild, a police officer attached to the coroner’s office, [Plath] had thrust her head far into the gas oven and had really meant to die.” Horder also believed her intention was clear. He stated that “No one who saw the care with which the kitchen was prepared could have interpreted her action as anything but an irrational compulsion.” Plath had described the quality of her despair as “owl’s talons clenching my heart.” In his 1971 book on suicide, friend and critic Al Alvarez claimed that Plath’s suicide was an unanswered cry for help, and spoke, in a BBC interview in March 2000, about his failure to recognize Plath’s depression, saying he regretted his inability to offer her emotional support: “I failed her on that level. I was thirty years old and stupid. What did I know about chronic clinical depression? She kind of needed someone to take care of her. And that was not something I could do.”