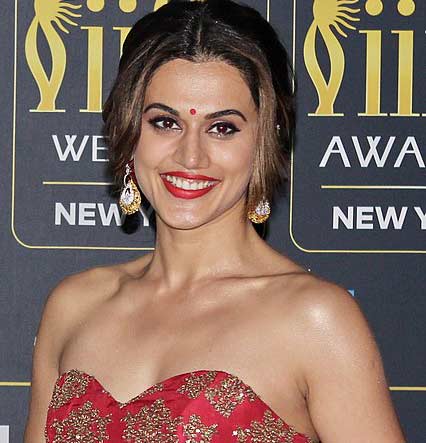 Taapsee Pannu (born 1 August 1987) is an Indian actress who works primarily in Hindi, Telugu and Tamil-language films. Her accolades include a Filmfare Award and she has appeared in Forbes India’s Celebrity 100 list since 2018.

Pannu made her acting debut with the 2010 Telugu film Jhummandi Naadam and then starred in the 2011 films Aadukalam, Vastadu Naa Raju and Mr. Perfect. In 2013, she appeared in the Tamil film Arrambam and made her Hindi film debut with the successful comedy Chashme Baddoor. She went on to star in several commercially successful Hindi films, including the courtroom drama Pink (2016), the war drama The Ghazi Attack (2017), the action comedy Judwaa 2 (2017), the mystery thriller Badla (2019) and the space drama Mission Mangal (2019). For portraying the septuagenarian sharpshooter Prakashi Tomar in the biopic Saand Ki Aankh (2019), she won the Filmfare Critics Award for Best Actress.

When asked in January 2015 about her personal relationships, Taapsee said: “I have dated a South Indian. Also I have never dated a star and will never date one and that I can write and give you on a stamp paper. I am clear that there can be only one star in the relationship and that’s me. I personally don’t think it can work out between an actor and an actress.” Taapsee believes in the philosophy of “If you got it, you flaunt it”. Taapsee is said to be dating badminton player Mathias Boe.