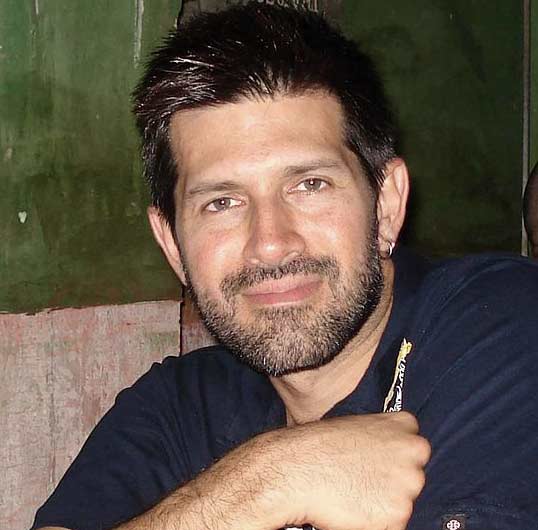 Tapu Javeri (Urdu: ٹپو جویری; born Mustapha Farabi Javeri on 5 May 1965) is a Pakistani fashion and art photographer, radio host and jewellery designer. He works as a freelance photographer and was the photo editor of the Xtra magazine. He designs handbags, T-shirts and scarves for his label “Tapulicious”. He has also designed T-shirts for the Pakistani fashion designer Maheen Khan’s label “Gulabo”.

Javeri is the son of jeweller Hassan Ali Mohammad Javeri and Ayesha Javeri. He has four siblings; one of them being Rabiya Javeri Agha, a high-ranking civil servant. He went to Karachi Grammar School for his early education and then to Bard College, New York City, to study Anthropology. After that he went to Athens for his Masters in Archeology and returned to Pakistan after the internship.

Javeri (from the family that lent its name to Mumbai’s Zaveri Bazar) traces his roots back to Jamnagar, Gujarat, where his ancestors were court jewellers to the Nawabs of Kutch.

At the age of 9, Javeri’s first photograph was published in Dawn, a leading Pakistani newspaper. He then worked for magazines like Teenager, Libas, Fashion Collection, Newsline, Gallerie (India), Visage and Herald. He became Photo-editor for the Pakistani fashion magazine Xtra in 1994 .

Javeri has been described as a “pioneer” of photography and painting in Pakistan. He uses photo montage, combining paints and photographs. Predominant colours are blues and browns. He has participated in group shows of paintings and photographs. His first solo show of artworks was held at Indus Gallery in 1997. Art Gallery in Islamabad held a solo show of his paintings. Javeri has exhibited at 50 group shows and 10 solo exhibitions. These include Where three dreams cross at Whitechapel Gallery, London and KaraChakra and KolachiScope in Karachi.

He has developed a tee shirt range known as “Tapu’s Tees”, and also produced a photo-video montage depicting Karachi with Karachakra and Kolachiscope techniques.

Javeri is the brand ambassador of Pond’s and Sony Ericsson phones.

Javeri was the judge for the British Council Pakistan’s 2012 “Dickens and the City” competition.

Javeri is also one of the judges for Veet Miss Super Model Contest Season 3.

His “Tapulicious” line is an evolution of photo-manipulations, taking inspiration from the streets, but creating wearable art. Javeri uses his photographs of Pakistan to create both prints and bags from the images. The “Tapulicious” bags were showcased in Fashion Pakistan Week 3 in April 2012 in Karachi. The handbags collection contains faces of different famous fashion personalities against the muted backdrop of Karachi’s landmarks and truck art.

In June 2012 Intel announced the latest range of the laptops a.k.a. Ultrabook and stated that Javeri has launched colourful Ultrabook sleeves which portray the vibrant Pakistani culture.

In September 2013, Javeri was amongst Pakistani fashion designers to showcase his collection of Digital Prints and Handbags in the 8th Annual Expo Pakistan 2013 organized by Trade Development Authority of Pakistan (TDAP).