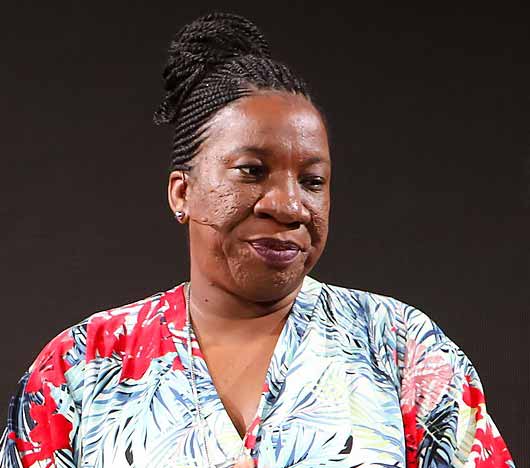 Known for: Founder, Me Too movement

Tarana Burke (born September 12, 1973) is an American activist from The Bronx, New York who started the Me Too movement. In 2006, Burke began using metoo to help other women with similar experiences to stand up for themselves. Over a decade later, in 2017 #MeToo became a viral hashtag popularized by Alyssa Milano when women began using it to tweet about the Harvey Weinstein sexual abuse allegations. The phrase and hashtag quickly developed into a broad-based, and eventually international movement.

Time named Burke, among a group of other prominent activists dubbed “the silence breakers”, as the Time Person of the Year for 2017. Burke presents at public speaking events across the country and is currently Senior Director at Girls for Gender Equity in Brooklyn.

Burke was born in The Bronx, New York, and raised in the area. She grew up in a low-income, working-class family in a housing project and was raped and sexually assaulted both as a child and a teenager. Her mother supported her recovery from these violent acts and encouraged her to be involved in the community. In her biography Burke states that these experiences inspired her to work to improve the lives of girls who undergo extreme hardships. As a teenager, she became involved in working to improve the lives of young girls living in marginalized communities. Burke attended Alabama State University then transferred and graduated from Auburn University. During her time in college, she organized press conferences and protests regarding economic and racial justice.

An activist since 1989, Burke moved to Selma, Alabama in the late 1990s after graduating college.

After working with survivors of sexual violence, Burke developed the nonprofit “Just Be” in 2003, which was an all-girls program for black girls aged 12 to 18. In 2006, Burke founded the Me Too movement and began using the phrase “Me Too” to raise awareness of the pervasiveness of sexual abuse and assault in society.

In 2008, she moved to Philadelphia and worked at Art Sanctuary Philadelphia and other non-profits. She was a consultant for the 2014 Hollywood movie Selma, based on the 1965 Selma to Montgomery voting rights marches led by James Bevel, Hosea Williams, Martin Luther King, Jr. and John Lewis.

The phrase “Me Too” developed into a broader movement following the 2017 use of #MeToo as a hashtag after the Harvey Weinstein sexual abuse allegations. On October 15, 2017, Burke was notified by her friends that the MeToo hashtag was being used online. Burke decided to be in service and shape the movement to make it about “empowermental empathy”. Time named Burke, among a group of other prominent female activists dubbed “the silence breakers”, as the Time Person of the Year for 2017.

In 2018, she attended the 75th Golden Globe Awards as a guest of American actor Michelle Williams. Burke received the 2018 Prize for Courage from The Ridenhour Prizes, which is awarded to individuals who demonstrate courageous defense of the public interest and passionate commitment to social justice, for popularizing the phrase “me too” as a way to empathize with sexual assault survivors more than a decade ago. Burke is currently Senior Director at Girls for Gender Equity. Burke organizes workshops to help improve policies at schools, workplaces, and places of worship, and focuses on helping victims not blame themselves for sexual violence. Burke attends public speaking events across the country.

Burke is the Senior Director of Girls for Gender Equity in Brooklyn, which strives to help young women of color increase their overall development through various programs and classes.

In 1997, Burke met a girl named Heaven in Alabama who told her about being sexually abused by her mother’s boyfriend. She says she didn’t know what to say, and never saw the girl again. She says she wished she had said “me too.” Burke has said she came to believe girls needed “different attention” than their male peers. This and other incidents led Burke to found Just Be Inc., an organization that promotes the wellness of young female minorities aged 12–18. In 2006, she made a Myspace page. Just Be Inc. received its first grant in 2007.

In 2006, Burke founded the Me Too movement and began using the phrase “Me Too” to raise awareness of the pervasiveness of sexual abuse and assault in society.

The phrase “Me Too” developed into a broader movement following the 2017 use of #MeToo as a hashtag following the Harvey Weinstein sexual abuse allegations. In October 2017, actress Alyssa Milano encouraged women to say “Me Too” if they’ve experienced sexual harassment or assault, and the hashtag became popular. Milano quickly acknowledged Burke’s earlier use of the phrase on Twitter, writing “I was just made aware of an earlier #MeToo movement, and the origin story is equal parts heartbreaking and inspiring”. Burke has been supportive of the #MeToo hashtag.
Time named Burke, among a group of other prominent activist women dubbed “the silence breakers”, as the Time Person of the Year for 2017. Her speaking engagements have included Brown University in February 2018.