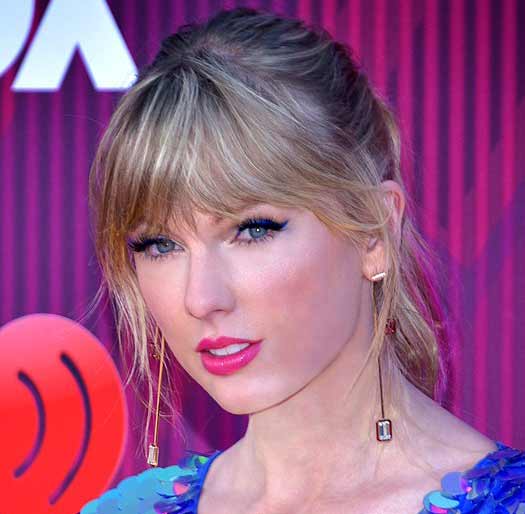 Taylor Alison Swift (born December 13, 1989) is an American singer-songwriter. Her narrative songwriting, which often centers around her personal life, has received widespread critical praise and media coverage. Born in West Reading, Pennsylvania, Swift relocated to Nashville, Tennessee in 2004 to pursue a career in music. At age 14, she became the youngest artist signed by the Sony/ATV Music publishing house and, at age 15, she signed her first record deal. Her 2006 eponymous debut studio album was the longest-charting album of the 2000s on the Billboard 200. Its third single, “Our Song”, made her the youngest person to single-handedly write and perform a number-one song on the Billboard Country Airplay chart. Swift’s breakthrough second studio album, Fearless (2008), won four Grammy Awards—including Album of the Year—and produced the pop-crossover singles “Love Story” and “You Belong with Me”. It became the best-selling album of 2009 in the United States and was certified Diamond by the RIAA.

Swift’s self-written third studio album, Speak Now (2010), was her first to debut with over a million copies sold and won two Grammy Awards, while her cross-genre fourth studio album, Red (2012), earned Swift her first Billboard Hot 100 number-one single, “We Are Never Ever Getting Back Together”. Her fifth studio album and first all-pop project, 1989 (2014), produced the number-one singles “Shake It Off”, “Blank Space” and “Bad Blood”, made Swift the first woman to succeed herself at the top of the Hot 100 and won three Grammy Awards, with Swift becoming the first woman to win Album of the Year twice as lead artist. Her hip hop-influenced sixth studio album, Reputation (2017), made her the only act to have four albums each debut with over a million copies sold in the U.S. and generated her fifth Hot 100 number-one single, “Look What You Made Me Do”. Her seventh studio album, Lover (2019), broke the record for the most simultaneous Hot 100 entries by a female artist and became the global best-selling studio album of 2019. Folklore (2020), her eighth studio album, was a surprise release and received critical acclaim for its indie folk and alternative rock production.

Having sold more than 50 million albums and 150 million singles globally, Swift is one of the world’s best-selling music artists. Her accolades include 10 Grammy Awards, an Emmy Award, and seven Guinness World Records; she is the most-awarded act and woman at the American Music Awards (29 wins) and Billboard Music Awards (23 wins), respectively. She has been included in multiple power rankings, such as Time’s annual list of the 100 most influential people in the world (2010, 2015 and 2019), Rolling Stone’s 100 Greatest Songwriters of All Time (2015), the Forbes Celebrity 100 (placing first in 2016 and 2019), and Billboard’s Greatest of All Time Artists Chart (placing eighth). She was named Global Recording Artist of the Year twice by the International Federation of the Phonographic Industry (2014 and 2019), Woman of the Decade (2010s) by Billboard and the Artist of the Decade (2010s) by the American Music Awards.

Taylor Alison Swift was born on December 13, 1989, in West Reading, Pennsylvania. Her father, Scott Kingsley Swift, is a former stockbroker for Merrill Lynch; her mother, Andrea Gardner Swift (née Finlay), is a former homemaker who previously worked as a mutual fund marketing executive. Swift, who said she has Scottish heritage, was named after the singer-songwriter James Taylor. Her younger brother, Austin Kingsley Swift, is an actor. Swift spent her early years on a Christmas tree farm that her father purchased from one of his clients. Swift identifies as Christian. She attended preschool and kindergarten at the Alvernia Montessori School, run by the Bernadine Franciscan sisters, before transferring to The Wyndcroft School. The family moved to a rented house in the suburban town of Wyomissing, Pennsylvania, where she attended Wyomissing Area Junior/Senior High School.

At age nine, Swift became interested in musical theater and performed in four Berks Youth Theatre Academy productions. She also traveled regularly to New York City for vocal and acting lessons. Swift later shifted her focus toward country music, inspired by Shania Twain’s songs, which made her “want to just run around the block four times and daydream about everything.” She spent weekends performing at local festivals and events. After watching a documentary about Faith Hill, Swift felt sure she needed to move to Nashville, Tennessee, to pursue a career in music. She traveled with her mother at age eleven to visit Nashville record labels and submitted demo tapes of Dolly Parton and Dixie Chicks karaoke covers. She was rejected, however, because “everyone in that town wanted to do what I wanted to do. So, I kept thinking to myself, I need to figure out a way to be different.”

When Swift was around 12 years old, computer repairman and local musician Ronnie Cremer taught her to play guitar. He helped with her first efforts as a songwriter, leading her to write “Lucky You”. In 2003, Swift and her parents started working with New York-based talent manager Dan Dymtrow. With his help, Swift modeled for Abercrombie & Fitch as part of their “Rising Stars” campaign, had an original song included on a Maybelline compilation CD, and attended meetings with major record labels. After performing original songs at an RCA Records showcase, Swift was given an artist development deal and began making frequent trips to Nashville with her mother.

To help Swift break into country music, her father transferred to Merrill Lynch’s Nashville office when she was 14 years old, and the family relocated to a lakefront house in Hendersonville, Tennessee. Swift attended Hendersonville High School but transferred to the Aaron Academy after two years, which could better accommodate her touring schedule through homeschooling; she graduated a year early.

Swift’s personal life is the subject of widespread media attention. In 2013, Abercrombie & Fitch marketed a slogan T-shirt with a “slut-shaming” remark directed toward her. The New York Times asserted in 2013 that her “dating history has begun to stir what feels like the beginning of a backlash”. They questioned whether Swift was in the midst of a “quarter-life crisis”. Swift has said she is unwilling to discuss her personal life in public; she believes that talking about it can be “a career weakness”. In 2015, singer Ray Stevens released his album Here We Go Again which included the single “Taylor Swift is Stalking Me”. In 2020, Swift revealed she struggled with an eating disorder in the past.

Rolling Stone remarks upon her polite manner: “If this is Swift’s game face, it must be tattooed on because it never drops”, and noted her “ease with glad-handing”. The Hollywood Reporter described Swift as “the Best People Person since Bill Clinton”. While presenting Swift with an award for her humanitarian endeavors in 2012, Michelle Obama described her as a singer who “has rocketed to the top of the music industry but still keeps her feet on the ground, someone who has shattered every expectation of what a 22-year-old can accomplish”. Swift considers Michelle Obama to be a role model. According to The New York Times and marketing executive Matt B. Britton, Swift’s business savvy has helped her “excel as an authentic personality who establishes direct connections with her audience”, “touch as many people as possible”, and “generate a kind of advocacy and excitement that no level of advertising could”.

Swift is one of the most-followed people on social media; as of July 2020, she has over 136 million followers on Instagram, 86.5 million followers on Twitter and 38.5 million subscribers on YouTube. She is known for her friendly online interactions with her fans. She has delivered holiday gifts to fans by mail and in person, an event dubbed “Swiftmas”, and considers it her “responsibility” to be conscious of her influence on young fans. She has called her fans “the longest and best relationship” she has ever had. Often labeled by media as “America’s Sweetheart” due to her down-to-earth personality and girl-next-door image, Swift insists she does not “live by all these rigid, weird rules that make me feel all fenced in. I just like the way that I feel like, and that makes me feel very free”. She refuses to take part in overly-sexualized photo shoots, although Bloomberg L.P. views her as a sex symbol. She has also been recognized as a style icon in fashion; Vogue named her an Icon of American Style in 2011. In 2014, she topped People’s annual best-dressed list. In 2015, she was named Woman of the Year at the Elle Style Awards and ranked first on Maxim’s Hot 100 list.

Swift has received many awards and honors, including 10 Grammy Awards, 29 American Music Awards (most wins by an artist), 23 Billboard Music Awards (most wins by a female artist), seven Guinness World Records, 12 Country Music Association Awards (including the prestigious Pinnacle Award), eight Academy of Country Music Awards, one Brit Award, and one Emmy Award. As a songwriter, she has been honored by the Nashville Songwriters Association and the Songwriters Hall of Fame, and was the youngest person included on Rolling Stone’s list of the 100 Greatest Songwriters of All Time in 2015. In 2019, Billboard placed Swift eighth on its Greatest of All Time Artists Chart; she was the highest-ranking artist on the list who debuted in the 21st century, and the only artist in the top-ten from that century. In 2020, Swift achieved the most day-one streams of an album on Spotify by a female artist after Folklore was streamed 80.6 million times.

Swift is one of the best-selling music artists of all time. She has sold over 50 million pure albums to-date, including 37.3 million in the U.S., and 150 million singles worldwide. Worldwide, she is one of the top five artists in terms of digital sales, and has accumulated over 97 million units in album consumption and 54 billion streams across all platforms. Swift’s first five studio albums have each sold over four million copies in the U.S. alone.[441] She is the first artist to have four studio albums sell one million copies in their first week in the U.S. and the third best-selling digital singles artist in the U.S. thus far, with a total of 120 million equivalent units certified by the Recording Industry Association of America (RIAA). She was the highest-paid female musician of the 2010s, placing second on Forbes’s list of Top-Earning Musicians of the Decade with earnings of $825 million. In 2020, she became the first female artist in the U.S. to have both an album (Fearless) and a song (“Shake It Off”) be certified diamond by the RIAA. Swift is also a highly successful touring artist, having broken numerous venue attendance and grossing records throughout her career. Her Reputation Stadium Tour became the highest-grossing U.S. tour in history, and she was the top female touring artist of the 2010s.