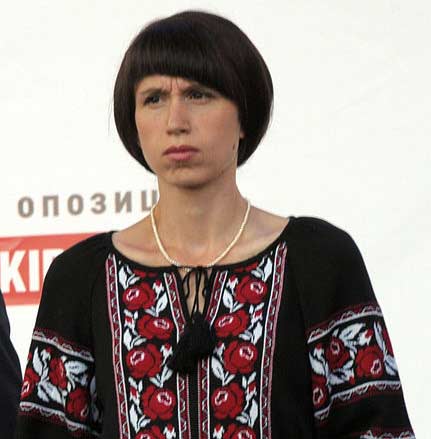 Tetiana Mykolayivna Chornovol (Ukrainian: Тетя́на Микола́ївна Чорново́л; born 4 June 1979 in Kiev, Ukrainian SSR, Soviet Union) is a Ukrainian journalist and civic activist, and one of the leaders in the Euromaidan protest campaign. She is known for investigative reports about corruption in Ukraine, as well as for her adventurous direct actions. In 2014, she was elected to the Verkhovna Rada.

On 25 December 2013, Chornovol was the victim of a much published and condemned severe beating.

Chornovol has been employed by or freelanced for many Ukrainian publications focusing on politics and corruption in Ukraine. She also reported from post-Soviet armed conflicts in which UNA-UNSO volunteers participated.

Investigative career
In 2004, she began specializing in investigative journalism, contributing to several Ukrainian online newspapers, including Ukrayinska Pravda, Levyi Bereg and Obozrevatel. Her focus topics are suspicious personal wealth of Ukrainian politicians, public servants, and businessmen, as well as their involvement in crime.

In 2008, a judgment was obtained from the High Court of Justice in London after Obozrevatel refused to retract false and libelous statements in articles by Chornovol alleging that Rinat Akhmetov was connected to criminal activity and violence. Chornovol had interviewed his former classmates and neighbors, and delved into his early years. Following court pressure, Obozrevatel issued an official apology stating, “The editorial hereby admits that there was unchecked and false information about Rinat Akhmetov present in the … articles … We hereby give our apologies to Rinat Akhmetov for the problems resulting from the above-mentioned publications.” Chornovol refused to issue an apology or acknowledge any wrongdoing. Obozrevatel said it was not invited or informed of the date of the court hearing, and claimed that the decisions of British judges are not legitimate in Ukraine.

Other articles by Chornovol addressed the alleged organized crime background of then-President Viktor Yanukovych and reported on his lavish countryside property. According to a story in the New York Times, in August 2012 Chornovol “scaled the walls of Mr. Yanukovych’s then residential compound, which includes 345 acres of forested hills along the Dnieper River and is called ‘Mezhyhirya’ after the park where it is situated, and spent nearly three hours wandering the property and taking photographs before being detained by security”. Chornovol was the first investigative journalist researching Mezhyhirya; she started work on the topic in 2006.

Recent investigations
Immediately before the attack on her, Chornovol made an on-site investigation of the suburban alleged property of Ukraine’s Internal Affairs Minister (police chief) Vitaliy Zakharchenko and published a blog report with photos ) as well as those allegedly belonging to the country’s General Prosecutor Viktor Pshonka. The material was mentioned in her conversations with editors and colleagues.

Reacting to Chornovol’s 25 December 2013 beating, Ukrayinska Pravda and Chornovol’s husband announced that they “suspected each and every person whom Tetiana Chornovol wrote about” personally, including President Yanukovych, in “ordering that attack”, until proven otherwise.

In 2014 Foreign Policy magazine included Chornovol into top 100 thinkers – people who changed the world. She was awarded in the nomination “Those who defy” for her fight against the Yanukovych regime and corruption.

In 2015, she became the protagonist of the documentary “Breaking Point: The War for Democracy in Ukraine” directed by Mark Jonathan Harris and Oles Sanin. The film is about the way Ukrainians behaved during the 2014 Ukrainian revolution and Russian military aggression.

Chornovol is a widowed mother of two. Her husband, Mykola Berezovyi, a volunteer fighter in the Azov Battalion, was killed on 10 August 2014 during the fighting in eastern Ukraine. Chornovol and her husband met at a political rally. Their younger child was born in October 2010.