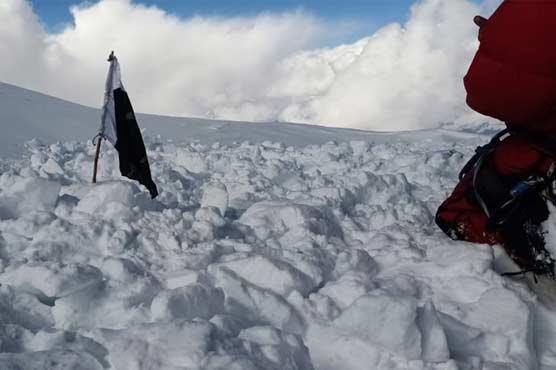 Skardu: The body of Pakistan’s famous hero Ali Sadpara has been laid to rest on the world’s highest peak K2.

This was confirmed by the son of the late climber via the social networking site Twitter. Sajid Sadpara said,

“I have temporarily buried my father’s body in the snow at K2 Camp Four so that the body can be protected from avalanches.”

Sajid Sadpara said that a climber from Argentina helped me a lot in this important mission. He brought with me the corpse of Ali Sadpara Khaki from the very height of Bottle Neck to Camp Four.

After burying his father’s body in trust, I hoisted the Pakistani flag on it to mark his grave while reciting the Holy Quran and praying for his reward on behalf of the entire nation.

On the other hand, according to Dunya News, Sajid Sadpara has said in a statement that the help of at least 10 to 15 climbers is needed to bring down the body of Ali Sadpara from K2 Camp Four.

I have secured body of our hero at C-4. An Argentinian climber has been a great help in bringing body above bottleneck till C-4. I offered Fatih & recited Holy Quran on behalf of whole nation #MissionSadpara #K2Search
Secured place with Pakistan flag 🇵🇰 #SonofPakistan pic.twitter.com/9IdzXV4zDx

If the government cooperates, the services of local climbers and Nepali Sherpas on K2 can be hired for the rescue. The rescue mission must be completed before August 10 because of the severe weather conditions. Rescue operations will not be possible on the two.

He said that expert opinion has been sought from many local and foreign climbers for the rescue while the Pakistan Army has also been asked to help in taking the body of the father home. Hope for the success of the mission with the prayers of the nation and the cooperation of the government.

Camp-4 K-2
Sajid has single handedly retrieved the body from above bottleneck, carried down to C-4 and have secured the body there. He has offered fatih & recited verses of Holy Quran as per Islamic rituals and acc to wishes of his mother #RIPAliSadpara #MissionSadpara pic.twitter.com/Y4HKVdTl5F