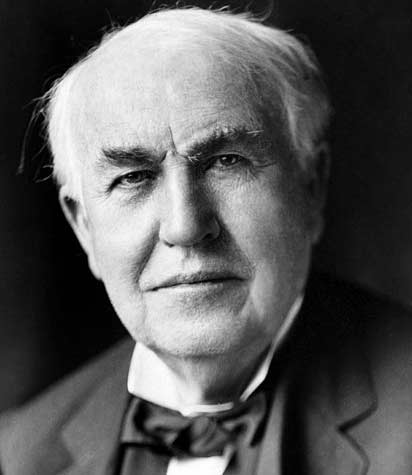 Thomas Alva Edison (February 11, 1847 – October 18, 1931) was an American inventor and businessman who has been described as America’s greatest inventor. He developed many devices in fields such as electric power generation, mass communication, sound recording, and motion pictures. These inventions, which include the phonograph, the motion picture camera, and early versions of the electric light bulb, have had a widespread impact on the modern industrialized world. He was one of the first inventors to apply the principles of organized science and teamwork to the process of invention, working with many researchers and employees. He established the first industrial research laboratory.

Edison was raised in the American Midwest; early in his career he worked as a telegraph operator, which inspired some of his earliest inventions. In 1876, he established his first laboratory facility in Menlo Park, New Jersey, where many of his early inventions were developed. He later established a botanic laboratory in Fort Myers, Florida in collaboration with businessmen Henry Ford and Harvey S. Firestone, and a laboratory in West Orange, New Jersey that featured the world’s first film studio, the Black Maria. He was a prolific inventor, holding 1,093 US patents in his name, as well as patents in other countries. Edison married twice and fathered six children. He died in 1931 of complications of diabetes.

Thomas Edison was born in 1847 in Milan, Ohio, but grew up in Port Huron, Michigan after the family moved there in 1854. He was the seventh and last child of Samuel Ogden Edison Jr. (1804–1896, born in Marshalltown, Nova Scotia) and Nancy Matthews Elliott (1810–1871, born in Chenango County, New York). His patrilineal family line was Dutch by way of New Jersey; the surname had originally been “Edeson.”

Edison was taught reading, writing, and arithmetic by his mother who used to be a school teacher. He attended school for only a few months. However, one biographer described him as a very curious child who learned most things by reading on his own. As a child, he became fascinated with technology and spent hours working on experiments at home. In 1875, at age 28, he enrolled in a four year chemistry course at The Cooper Union for the Advancement of Science and Art.

Edison developed hearing problems at the age of 12. The cause of his deafness has been attributed to a bout of scarlet fever during childhood and recurring untreated middle-ear infections. He subsequently concocted elaborate fictitious stories about the cause of his deafness. Being completely deaf in one ear and barely hearing in the other, it is alleged that Edison would listen to a music player or piano by clamping his teeth into the wood to absorb the sound waves into his skull. As he got older, Edison believed his hearing loss allowed him to avoid distraction and concentrate more easily on his work. Modern-day historians and medical professionals have suggested he may have had ADHD.

Thomas Edison began his career selling candy, newspapers and vegetables on the trains running from Port Huron to Detroit. He turned a $50 a week profit by age 13, most of which went to buying equipment for electric and chemical experiments. He became a telegraph operator after he saved three-year-old Jimmie MacKenzie from being struck by a runaway train. Jimmie’s father, station agent J. U. MacKenzie of Mount Clemens, Michigan, was so grateful that he trained Edison as a telegraph operator. Edison’s first telegraphy job away from Port Huron was at Stratford Junction, Ontario, on the Grand Trunk Railway. He was held responsible for a near collision. He also studied qualitative analysis and conducted chemical experiments on the train until he left the job.

Edison obtained the exclusive right to sell newspapers on the road, and, with the aid of four assistants, he set in type and printed the Grand Trunk Herald, which he sold with his other papers. This began Edison’s long streak of entrepreneurial ventures, as he discovered his talents as a businessman. These talents eventually led him to found 14 companies, including General Electric, still one of the largest publicly traded companies in the world.

In 1866, at the age of 19, Edison moved to Louisville, Kentucky, where, as an employee of Western Union, he worked the Associated Press bureau news wire. Edison requested the night shift, which allowed him plenty of time to spend at his two favorite pastimes—reading and experimenting. Eventually, the latter pre-occupation cost him his job. One night in 1867, he was working with a lead–acid battery when he spilled sulfuric acid onto the floor. It ran between the floorboards and onto his boss’s desk below. The next morning Edison was fired.

His first patent was for the electric vote recorder, U.S. Patent 90,646, which was granted on June 1, 1869. Finding little demand for the machine, Edison moved to New York City shortly thereafter. One of his mentors during those early years was a fellow telegrapher and inventor named Franklin Leonard Pope, who allowed the impoverished youth to live and work in the basement of his Elizabeth, New Jersey, home, while Edison worked for Samuel Laws at the Gold Indicator Company. Pope and Edison founded their own company in October 1869, working as electrical engineers and inventors. Edison began developing a multiplex telegraphic system, which could send two messages simultaneously, in 1874.

Henry Ford, the automobile magnate, later lived a few hundred feet away from Edison at his winter retreat in Fort Myers. Ford once worked as an engineer for the Edison Illuminating Company of Detroit and met Edison at a convention of affiliated Edison illuminating companies in Brooklyn, NY in 1896. Edison was impressed with Ford’s internal combustion engine automobile and encouraged its developments. They were friends until Edison’s death. Edison and Ford undertook annual motor camping trips from 1914 to 1924. Harvey Firestone and naturalist John Burroughs also participated.

In 1928, Edison joined the Fort Myers Civitan Club. He believed strongly in the organization, writing that “The Civitan Club is doing things—big things—for the community, state, and nation, and I certainly consider it an honor to be numbered in its ranks.” He was an active member in the club until his death, sometimes bringing Henry Ford to the club’s meetings.

Edison was active in business right up to the end. Just months before his death, the Lackawanna Railroad inaugurated suburban electric train service from Hoboken to Montclair, Dover, and Gladstone, New Jersey. Electrical transmission for this service was by means of an overhead catenary system using direct current, which Edison had championed. Despite his frail condition, Edison was at the throttle of the first electric MU (Multiple-Unit) train to depart Lackawanna Terminal in Hoboken in September 1930, driving the train the first mile through Hoboken yard on its way to South Orange.

This fleet of cars would serve commuters in northern New Jersey for the next 54 years until their retirement in 1984. A plaque commemorating Edison’s inaugural ride can be seen today in the waiting room of Lackawanna Terminal in Hoboken, which is presently operated by New Jersey Transit.

Edison was said to have been influenced by a popular fad diet in his last few years; “the only liquid he consumed was a pint of milk every three hours”. He is reported to have believed this diet would restore his health. However, this tale is doubtful. In 1930, the year before Edison died, Mina said in an interview about him, “correct eating is one of his greatest hobbies.” She also said that during one of his periodic “great scientific adventures”, Edison would be up at 7:00, have breakfast at 8:00, and be rarely home for lunch or dinner, implying that he continued to have all three.

Edison became the owner of his Milan, Ohio, birthplace in 1906. On his last visit, in 1923, he was reportedly shocked to find his old home still lit by lamps and candles.

Edison died of complications of diabetes on October 18, 1931, in his home, “Glenmont” in Llewellyn Park in West Orange, New Jersey, which he had purchased in 1886 as a wedding gift for Mina. Rev. Stephen J. Herben officiated at the funeral; Edison is buried behind the home.

Edison’s last breath is reportedly contained in a test tube at The Henry Ford museum near Detroit. Ford reportedly convinced Charles Edison to seal a test tube of air in the inventor’s room shortly after his death, as a memento. A plaster death mask and casts of Edison’s hands were also made. Mina died in 1947.

People who worked for Edison

The following is a list of people who worked for Thomas Edison in his laboratories at Menlo Park or West Orange or at the subsidiary electrical businesses that he supervised.