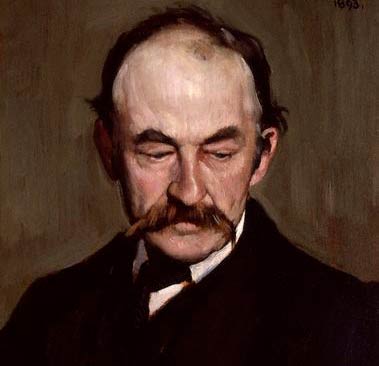 Thomas Hardy OM (2 June 1840 – 11 January 1928) was an English novelist and poet. A Victorian realist in the tradition of George Eliot, he was influenced both in his novels and in his poetry by Romanticism, including the poetry of William Wordsworth. He was highly critical of much in Victorian society, especially on the declining status of rural people in Britain, such as those from his native South West England.

While Hardy wrote poetry throughout his life and regarded himself primarily as a poet, his first collection was not published until 1898. Initially, he gained fame as the author of novels such as Far from the Madding Crowd (1874), The Mayor of Casterbridge (1886), Tess of the d’Urbervilles (1891), and Jude the Obscure (1895). During his lifetime, Hardy’s poetry was acclaimed by younger poets (particularly the Georgians) who viewed him as a mentor. After his death his poems were lauded by Ezra Pound, W. H. Auden and Philip Larkin.

Many of his novels concern tragic characters struggling against their passions and social circumstances, and they are often set in the semi-fictional region of Wessex; initially based on the medieval Anglo-Saxon kingdom, Hardy’s Wessex eventually came to include the counties of Dorset, Wiltshire, Somerset, Devon, Hampshire and much of Berkshire, in southwest and south central England. Two of his novels, Tess of the d’Urbervilles and Far from the Madding Crowd, were listed in the top 50 on the BBC’s survey The Big Read.

Thomas Hardy was born on 2 June 1840 in Higher Bockhampton (then Upper Bockhampton), a hamlet in the parish of Stinsford to the east of Dorchester in Dorset, England, where his father Thomas (1811–1892) worked as a stonemason and local builder, and married his mother Jemima (née Hand; 1813–1904) in Beaminster, towards the end of 1839. Jemima was well-read, and she educated Thomas until he went to his first school at Bockhampton at the age of eight. For several years he attended Mr. Last’s Academy for Young Gentlemen in Dorchester, where he learned Latin and demonstrated academic potential. Because Hardy’s family lacked the means for a university education, his formal education ended at the age of sixteen, when he became apprenticed to James Hicks, a local architect.

Hardy trained as an architect in Dorchester before moving to London in 1862; there he enrolled as a student at King’s College London. He won prizes from the Royal Institute of British Architects and the Architectural Association. He joined Arthur Blomfield’s practice as assistant architect in April 1862 and worked with Blomfield on All Saints’ parish church in Windsor, Berkshire in 1862–64. A reredos, possibly designed by Hardy, was discovered behind panelling at All Saints’ in August 2016. In the mid-1860s, Hardy was in charge of the excavation of part of the graveyard of St Pancras Old Church prior to its destruction when the Midland Railway was extended to a new terminus at St Pancras.

Hardy never felt at home in London, because he was acutely conscious of class divisions and his social inferiority. During this time he became interested in social reform and the works of John Stuart Mill. He was introduced by his Dorset friend Horace Moule to the works of Charles Fourier and Auguste Comte. Mill’s essay On Liberty was one of Hardy’s cures for despair, and in 1924 he declared that “my pages show harmony of view with” Mill. He was also attracted to Matthew Arnold’s and Leslie Stephen’s ideal of the urbane liberal freethinker.

After five years, concerned about his health, he returned to Dorset, settling in Weymouth, and decided to dedicate himself to writing.

Hardy was horrified by the destruction caused by First World War, pondering that “I do not think a world in which such fiendishness is possible to be worth the saving” and “better to let western ‘civilization’ perish, and let the black and yellow races have a chance.” He wrote to John Galsworthy that “the exchange of international thought is the only possible salvation for the world.”

Hardy became ill with pleurisy in December 1927 and died at Max Gate just after 9 pm on 11 January 1928, having dictated his final poem to his wife on his deathbed; the cause of death was cited, on his death certificate, as “cardiac syncope”, with “old age” given as a contributory factor. His funeral was on 16 January at Westminster Abbey, and it proved a controversial occasion because Hardy had wished for his body to be interred at Stinsford in the same grave as his first wife, Emma. His family and friends concurred; however, his executor, Sir Sydney Carlyle Cockerell, insisted that he be placed in the abbey’s famous Poets’ Corner. A compromise was reached whereby his heart was buried at Stinsford with Emma, and his ashes in Poets’ Corner. Hardy’s estate at death was valued at £95,418 (£5791397 in 2015 sterling).

Shortly after Hardy’s death, the executors of his estate burnt his letters and notebooks, but twelve notebooks survived, one of them containing notes and extracts of newspaper stories from the 1820s, and research into these has provided insight into how Hardy used them in his works. In the year of his death Mrs Hardy published The Early Life of Thomas Hardy, 1841–1891, compiled largely from contemporary notes, letters, diaries, and biographical memoranda, as well as from oral information in conversations extending over many years.

Hardy’s work was admired by many younger writers, including D. H. Lawrence, John Cowper Powys, and Virginia Woolf. In his autobiography Goodbye to All That (1929), Robert Graves recalls meeting Hardy in Dorset in the early 1920s and how Hardy received him and his new wife warmly, and was encouraging about his work.

Hardy’s birthplace in Bockhampton and his house Max Gate, both in Dorchester, are owned by the National Trust.

Novels of character and environment