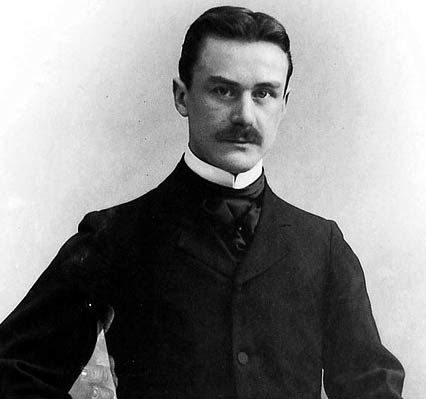 Paul Thomas Mann (6 June 1875 – 12 August 1955) was a German novelist, short story writer, social critic, philanthropist, essayist, and the 1929 Nobel Prize in Literature laureate. His highly symbolic and ironic epic novels and novellas are noted for their insight into the psychology of the artist and the intellectual. His analysis and critique of the European and German soul used modernized versions of German and Biblical stories, as well as the ideas of Johann Wolfgang von Goethe, Friedrich Nietzsche, and Arthur Schopenhauer.

Mann was a member of the Hanseatic Mann family and portrayed his family and class in his first novel, Buddenbrooks. His older brother was the radical writer Heinrich Mann and three of Mann’s six children, Erika Mann, Klaus Mann and Golo Mann, also became significant German writers. When Adolf Hitler came to power in 1933, Mann fled to Switzerland. When World War II broke out in 1939, he moved to the United States, then returned to Switzerland in 1952. Mann is one of the best-known exponents of the so-called Exilliteratur, German literature written in exile by those who opposed the Hitler regime.

Paul Thomas Mann was born to a bourgeois family in Lübeck, the second son of Thomas Johann Heinrich Mann (a senator and a grain merchant) and his wife Júlia da Silva Bruhns, a Brazilian woman of German and Portuguese ancestry, who emigrated to Germany with her family when she was seven years old. His mother was Roman Catholic but Mann was baptised into his father’s Lutheran religion. Mann’s father died in 1891, and after that his trading firm was liquidated. The family subsequently moved to Munich. Mann first studied science at a Lübeck gymnasium (secondary school), then attended the Ludwig Maximillians University of Munich as well as the Technical University of Munich, where, in preparation for a journalism career, he studied history, economics, art history and literature.

Mann lived in Munich from 1891 until 1933, with the exception of a year spent in Palestrina, Italy, with his elder brother, the novelist Heinrich. Thomas worked at the South German Fire Insurance Company in 1894–95. His career as a writer began when he wrote for the magazine Simplicissimus. Mann’s first short story, “Little Mr Friedemann” (Der Kleine Herr Friedemann), was published in 1898.

In 1905, Mann married Katia Pringsheim, who came from a wealthy, secular Jewish industrialist family. She later joined the Lutheran church. The couple had six children.

With the start of the Cold War he was increasingly frustrated by rising McCarthyism. As a ‘suspected communist’, he was required to testify to the House Un-American Activities Committee, where he was termed “one of the world’s foremost apologists for Stalin and company.” He was listed by HUAC as being “affiliated with various peace organizations or Communist fronts.” Being in his own words a non-communist rather than an anti-communist, Mann openly opposed the allegations: “As an American citizen of German birth I finally testify that I am painfully familiar with certain political trends. Spiritual intolerance, political inquisitions, and declining legal security, and all this in the name of an alleged ‘state of emergency.’ … That is how it started in Germany.” As Mann joined protests against the jailing of the Hollywood Ten and the firing of schoolteachers suspected of being Communists, he found “the media had been closed to him”. Finally he was forced to quit his position as Consultant in Germanic Literature at the Library of Congress and in 1952 he returned to Europe, to live in Kilchberg, near Zürich, Switzerland. He never again lived in Germany, though he regularly traveled there. His most important German visit was in 1949, at the 200th birthday of Johann Wolfgang von Goethe, attending celebrations in Frankfurt am Main and Weimar, as a statement that German culture extended beyond the new political borders.

After his 80th birthday, while on vacation, he developed unilateral swelling and pain in his leg. At that time, he was diagnosed with thrombophlebitis by Dr. Mülders from Leiden which was confirmed by Dr. Wilhelm Löffler in Zürich. Soon after, he developed a state of shock (circulatory) much to the surprise of these physicians. In 1955, he died of acute iliac artery dissection in a hospital in Zürich and was buried in Kilchberg. Only after his death, it was found that he had been misdiagnosed. The pathologic diagnosis, made by Christoph Hedinger, showed that he had, instead, a perforated iliac artery aneurysm resulting in a retroperitoneal hematoma, compression and thrombosis of the iliac vein. At that time, lifesaving vascular surgery had not been developed.

Many institutions are named in his honour, for instance the Thomas Mann Gymnasium of Budapest.

The Blood of the Walsungs