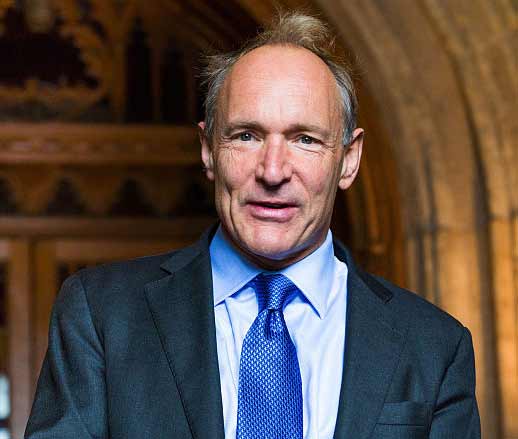 Sir Timothy John Berners-Lee OM KBE FRS FREng FRSA FBCS (born 8 June 1955), also known as TimBL, is an English engineer and computer scientist best known as the inventor of the World Wide Web. He is a Professorial Fellow of Computer Science at the University of Oxford and a professor at the Massachusetts Institute of Technology (MIT). Berners-Lee proposed an information management system on 12 March 1989, then implemented the first successful communication between a Hypertext Transfer Protocol (HTTP) client and server via the internet in mid-November.

Berners-Lee is the director of the World Wide Web Consortium (W3C) which oversees the continued development of the Web. He is also the founder of the World Wide Web Foundation and is a senior researcher and holder of the 3Com founders chair at the MIT Computer Science and Artificial Intelligence Laboratory (CSAIL). He is a director of the Web Science Research Initiative (WSRI) and a member of the advisory board of the MIT Center for Collective Intelligence. In 2011, he was named as a member of the board of trustees of the Ford Foundation. He is a founder and president of the Open Data Institute and is currently an advisor at social network MeWe.

In 2004, Berners-Lee was knighted by Queen Elizabeth II for his pioneering work. In April 2009, he was elected a Foreign Associate of the National Academy of Sciences. He was named in Time magazine’s list of the 100 Most Important People of the 20th century and has received a number of other accolades for his invention. He was honoured as the “Inventor of the World Wide Web” during the 2012 Summer Olympics opening ceremony in which he appeared working with a vintage NeXT Computer at the London Olympic Stadium. He tweeted “This is for everyone” which appeared in LCD lights attached to the chairs of the audience. He received the 2016 Turing Award “for inventing the World Wide Web, the first web browser, and the fundamental protocols and algorithms allowing the Web to scale”.

Berners-Lee was born on 8 June 1955 in London, England, the eldest of the four children of Mary Lee Woods and Conway Berners-Lee; his brother Mike is an expert on greenhouse gases. His parents were computer scientists who worked on the first commercially built computer, the Ferranti Mark 1. He attended Sheen Mount Primary School, and then went on to attend south west London’s Emanuel School from 1969 to 1973, at the time a direct grant grammar school, which became an independent school in 1975. A keen trainspotter as a child, he learnt about electronics from tinkering with a model railway. He studied at The Queen’s College, Oxford, from 1973 to 1976, where he received a first-class bachelor of arts degree in physics. While at university, Berners-Lee made a computer out of an old television set, which he bought from a repair shop.

Berners-Lee has received many awards and honours. He was knighted by Queen Elizabeth II in the 2004 New Year Honours “for services to the global development of the internet”, and was invested formally on 16 July 2004.

On 13 June 2007, he was appointed to the Order of Merit (OM), an order restricted to 24 (living) members. Bestowing membership of the Order of Merit is within the personal purview of the Queen, and does not require recommendation by ministers or the Prime Minister. He was elected a Fellow of the Royal Society (FRS) in 2001. He has been conferred honorary degrees from a number of Universities around the world, including Manchester (his parents worked on the Manchester Mark 1 in the 1940s), Harvard and Yale.

In 2012, Berners-Lee was among the British cultural icons selected by artist Sir Peter Blake to appear in a new version of his most famous artwork – the Beatles’ Sgt. Pepper’s Lonely Hearts Club Band album cover – to celebrate the British cultural figures of his life that he most admires to mark his 80th birthday.

In 2013, he was awarded the inaugural Queen Elizabeth Prize for Engineering. On 4 April 2017, he received the 2016 ACM Turing Award “for inventing the World Wide Web, the first web browser, and the fundamental protocols and algorithms allowing the Web to scale”.

Berners-Lee married Nancy Carlson, an American computer programmer, in 1990. She was also working in Switzerland at the World Health Organization. They had two children and divorced in 2011. In 2014, he married Rosemary Leith at the Chapel Royal, St. James’s Palace in London. Leith is a Canadian internet and banking entrepreneur and a founding director of Berners-Lee’s World Wide Web Foundation. The couple also collaborate on venture capital to support artificial intelligence companies.