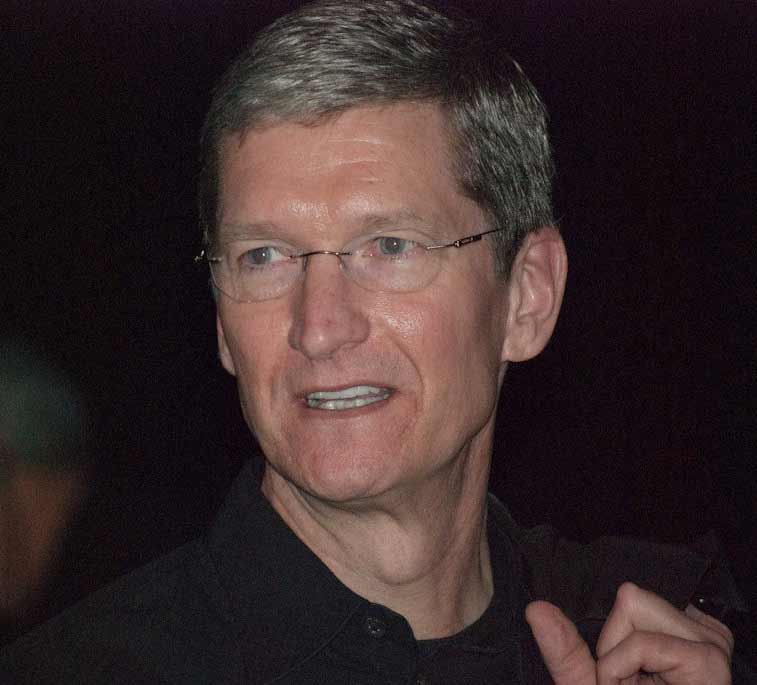 Cook joined Apple in March 1998 as a senior vice president for worldwide operations, and then served as the executive vice president for worldwide sales and operations. He was made the chief executive on August 24, 2011, prior to Jobs’ death in October of that year. During his tenure as the chief executive, he has advocated for the political reformation of international and domestic surveillance, cybersecurity, corporate taxation, American manufacturing, and environmental preservation.

In 2014, Cook became the first chief executive of a Fortune 500 company to publicly come out as gay. Cook also serves on the boards of directors of Nike, Inc., the National Football Foundation, and is a trustee of Duke University. In March 2015, he said he planned to donate his entire stock fortune to charity.

Cook was born in Mobile, Alabama, United States. He was baptized in a Baptist church and grew up in nearby Robertsdale. His father, Donald, was a shipyard worker, and his mother, Geraldine, worked at a pharmacy.

Cook graduated from Robertsdale High School in 1978. He earned a Bachelor of Science (B.S.) in industrial engineering from Auburn University in 1982, and his Master of Business Administration (MBA) from Duke University’s Fuqua School of Business in 1988.

Pre-Apple era
After graduating from Auburn University, Cook spent 12 years in IBM’s personal computer business, ultimately serving as the director of North American fulfillment. It was during this time that Cook also earned his MBA from Duke University, becoming a Fuqua Scholar in 1988. Later, he served as the Chief Operating Officer of the computer reseller division of Intelligent Electronics. In 1997, he became the Vice President for Corporate Materials at Compaq for six months, but left the position after being hired by Steve Jobs.

Any purely rational consideration of cost and benefits lined up in Compaq’s favor, and the people who knew me best advised me to stay at Compaq… On that day in early 1998, I listened to my intuition, not the left side of my brain or for that matter even the people who knew me best… no more than five minutes into my initial interview with Steve, I wanted to throw caution and logic to the wind and join Apple. My intuition already knew that joining Apple was a once in a lifetime opportunity to work for the creative genius and to be on the executive team that could resurrect a great American company.

His first position was Senior Vice President for worldwide operations. Cook closed factories and warehouses, and replaced them with contract manufacturers; this resulted in a reduction of the company’s inventory from months to days. Predicting its importance, his group had invested in long-term deals such as advance investment in flash memory since 2005. This guaranteed a stable supply of what became the iPod Nano, then iPhone and iPad.[citation needed] Competitors at Hewlett-Packard described their canceled HP TouchPad tablet computer and later said that it was made from “cast-off, reject iPad parts”. Cook’s actions were recognized for keeping costs under control and, combined with the rest of the company, generated huge profits.

In January 2007, Cook was promoted to lead operations and served as chief executive in 2009, while Jobs was away on a leave of absence for health related issues. In January 2011, Apple’s board of directors approved a third medical leave of absence requested by Jobs. During that time, Cook was responsible for most of Apple’s day-to-day operations, while Jobs made most major decisions.

Cook is a fitness enthusiast and enjoys hiking, cycling, and going to the gym. He is known for being solitary, using an off-campus fitness center for privacy, and little is publicly shared about his personal life. He explained in October 2014 that he has sought to achieve a “basic level of privacy”.

Cook was misdiagnosed with multiple sclerosis in 1996, an incident he said made him “see the world in a different way”. He has since taken part in charity fundraising, such as cycle races to raise money for the disease. He later told the Auburn alumni magazine that his symptoms came from “lugging a lot of incredibly heavy luggage around”.

Cook has said that in 2009 he offered a portion of his liver to Jobs since they share a rare blood type. Cook said that Jobs responded by yelling, “I’ll never let you do that. I’ll never do that.”

While delivering the 2010 commencement speech at Auburn, Cook emphasized the importance of intuition during significant decision-making processes, and explained that preparation and hard work are also necessary to execute on intuition.

In June 2014, Cook attended San Francisco’s gay pride parade along with a delegation of Apple staff. On October 30, Cook came out as gay in an editorial for Bloomberg Business saying “I’m proud to be gay, and I consider being gay among the greatest gifts God has given me.” He consulted with Anderson Cooper, who had publicly come out himself, on aspects of the statement, and cleared the timing to ensure it would not distract from business interests. Cook had been open about his sexuality “for years” and, while many people at the company were aware of his sexual orientation, he sought to focus on Apple’s products and customers rather than his personal life. He ended his op-ed writing “We pave the sunlit path toward justice together, brick by brick. This is my brick.” Cook became the first and only openly gay CEO on the Fortune 500 list. In September 2015, Cook clarified on The Late Show with Stephen Colbert, “Where I valued my privacy significantly, I felt that I was valuing it too far above what I could do for other people, so I wanted to tell everyone my truth.” In October 2019, he talked about the decision and remarked on how it was thanks to LGBTQ people who had fought for their rights before him that paved the way for his success; and that he needed to let younger generations know that—in a coding analogy—he saw being gay as a feature his life had to offer rather than any problem. He hoped his openness could help LGBTQ youth dealing with homelessness, and suicide hope that their situation could get better.