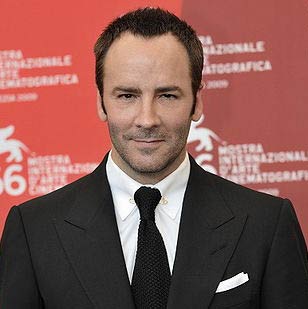 Thomas Carlyle Ford (born August 27, 1961) is an American fashion designer and filmmaker. He launched his eponymous luxury brand in 2006, having previously served as the creative director at Gucci and Yves Saint Laurent. Ford directed the Academy Award-nominated films A Single Man (2009) and Nocturnal Animals (2016). He currently serves as the Chairman of the Board of the Council of Fashion Designers of America.

Thomas Carlyle Ford was born on August 27, 1961, in Austin, Texas, the son of realtors Shirley Burton (née Shirley Ann Thrasher) and Thomas David Ford. He spent his early life in the suburbs of Houston, Texas, and in San Marcos, outside Austin. He rearranged furniture in the house at 6, and gave his mother feedback on her hair and shoes. His family moved to Santa Fe, New Mexico, when he was 11. In Santa Fe, he entered St. Michael’s High School and later moved to Santa Fe Preparatory School, from which he graduated in 1979.

At age 16, he enrolled at Bard College at Simon’s Rock, but quickly dropped out. He moved to New York City to study art history at New York University (NYU). There he met Ian Falconer, who took him to Studio 54 for the first time. Ford dropped out after a year, focusing on acting in television commercials.

Ford began studying interior architecture at The New School’s art and design college, Parsons The New School for Design in New York City. He kept visiting Studio 54, where he realized he was gay. The club’s disco-era glamor would be a major influence on his later designs. Before his last year at New School, Ford spent a year and a half in Paris, where he worked as an intern in Chloé’s press office, inspiring his interest in fashion. He spent his final year at The New School studying fashion, but graduated with a degree in architecture.

Ford is married to Richard Buckley (b. 1948), a journalist and former editor in chief of Vogue Hommes International; they have been in a relationship since meeting in 1986. The couple have a son, Alexander John “Jack” Buckley Ford, born in September 2012 via gestational surrogate. The family lived in Italy, where Ford moved from New York in 1990, and in London for 17 years. They live in his residences in New York, Los Angeles, Santa Fe, and London. Ford and Buckley have owned smooth fox terriers, which have appeared on the runway and in his film A Single Man. Ford also has a nephew with whom he shares a strong bond named Alex Ford Davis, the son of his sister.

Ford constructed a 24,000-acre private tract designed by Japanese architect Tadao Ando, in Santa Fe. It is called Cerro Pelon Ranch and has additional structures that were designed by Marmol Radziner. The property also has a fictional town known as Silverado that is used as a filming location for Western movies.

He told Vogue he had adopted a vegan diet after viewing a Netflix documentary called What the Health. As of 2019, he has been a teetotaler and has been open about using fillers and Botox.

He has said in multiple interviews that his first lover was the artist Ian Falconer, who went on to write and illustrate the very popular Olivia the Pig children’s book series. Ford maintains that he and Falconer are still good friends; decades after their breakup, Ford lent Falconer’s last name to the title character of his first movie, A Single Man (in the source novel the character originally only had a first name).

Politics
Ford is a Democrat. He opposed America’s invasion of Iraq in 2003, stating that it made him feel “ashamed to be an American”. His comment drew public criticism within America. He hosted a fundraiser for Obama. He voted for Hillary Clinton in the 2016 US general election.

Ford has advocated for federal recognition of same-sex marriage in the United States. In a 2009 interview, he said he preferred the term “civil partnership” for both opposite-sex and same-sex partnerships, and to leave “marriage” to religion to decide.

Ford maintains a policy of not dressing politicians regardless of party.

I think that whoever is the President, or the First Lady, should be wearing clothes at a price point that are accessible to most Americans, and wearing clothes made in America. My clothes are made in Italy, they’re very, very expensive. I don’t think most women or men in our country can relate to that, and I think the First Lady or the President should represent all people.

Ford has been recognized by important design and cultural councils worldwide, including the Cooper Hewitt Design Museum and Time.