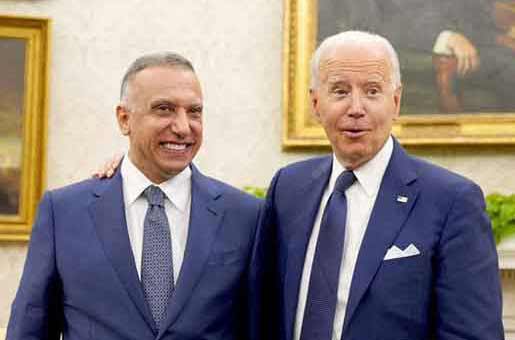 Washington: US President Joseph Biden has announced the end of the military mission in Iraq by the end of this year. However, counter-terrorism cooperation will continue.

After meeting with Iraqi Prime Minister Mustafa al-Qadimi at the White House, Biden said it would be a new phase for the 2,500 US troops still in Iraq. Our role in Iraq now is to be available, to continue training, to deliver aid, to help and to deal with whenever the Islamic State raises its head, but we will not be on the battlefield until the end of this year.

According to foreign media, US forces have played an active role in dealing with the Islamic State of Iraq and the Levant (ISIL). The new plan, announced by the United States, does not specify the withdrawal of troops from Iraq but will remain in place, but will provide training, logistics and advice to Iraqi forces instead of engaging in hostilities.

Iranian-backed armed groups operating in Iraq have been pressuring Prime Minister Mustafa al-Qadimi to end the US military presence on Iraqi soil as soon as possible. The decision comes three months before Iraq’s general election.

The United States has announced a halt to military operations in Iraq as the country prepares to withdraw from a 20-year war. However, Taliban fighters have made significant progress even before the full withdrawal.

A senior official said Iraqi troops had passed a combat test and could defend their country. Prime Minister al-Qadimi has also said that Iraqi forces are capable of taking over the country’s security.