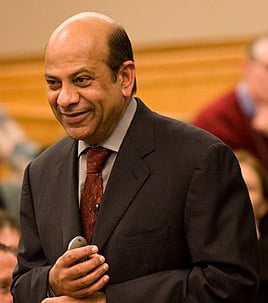 School of Business and Marvin Bower Fellow, 2015–16 at Harvard Business School. He worked as General Electric’s first chief innovation consultant and professor in residence from 2008–10. He is a New York Times and Wall Street Journal best-selling author and a two-time winner of the prestigious McKinsey Award for the best article published in Harvard Business Review. VG was inducted into the Thinkers 50 Hall of Fame in 2019 for his life-long work dedicated to the field of management, strategy, and innovation. VG received Thinkers 50 Distinguished Achievement Awards in two different cate

Vijay Govindarajan (born 18 November 1949), popularly known as VG, is the Coxe Distinguished Professor (a Dartmouth-wide chair) at Dartmouth College’s Tuck In 1974, Govindarajan received his chartered accountancy degree, where he was awarded the President’s Gold Medal by the Institute of Chartered Accountants of India, the award is given to the first ranked chartered accountancy student in India. Govindarajan went on to earn his M.B.A. from Harvard Business School in 1976 where he graduated with distinction. Two years later, he earned his D.B.A. from Harvard Business School where he was awarded the Robert Bowne Prize For Best Thesis Proposal.gories, a rare feat: Breakthrough Idea Award in 2011 and Innovation Award in 2019.

Govindarajan served as General Electric’s first Chief Innovation Consultant and Professor in Residence from 2008–10. While working at GE, Govindarajan co-authored a paper entitled “How GE Is Disrupting Itself” with Chris Trimble and GE’s CEO Jeffrey Immelt. “How GE Is Disrupting Itself,” which introduced the idea of reverse innovation.[3] HBR picked reverse innovation as one of the Great Moments in Management in the Last Century.