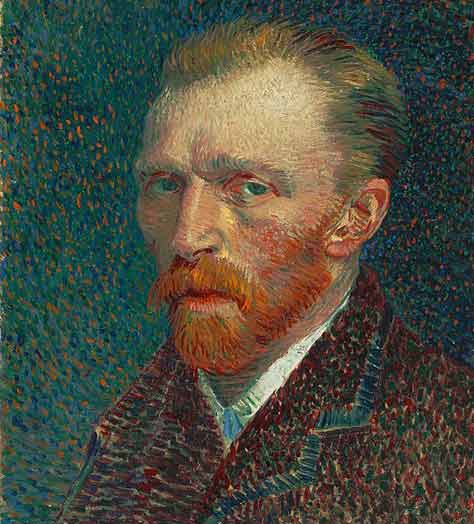 On view: Van Gogh Museum, The Metropolitan Museum of Art

Vincent Willem van Gogh (30 March 1853 – 29 July 1890) was a Dutch post-impressionist painter who is among the most famous and influential figures in the history of Western art. In just over a decade, he created about 2,100 artworks, including around 860 oil paintings, most of which date from the last two years of his life. They include landscapes, still lifes, portraits and self-portraits, and are characterised by bold colours and dramatic, impulsive and expressive brushwork that contributed to the foundations of modern art. He was not commercially successful, and his suicide at 37 came after years of mental illness, depression and poverty.

Born into an upper-middle-class family, Van Gogh drew as a child and was serious, quiet, and thoughtful. As a young man he worked as an art dealer, often travelling, but became depressed after he was transferred to London. He turned to religion and spent time as a Protestant missionary in southern Belgium. He drifted in ill health and solitude before taking up painting in 1881, having moved back home with his parents. His younger brother Theo supported him financially, and the two kept a long correspondence by letter. His early works, mostly still lifes and depictions of peasant labourers, contain few signs of the vivid colour that distinguished his later work. In 1886, he moved to Paris, where he met members of the avant-garde, including Émile Bernard and Paul Gauguin, who were reacting against the Impressionist sensibility. As his work developed he created a new approach to still lifes and local landscapes. His paintings grew brighter in colour as he developed a style that became fully realised during his stay in Arles in the south of France in 1888. During this period he broadened his subject matter to include series of olive trees, wheat fields and sunflowers.

Van Gogh suffered from psychotic episodes and delusions and though he worried about his mental stability, he often neglected his physical health, did not eat properly and drank heavily. His friendship with Gauguin ended after a confrontation with a razor when, in a rage, he severed part of his own left ear. He spent time in psychiatric hospitals, including a period at Saint-Rémy. After he discharged himself and moved to the Auberge Ravoux in Auvers-sur-Oise near Paris, he came under the care of the homeopathic doctor Paul Gachet. His depression continued and on 27 July 1890, Van Gogh shot himself in the chest with a Lefaucheux revolver. He died from his injuries two days later.

Van Gogh was unsuccessful during his lifetime, and was considered a madman and a failure. He became famous after his suicide, and exists in the public imagination as the quintessential misunderstood genius, the artist “where discourses on madness and creativity converge”. His reputation began to grow in the early 20th century as elements of his painting style came to be incorporated by the Fauves and German Expressionists. He attained widespread critical, commercial and popular success over the ensuing decades, and is remembered as an important but tragic painter, whose troubled personality typifies the romantic ideal of the tortured artist. Today, Van Gogh’s works are among the world’s most expensive paintings to have ever sold, and his legacy is honoured by a museum in his name, the Van Gogh Museum in Amsterdam, which holds the world’s largest collection of his paintings and drawings.

Vincent Willem van Gogh was born on 30 March 1853 into a Dutch Reformed Church family in Groot-Zundert, in the predominantly Catholic province of North Brabant in the Netherlands. He was the oldest surviving child of Theodorus van Gogh, a minister of the Dutch Reformed Church, and Anna Cornelia Carbentus. Van Gogh was given the name of his grandfather, and of a brother stillborn exactly a year before his birth. Vincent was a common name in the Van Gogh family: his grandfather, Vincent (1789–1874), who received a degree in theology at the University of Leiden in 1811, had six sons, three of whom became art dealers. This Vincent may have been named after his own great-uncle, a sculptor (1729–1802).

Van Gogh’s mother came from a prosperous family in The Hague, and his father was the youngest son of a minister. The two met when Anna’s younger sister, Cornelia, married Theodorus’s older brother Vincent (Cent). Van Gogh’s parents married in May 1851 and moved to Zundert. His brother Theo was born on 1 May 1857. There was another brother, Cor, and three sisters: Elisabeth, Anna, and Willemina (known as “Wil”). In later life Van Gogh remained in touch only with Willemina and Theo. Van Gogh’s mother was a rigid and religious woman who emphasised the importance of family to the point of claustrophobia for those around her. Theodorus’s salary was modest, but the Church supplied the family with a house, a maid, two cooks, a gardener, a carriage and horse, and Anna instilled in the children a duty to uphold the family’s high social position.

Van Gogh was a serious and thoughtful child. He was taught at home by his mother and a governess, and in 1860 was sent to the village school. In 1864, he was placed in a boarding school at Zevenbergen, where he felt abandoned, and campaigned to come home. Instead, in 1866 his parents sent him to the middle school in Tilburg, where he was deeply unhappy. His interest in art began at a young age. He was encouraged to draw as a child by his mother, and his early drawings are expressive, but do not approach the intensity of his later work. Constant Cornelis Huijsmans, who had been a successful artist in Paris, taught the students at Tilburg. His philosophy was to reject technique in favour of capturing the impressions of things, particularly nature or common objects. Van Gogh’s profound unhappiness seems to have overshadowed the lessons, which had little effect. In March 1868, he abruptly returned home. He later wrote that his youth was “austere and cold, and sterile”.

In July 1869 Van Gogh’s uncle Cent obtained a position for him at the art dealers Goupil & Cie in The Hague. After completing his training in 1873, he was transferred to Goupil’s London branch on Southampton Street, and took lodgings at 87 Hackford Road, Stockwell. This was a happy time for Van Gogh; he was successful at work, and at 20 was earning more than his father. Theo’s wife later remarked that this was the best year of Vincent’s life. He became infatuated with his landlady’s daughter, Eugénie Loyer, but was rejected after confessing his feelings; she was secretly engaged to a former lodger. He grew more isolated, and religiously fervent. His father and uncle arranged a transfer to Paris in 1875, where he became resentful of issues such as the degree to which the firm commodified art, and was dismissed a year later.

Van Gogh’s nephew and namesake, Vincent Willem van Gogh (1890–1978), inherited the estate after his mother’s death in 1925. During the early 1950s he arranged for the publication of a complete edition of the letters presented in four volumes and several languages. He then began negotiations with the Dutch government to subsidise a foundation to purchase and house the entire collection. Theo’s son participated in planning the project in the hope that the works would be exhibited under the best possible conditions. The project began in 1963; architect Gerrit Rietveld was commissioned to design it, and after his death in 1964 Kisho Kurokawa took charge. Work progressed throughout the 1960s, with 1972 as the target for its grand opening.

The Van Gogh Museum opened in the Museumplein in Amsterdam in 1973. It became the second most popular museum in the Netherlands, after the Rijksmuseum, regularly receiving more than 1.5 million visitors a year. In 2015 it had a record 1.9 million. Eighty-five percent of the visitors come from other countries.